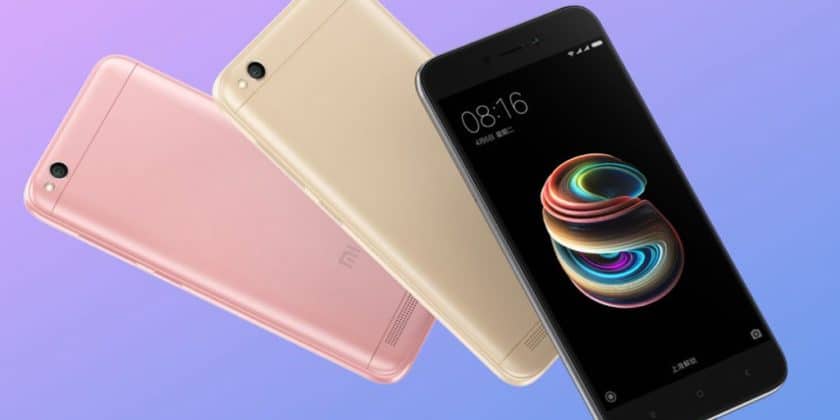 Xiaomi has announced the launch of Redmi 5A in India, following its launch in China in October. The phone is marketed as the ‘Dekh ka Smartphone’ in the country and has a feasible price tag at INR 4,999. The Redmi 5A comes with a metallic matte finish and offers eight days of standby battery. The phone features a microSD card slot for storage expansion. It comes equipped with a 13MP rear camera with Phase Detection Autofocus (PDAF) for fast focusing and an f/2.2 aperture.It will be available in three colors: Dark grey, Gold and Rose gold.

According to reports, the Redmi 5A will also come with MIUI 9 preloaded, which will help the battery performance of the smartphone. Redmi 5A is a successor to the hugely-popular Redmi 4A which sold four mn units within eight months of its launch. Redmi 5A stands as a testament to Xiaomi’s continued efforts to offer high-end technology while making it accessible to as many people as possible.

Powered by the Qualcomm Snapdragon 425 quad-core processor, Redmi 5A delivers fast and smooth performance. The phone comes with a 2+1 card slot that supports simultaneous use of two 4G nano SIM cards and a microSD card up to 128GB, a feature customized considering the usage habits of India’s Mi Fans. Redmi 5A boasts a 5-inch fully-laminated HD display and houses a 3000mAh long-lasting battery.

The Indian variant of Xiaomi Redmi5A comes with microSD card slot whereas the China variant has a hybrid dual SIM Slot. Xiaomi has also introduced a 3GB RAM, 32GB storage variant in India whereas China only had 2GB RAM and 16GB storage variant.

Two variants of Redmi 5A will be made available for Indian buyers:

The INR 1,000 discount on the 2GB + 16GB version of Redmi 5A reflects a gift from Xiaomi India towards all its Mi Fans for making the brand No. 1 in the country. This means that in total, Xiaomi India will be giving back INR 500 crore to the Mi Fan community in India.

Manu Jain, Vice President, Xiaomi and Managing Director, Xiaomi India said, “We strongly believe that the best of technology should be made accessible to as many people as possible, because technology can improve lives. With Redmi 5A we take another step in offering a great all-round experience for users looking for their first smartphone. We believe Redmi 5A is the smartphone for everyone.

Xiaomi is a community driven by fans, and to celebrate their contribution towards making Xiaomi the No.1 brand in India, we’ve taken this huge step to give back INR 500 crore back to community and offer Redmi 5A at INR 4,999 for the first five million units. This is, as far as we know, something no other brand has ever done before in India. We would like other technology brands to join us in making high-quality products while making them extremely accessible and contribute towards a digital India.”

The smartphone will be available from 12 noon, 7 December 2017, across Flipkart, Mi.com, and Mi Home stores, followed by offline retailers including Mi Preferred Partners in the subsequent weeks.

Xiaomi announced the second league of PatchWall Binge Award winners. Rolling out a number of…

In India, the lending industry is on an explosive trajectory. As per a recent report…