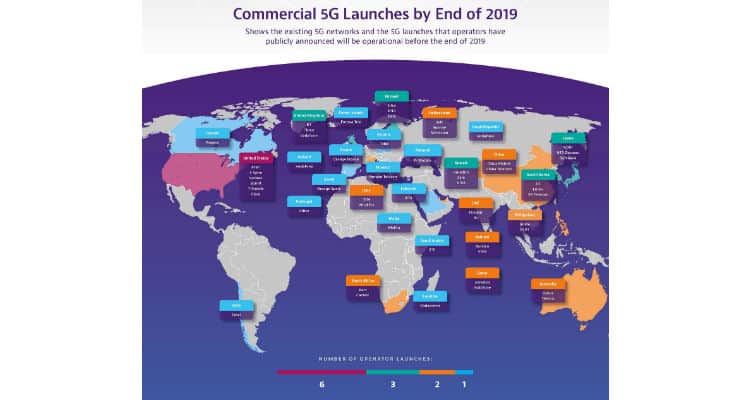 VIAVI Solutions has unveiled new industry data demonstrating just how quickly 5G networks are rolling out worldwide, with 55 commercial 5G networks expected to be live before the start of 2020 — the year that 5G was originally expected to debut. As an indicator of the pace of commercialization, VIAVI has renamed this report – now in its third year – The State of 5G Deployments.

A total of 13 commercial 5G networks were launched during 2018, including both mobile and fixed wireless deployments. As the race to deliver 5G rapidly escalates, VIAVI findings indicate that deployments will more than triple this year, with 42 new network launches anticipated in 2019. As a result, a total of 55 live 5G networks are expected to be in service by the end of this year. A large proportion of these deployments will be located in Europe and the Middle East (21 and 14, respectively), followed by 10 in Asia, 8 in the Americas and 2 in the Australasia region.

The pace of commercial deployments is a clear indication of the competition to offer 5G services. At this time last year, only 28 service providers had reported that they were in field trials with 5G architecture. This rapid escalation of deployment plans comes in spite of the fact that 3GPP standards for 5G are not expected to be final until 2020. Thus, even though the schedule for network launches has accelerated, service providers need to be careful about finalizing architectures, and detailed technical information about deployment plans is still limited at this point.

“5G represents a paradigm shift in the way that networks are designed, deployed and managed, introducing inherent complexities in the architecture as well as exacting demands on performance and latency,” said Sameh Yamany, Chief Technology Officer, VIAVI. “The anticipated improvements that 5G offers will depend on precise operation of multiple elements throughout the network. As service providers worldwide deploy and activate their commercial networks, they are relying on VIAVI 5G test solutions, from the lab to the field, to ensure optimal customer experience and quality.”

The data was compiled from publicly available sources for information purposes only, as part of the VIAVI practice of tracking trends to enable cutting-edge technology development. The State of 5G Deployments serves as a companion document to the VIAVI Gigabit Monitor, a visual database of gigabit internet deployments worldwide.