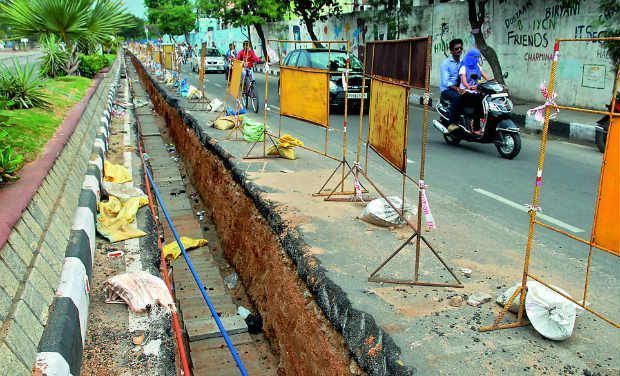 By March 31, 2015, the NOFN had covered about 20,000 villages. Once implemented properly, it would help the government to provide e-services and e-applications nationally.

Interestingly, the project was formally approved by the Congress-led Dr Manmohan Singh government in December 2011 with the vision of increasing affordable and high-quality access to a number of digital services (including Internet access, cable television and e-governance services).

The initial design for the NOFN consisted of a uniform 24-core fibre that was projected to deliver speeds of 100 Mbps for all GPs in India.

Going ahead, as of September 2015, the total number of broadband (defined as download speeds >=512 Kbps) subscribers stood at 120.88 million (largely concentrated in Andhra Pradesh, Delhi, Karnataka, Kerala, Maharashtra and Tamil Nadu), with only 27.20 million rural subscribers. This “internet divide” between rural and urban India has become more relevant as the scope of activities carried out on the Internet has expanded beyond what was previously imagined.

Last year, an expert committee had suggested the need to involve the State Governments and private sector stakeholders by way of “Centre-State-Public-Private-Partnership” and recommended that  Engineering, Procurement and Construction (EPC ) contracts be awarded by Bharat Broadband Network Limited (BBNL) to private parties with requirements for interconnection and infrastructure sharing.

The NOFN design considered that centralized allocation of responsibility would facilitate the coordination of activities of several entities at various levels of network architecture and stages of project execution.

The Central Government created a special purpose vehicle (SPV),  BBNL, to act as the executing agency responsible for overseeing the project, determining reference prices for each activity, and procuring optical fibre.

Team consisting of incumbent CPSUs was instated to undertake preparatory activities related to deployment including granular aspects of network design and drafting the bid package. BSNL, RailTel and PGCIL were responsible for trenching and ducting as well as laying the fibre.

Quarterly progress from January 2015 and February 2015 indicated that NOFN had been falling short of its targets, though the pace of deployment has increased over time.

According to BBNL, the tenders for activities of trenching, ducting and laying fibre have been signed for over 50,000 GPs, but only 3,384 GPs had been connected as of November 2015.

The scope of the concessionaire’s work should include both the deployment and implementation of the OFC and other network infrastructure as well as operating the network for the concession period. Concessionaires shall be entitled to proceeds of revenue from dark fibre and/or bandwidth.

Concessionaires should be selected by way of a reverse bidding process to determine minimum Viability Gap Funding sought for concession. The area of implementation may be analogous with the Licensed Service Areas (LSAs)/or the State/UT. The use of a reverse bid process to determine lowest VGF sought can ensure that the amount of support from public funds is rational.

The Contracting Agency may, in the first phase, explore the appetite and response of the potential BOOT participants through bidding process. This can either be done in one go for the entire country (by having States/LSA or packages as ‘Schedules’) or it can be done beginning with certain States with larger potential of bidders’ response.

In the second phase (after excluding those area where BOOT model can be implemented), EPC contractor may be selected. Such EPC contractor should be responsible for building the network and will have defect liability period of two years after completing the network. When the network is about to be completed, the Contracting Agency should engage a third party (through bidding process) who should be responsible for managing and marketing thenetwork as per the broad principles laid down by the Government. The overlapping defect liability period of two years should be used to ensure smooth transition from construction to maintenance phase.

The VGF payments should be divided into two components- an initial capital expenditure amount to allow the concessionaire adequate funds to meet initial capital costs and to be able to raise complementary finance from financial institutions at reasonable rates, and the rest should be annualised over the concession period and be paid out on the achievement of predefined milestones. Early achievement of the milestones would merit early payments incentivizing speedy delivery.

The two components must be carefully balanced over the concession period – while excess payment at the initiation stage can result in the risk of poor quality delivery, not providing concessionaires with sufficient funding in the beginning will necessitate the deployment of more expensive private finance (the additional costs of which will end up being reflected in the VGF bidding process and thus come from public funds).

The period of concession should be coterminous with the technical life of the fibre at present the consensus on this is 25 years. Such a period should be sufficient time to align the concessionaire’s incentives with high quality installation for service delivery, while also providing a large enough window to make a reasonable profit. The period may be further extended in blocks of 10/20/30 years after concession period at the mutual agreement of the Government and the concessionaire.

Exceptionally high windfall profits may be dealt with by way of a one-time “windfall tax” and the suspension of further VGF support.

However, such measures must be clearly outlined at the outset prior to the bidding stage, in order to ensure the necessary stability and predictability to encourage private sector involvement in this

manner of long term infrastructure project. A clear definition of what shall be considered a windfall profit must thus be provided a priori to bidders, in order to allow this to be factored into their financial and outlay plans.

Care must be taken to ensure that the concessionaire provides access to all service providers in a non-discriminatory and transparent manner. Such competition is essential given that all manner of content (including entertainment, entitlements and Government services) will be delivered on the network.

In addition the relationship between the concessionaire and the service provider should be at arm’s length. This can be ensured by mandating a legal separation of the businesses of infrastructure provision and service provision in case of overlapping interests to preclude the possibility of a vertically integrated entity abusing its position.

Conditions requiring concessionaires to adhere to a maximum set price can ensure service provision at an affordable level and prevent anti-competitive conduct. Such a requirement can be included within the terms of the concession agreement as well as be a prerequisite for the provision of Viability Gap Funding.

The maximum price ceiling for wholesale of bandwidth and its evolution over time can be set by the Authority and revised from time to time (or left under forbearance), while retail pricing can be left to market forces subject to the usual competitive safeguards.

Liberal eligibility criteria that allows for broad participation is necessary to ensure the participation of a large number of bidders and guarantee a strong and competitive auction process to enable optimal price discovery.

There is no need to place a cap on participation in the bidding process – however a cap should be set on the number of implementation areas that are allocated. This can ensure that the

bidders’ capacity and resources are not stretched thin due to winning bids for too many areas. (Para 3.45)

Any bidding agency/consortium with winning bids in more than the maximum number of implementation areas permitted for allocation can be allowed to choose the areas it wishes to be allocated.

As winning bidders maximize allocations slots available to them they will be removed from consideration. In the remaining areas the agency/consortium with the second best bid may be offered the implementation contract on the same terms as under the winning bid. However where areas remain but the winning L1 bidders no longer have allocations slots available, the L2 bidder may be engaged.

Concessionaires be provided with flexibility in terms of route for laying optical fibre, choice of construction, topology and technology in order to ensure technical as well as economic efficiency. This flexibility is subject to the same standards of redundancy and quality as outlined for BharatNet by the Committee on NOFN.

Concessionaires be encouraged to and have the flexibility to deploy large amounts of dark fibre in order to ensure that the network remains future proof and easy to upgrade.

The Central and State Governments act as anchor clients to purchase a minimum amount of bandwidth (100 Mbps) to be purchased at market prices for the provision of services. Additionally, the mandating of a minimum amount of fibre (eg. 50%) be set aside for use by other service providers in order to encourage competition may be considered.

RoW is perceived as a major risk factor by the private sector, safeguards recognising such a possibility and outlining the steps to be taken must be put in place under the agreement to attenuate such risk and encourage participation. Guaranteed provision of free RoW is a necessary andnon-negotiable precondition to successful deployment of BharatNet, subject to the reinstatement of public property to its original condition.

The Central and State Government should additionally consider becoming involved with the concessionaire by becoming a minority equity partner (~26%) in the selected consortium – this can reduce the perceived risks and thus lower the costs of obtaining private finance while also automatically solving the risks associated with windfall profits. In addition, this can help the Government check monopolistic behaviour on the part of the concessionaire.

Last but not the least, capacity enhancement at BBNL is essential. A structural rehaul to bring in professional management (perhaps by way of secondment of experts from the private sector) as well as to restructure the organization along the lines of the Delhi Metro Rail Corporation may be considered.

Telcos Invest 9,000 Crore in Telecom Infrastructure During the Pandemic

During the last year telcos added telecom infrastructure worth around Rs 9,000 crores, in a…