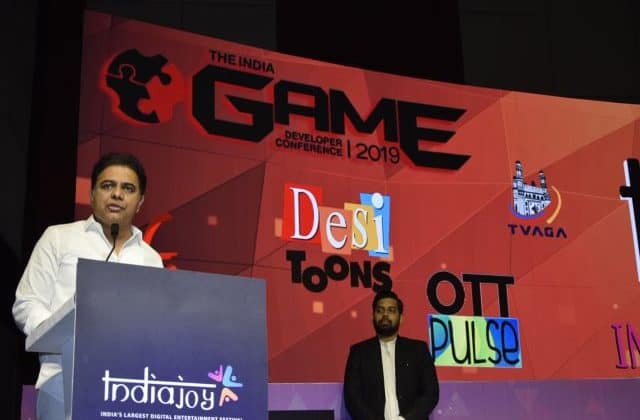 Indiajoy 2019, India’s biggest Gaming, Media, and the Entertainment Festival, kicked off on Nov 20th at Hyderabad. A beeline of gaming enthusiasts, experts, entrepreneurs, youth, influencers, and government representatives have made it to the show.

As the Indian Media and Entertainment (M&E) industry is poised to touch INR 1,631 billion,  the 2nd edition of Indiajoy has become one of the most important platforms in the world for projecting the digital, media and entertainment corporations to engage in business, DIY, and networking.

In his opening remarks after inaugurating Indiajoy, KTR, IT & MU&D Minister Government of Telangana said, “We plan to make Telangana a hub for the South Asian industry in the gaming, technology and entertainment space with world-class technicians,  post-production facilities, VFX setup. VFX, post-production work for Hollywood movies and something like our very own Chota Bheem are done within the State already. Besides, we are happy that the State houses over 250 gaming startups and the number is only growing with time. Nearly one-third of the world’s population is into the gaming sector.”

The minister further expressed, “As per research, the animation industry is a $270 billion market which has taken a huge leap with technological advancements over the years. It’s important to make localized animation content and usher in regional content for OTT platforms because the market potential is huge.”

“On the future course, we plan to build an Image tower in the city spread over 16 lakh square foot that could help global giants with anything from animation to visual effects to gaming to motion capture technologies. We seek to provide employment to those residing in tier-2 and tier-3 towns. We are easing the policy to encourage more firms to set shop in the State. Our main goal through an event like Indiajoy is to help SMEs in this space flourish and also ring in more publishers, marketeers, local producers and help them find their feet in Telangana.”

Over 30,000 visitors are expected to converge during the 4-day event, held at HICC from Nov 20-23rd. The organizers believe that IndiaJoy also aims to serve as a catalyst for Indian media, gaming and digital entertainment companies on the world stage.

The inaugural spectacle witnessed a big gathering of some of the biggest names from the industry and enthusiasts from different parts of the world.

At the VFX Summit some of the interesting sessions like State of the Art 2019 & Roadmap 2020 – 2023 by Biren Ghose, 38 years of Digital. VFX & How We Got to Where We are Now – Tim’s Historical Perspective, Tim McGovern and Green Gold presentation of Kungfu Dhamaka VFX Binayakdas & Kaizer Mandal. VFX summit Day 2 will also see an interesting session on The Lion King- Technology Breakdown by Shajy Thomas.

Among the big spotlight at Indiajoy will be on IGDC (India Game Developer Conference) on the 3rd and 4th day, which has emerged as the most productive platform for investors, publishers, and gaming companies to engage with each other will be held from 22nd to 23d.

Indiajoy is bringing together 1000+ International delegation to the event that will boost Hyderabad’s visibility in the global VFX, Toons, Gaming, and Entertainment industry while exploring the huge India market as well as markets in Southeast Asia and other emerging markets.

Last week, this year’s Indiajoy festival including the India Game Developer Conference came to a…