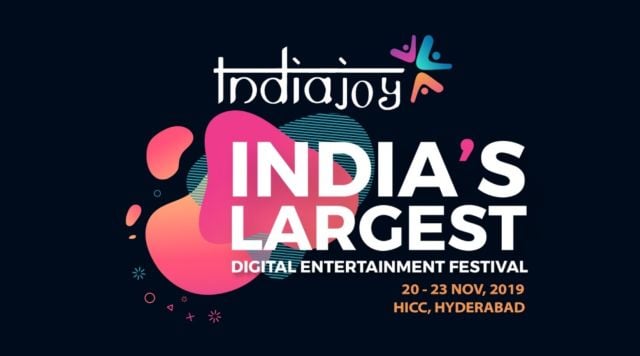 Come November 20th, Hyderabad will host the IndiaJoy Festival, which is regarded as one of the most important platforms in the world for Digital, Media and Entertainment Corporations to engage in business to business (B2B) and Business to Government (B2G) exchanges. IndiaJoy Festival in its 2nd year is supported by the Government of Telangana.

With more than 30,000 visitors, the festival will be spread across 2 of the biggest event venues in India HICC and Hitex in Hyderabad. The 4-day conclave from 20-23rd November is expected to serve as a springboard for Indian media, entertainment companies on the world stage.

The conclave will have a line up of 9 events that include IGDC (India Game Developer Conference), Desi Toons, VFX Summit, InfluencerCon, Investor-Publisher Connect, E-Sports, OTT Pulse and the Indiajoy Music Fest.

The organizers of the conclave and the Government are expecting a participation of 1000+ International delegation and is expected to boost Hyderabad’s visibility in the global VFX, Toons, Gaming, and Entertainment industry while exploring the huge India market as well as markets in Southeast Asia and other emerging markets.

The government is determined to help the Visual Effect, Gaming and Animation Industry so it is gearing up to show up Hyderabad and Indiajoy Festival to demonstrate the local talent creativity and soft power.

Jayesh Ranjan, Principal Secretary Government of Telangana said, IndiaJoy festival is the window to the world to witness, engage, with the finest minds in gaming, VFX, the animation industry in India. Government of Telangana is committed to making this as a global scale platform, we are pleased to say the event has become bigger, with wider global participation, including investors, publishers, and gamers, who are equally excited as much as we are.  We anticipate many B2B and B2G collaboration and deals during IndiaJoy 2019.”

Posted by: VoicenData Bureau
View more posts
Hyderabad gets ready for four-day conclave on mega gaming and entertainment event 0 out of 5 based on 0 ratings. 0 user reviews.
TO THE NEW appoints TK Verma as Head of Enterprise Business for US
Detel’s TV & Accessories now available at Walmart Stores