Last week, this year’s Indiajoy festival including the India Game Developer Conference came to a close with great zest at HICC, Novotel in Hyderabad, with the gamer community across several countries, developers and global companies in impressive attendance. 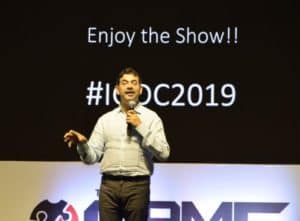 Voice&Data interacted with Telangana’s Principal Secretary, IT and Industries, Jayesh Ranjan for a quick Q&A to know more about the state’s initiatives.

Voice&Data: What are the key takeaways from this year’s Indiajoy event?

Jayesh Ranjan: Over 25-30 top gaming companies, who have changed the face of the industry, have made this event one-of-a-kind. This is a not-for-profit event and we’re glad to be receiving great support from sponsors and gaming enthusiasts from various corners of the globe. Held as part of Indiajoy 2019, the country’s premier gaming, media, and entertainment event hosted by industry volunteer with support from Government of Telangana, the conference – IGDC – redefined the way gaming is perceived in India and nurtured a community without barriers. With several talks, workshops, panel discussions, e-sport tournaments, the two-day conference had everything to ensure an adrenaline rush to its attendees.

The key take away from this year’s event is the plan to help UK universities build their off-campus sites in Telangana to educate more people about gaming. Also, the Image Tower, that we plan to construct by the end of 2020, promises to redefine the gaming industry in the country, where we provide excellent infrastructure and a welcoming business-friendly environment that would encourage investment.

The brain behind one of the biggest success stories in the gaming space in recent times, Tencent Games too made its presence felt at the event.

Voice&Data: What other plans does the Gov of Telangana have for the gaming industry?

Jayesh Ranjan: There is a great need to come up with world-class educational institutions in the State to foster budding gaming enthusiasts. A Centre of Excellence for the gaming, animation, and VFX is in the offing. We plan to make IGDC an annual series in the city and hope to provide a rewarding and rich experience for everyone who’s part of it – that is for the gamers, developers, companies. Unreal Engine ahead of its launch in the country hoped to educate more people about gaming.

Telangana poised to be the hub for South Asia’s gaming, technology & entertainment industry: IT Minister KTR