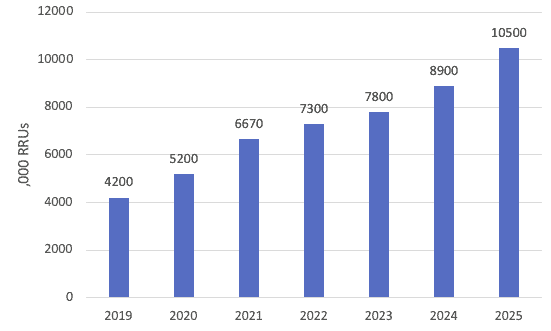 Increased diversity will generate significant new deployments and scale this year. That means diversification of

* the type of cells and architectures that will be deployed
* the spectrum bands they will be in
* the vendors which will supply them
* the use cases and business models they will support
* the kind of operators that will deploy them
* the organizations defining relevant standards/specifications.

All of that will create a firm foundation for a new wave of densification that will be able to support almost any business model and service. That, in turn, will improve the economics of bringing 4G and 5G to underserved users, whether those are in rural and remote areas or in indoor environments with poor signal.

These trends will lead to healthy growth in deployment numbers. SCF will publish its definitive Market Status forecast ahead of Small Cells World Summit, but preliminary figures already point to a global increase of about 150% in small cells (across all environment) between 2019 and 2025.

Our predictions for the year ahead explain the multiple changes that will drive that kind of growth. Over the past weeks, the Forum has been polling members’ opinions to feed into the work programme for 2020, and of course the agenda for our flagship event, the Small Cells World Summit in London in May, and that process has resulted in clear views of what will be important in our industry in this landmark year.

Small cells will be in the forefront of virtualization and open RAN
Small cells in 2020 do not look like those of a few years ago. There are many form factors, to suit different environments, and this year, we envisage even greater variety. From tiny cells that can be embedded in pavements or home equipment, to macro-equivalent access points to mount on lamp-posts, there will be a great diversification of designs to suit every use case.

This will be the first year when operators start to deploy disaggregated, virtualized small cell networks. The commercial adoption of virtualized RAN is challenging, but many operators expect to take their first steps in their small cell layer, providing valuable experience of how to manage and orchestrate a network in which multiple radio units share common baseband functions, some of them deployed on cloud infrastructure.

Open architectures with common interfaces between network elements (between central and radio units, or between multiple cells) will start to gain commercial support. These will be essential to drive confidence and uptake, especially of the new disaggregated architectures. SCF’s work on open interfaces such as nFAPI will play a valuable role, alongside the work of partners such as ORAN Alliance and Telecom Infra Project.

Several operators have committed to large-scale deployments based on these open platforms. Vodafone and Telefonica both have major invitations to tender based on ORAN/TIP, while NTT Docomo and Etisalat have embarked on roll-outs. As with vRAN, most operators are focusing on greenfield, small cell networks, as well as rural environments, for their initial forays into open platforms.

New sources of spectrum will widen the pool of small cell deployers
Last year laid a lot of important foundations when it comes to putting spectrum in the hands of a larger number of providers. In 2020, those regulatory moves will translate into commercial deployments. As many of the bands involved are relatively high frequency, they will be best suited to small cells. And a primary motivation for opening up spectrum is to support more localized networks, for cities or industries perhaps, which will also drive small cell roll-out.

The USA’s CBRS band in 3.5 GHz, with its multiple tiers of access, will be a significant source of new small cell deployment this year, in many environments from rural access to industrial private networks to mobile hotspots. Other examples include the UK’s new licences which will allow lightly licensed access to millimeter wave bands in future, and sharing of some MNO spectrum when it is underused by its owners. Both these schemes aim to allow new entrants to deploy networks and services at low cost, and to support networks for specific enterprises and campuses.

We expect more regulators to follow suit in 2020, and by the end of the year the spectrum picture for small cell operators will be far more fragmented. Private networks, industrial services, smart city networks and rural communities will be the big beneficiaries.

Small Cells World Summit session – ‘Small cell regulation, policy and local authorities’
Coverage is not just a rural issue – neutral hosts will extend it to industrial and indoor use cases

Unlike 3G and 4G, the greater capabilities of 5G have given it a central role in the digital and industrial strategies of many governments. That, in turn, has led many countries to set coverage targets associated with spectrum licences. By contrast with previous generations, mobile coverage is not just related to extending broadband access to rural and remote communities. There are also significant coverage challenges for users in industrial sites such as factories and mines; for major transport routes; and for indoor environments, especially large office, industrial and apartment buildings.

All these can be addressed effectively with small cells, but the business case can be challenging for conventional mobile operators as this involves fragmented deployment, with each indoor or enterprise network needing to be optimized for its particular users. This is why we expect to see many regulatory decisions to extend spectrum ownership to private network operators and neutral host providers, which can make a strong business case to address a particular area of coverage.

Shared and enterprise spectrum will accelerate the emergence of neutral host operators deploying small cell networks for specific locations or industries, and to maximize their value, these will need to support roaming with multiple operators. We predict that the adoption of neutral host models to fill major coverage gaps could increase the total small cell base by over one million units worldwide by 2025, compared to our base forecast.

SCF will have many work items focused on technical specifications and commercial frameworks, to lower barriers to neutral host and multi-operator infrastructure and so extend coverage and mobile services.

Regulators and industries will finally find common cause on infrastructure
Another key enabler of better urban, rural and industrial coverage will be simpler, streamlined regulation of cell sites in cities, villages and transport networks. It has been a tortuous process to achieve the kind of regulatory frameworks that would make access to infrastructure such as lamp-posts simple and affordable, but SCF has played a major role in persuading city authorities and other key regulators of the benefits of light-touch rules for site and equipment approvals.

The need to extend coverage to support the new citizen and enterprise services envisaged for 5G, will make 2020 a tipping point in terms of awareness and action among authorities. However, a significant point of concern for some cities, centers on potential health concerns. To prevent these fears becoming a brake on densification, in situations where there are no visible risks, will require organizations like SCF to improve access to objective, fact-based information and to contribute to industry efforts to test emerging technologies and understand their behaviour.

Automation will revolutionize the economics of dense networks
Another long-standing barrier to densification has been the cost and complexity of managing very large numbers of elements, not just access points but potentially edge computing nodes, localized cores and distributed radio units. To slash the operating cost of large small cell networks, and make them responsive in near-real time to changing traffic patterns, automated planning and management are critical.

We believe 2020 will be the year when planning and automation processes come of age for dense 4G and 5G networks. Already, SCF has published a landmark paper on ultra-precise cell planning and will shortly release a paper on the evolution of self-optimizing networks (SON) to 5G-era automation. These will be foundations for a significant expansion of capabilities for planning, managing and optimizing small cell networks, which could reduce total cost of ownership by as much as 40% by 2025 in some scenarios.

The most important new developments will be extension of full automation from SON to every aspect of RAN optimization, and the evolution of management technologies to address virtualized networks, and the orchestration of physical and virtual network functions together. Standards will start to gain widespread commercial adoption in 2020, further improving the economics, and a key goal for SCF will be to establish open specifications in the small cell layer, to complement more macro-focused initiatives such as ONAP (Open Network Automation Protocol).