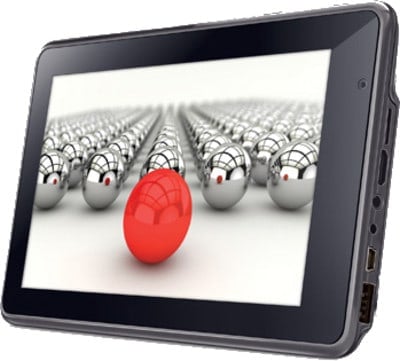 NEW DELHI: Propelled by low-cost products, iball has become the market leader in the Indian tablet space followed by Samsung which held the first position earlier, according to research firm IDC which revealed the data on the basis of fourth quarter of 2014.

iBall’s growth was backed by low cost products targeted at consumers looking to own entry level form factors. The brand is actively engaged in expanding its retail presence as well as geographical reach, the research agency said.

Datawind stood at the third spot with 9.6% market share in the quarter, followed by Lenovo and HP with 9.4% and 8.7% market shares, respectively.

The overall tablet market in the country however posted a growth in the quarter. The market reported shipments of 0.96 million units in the fourth quarter, a quarter-on-quarter growth of 3.6%.

Strong performance of local players as well as increasing interest of the PC OEMs in the tablets space contributed to the expansion of the market over the third quarter.

According to the research firm, 7 inch tablets placed in less than $150 price band populate the market and will continue to do so in the foreseeable future. While Android still has majority of the pie, the agency sees vendors exploring the 8-9 inch Microsoft Windows OS based form factor.

Additionally, IDC expects 4G tablets to pick up as more service providers rollout their LTE spectrums by the second half of 2015. The firm also anticipates 2015 to kick start with large government and education projects feeding the commercial segment.

“The consumer space will continue to be led by the local brands and we may see re-entry of some of the older players in the top five vendor list. On a yearly basis, we expect 2015 to post single digit growth over 2014,” the firm added.