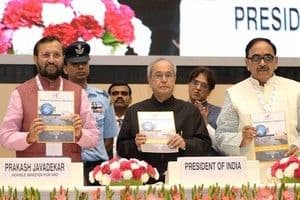 MUMBAI: National Academic Depository (NAD) is an initiative undertaken by MHRD for digital issuance, storage and access of all academic certificates issued by academic institutions in the country, will be implemented through NSDL Database Management Limited (NDML), a wholly owned subsidiary of NSDL which is the largest depository of India.

The National Academic Depository was launched by Hon’ble President of India, Pranab Mukherjee in the presence of Hon’ble Minister of Human Resource Development, Prakash Javadekar and Hon’ble Minister of State for Human Resource Development (Higher Education), Dr Mahendra Nath Pandey. The Ministry of Human Resources Development (MHRD), Government of India, University Grants Commission (UGC) and All India Council for Technical Education (AICTE) during “National Conclave on Digital Initiatives in Higher Education” at an impressive ceremony at Vigyan Bhawan in New Delhi. Vice Chancellors of all the Universities in India, Directors / Heads of IITs, IIMs and other Academic Institutions participated in the conclave.

Under NAD every student will have a digital account to which all certificates issued by various academic institutions will be credited in digital format. Students will be identified uniquely by their Aadhaar number. NAD will eliminate paper, mitigate the risk of fake and forged certificates and enable online, electronic authentication of certificates by employers and higher education institutions.

Speaking on the occasion, G V Nageswara Rao, MD & CEO, NSDL said, “NDML is proud to be part of NAD initiative and NDML looks forward to bringing to educational sector the same benefits that NSDL as a securities depository brought to capital markets.”

Central Board of Secondary Education (CBSE) became the first academic institution to join NAD through NDML. CBSE certificates for the academic year 2016-17 have been made available in NAD.

At this event some of the most awaited student-centric digital initiatives for higher education were dedicated to the service of the nation. Besides the National Academic Depository, Hon’ble President also launched SWAYAM, a large portal of Massive Open Online Courses for Indian students and SWAYAM Prabha, a bouquet of 32 online DTH channels dedicated to higher educational content.

Indian banks are not digitally there yet! A wide gap persists, says AI expert Anand Subramaniam