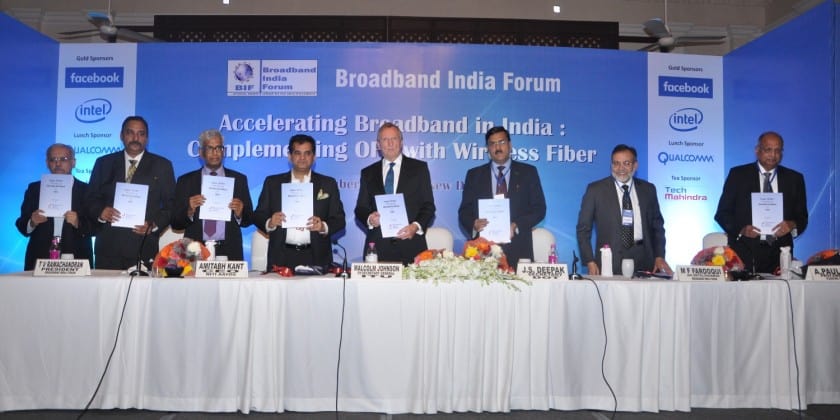 NEW DELHI: The Government is looking at the next area of reforms and the usage of higher frequency spectrum in the milimeter wave is definitely a focus area for us, according J.S. Deepak, Secretary of the Department of Telecommunications (DoT).

“We are working to see how 21Ghz right up to the V band can be better used.The V band is obviously the special spectrum as it has great scope because of it capacity for backhaul, ability to aggregate wifi hotspots and its low interference property due to oxygen absorption,” said Deepak at Broadband India Forum’s (BIFs) International Summit ‘Accelerating Broadband in India: Complementing Fiber Optics with Wireless Fiber.

“The Telecom Regulatory Authority of India (TRAI) recommendation makes use of these frequencies and broadly talks about the mix of licencing including light touch regulations and delicensing,” he added.

These bands can not only be utilized for mobile backhaul but also act as a “fiber extension” to extend broadband connectivity from existing points of presence (“POPs”) to nearby locations for a number of applications in urban, semi-urban, and rural areas.

V band ( i.e. 60 GHz) is considered suitable for providing short haul wireless links for backhaul in urban and dense urban areas as well as for providing Wifi like multigigabit wireless access everywhere. TRAI has proposed this as one of the potential bands for use for Wifi purposes. It could thus help overcome the congestion in the existing Wifi bands, thereby becoming a powerful enabler in proliferation of Broadband and help provide a big boost to Govt of India’s two flagship projects viz. Digital India & Smart Cities.

The Summit deliberated on the deployment of Wireless Fiber technologies in the E & V band to expedite penetration of affordable Broadband in India, especially in urban, dense urban areas and also in the remote areas where it either not feasible or possible to extend optical fibre to reach the end customer’s premises.

Welcoming delegates to the Summit, M.F. Farooqui, Chairman – BIF, said, “Broadband can be truly enabled by deploying fiber everywhere but that is not feasible due to costs involved and deployment challenges. E & V bands can provide tremendous acceleration to Digital India as they provide fiber like speed and capacity at competitive costs besides excellent customer experience”

The Summit deliberations also covered policy and regulatory issues to drive deployment of new innovative technologies in the E & V bands in support of national socio-economic programs such as Digital India, Make in India and Broadband for all. In particular focus was the impact of possible delicensing of the V band on the overall social and economic development and in meetings the goals of the accelerated march of broadband across the country.

I​t is a given that to make broadband reach everywhere to all the 1.3Bn citizens of this country, the availability of the broadband infrastructure is a must which can truly happen when we can make optical fiber reach everywhere. Since, it is not possible to do so everywhere, therefore the necessity of having wireless technologies that can extend the benefits of fiber to those places where fiber cannot reach assumes a lot of importance.

It is a fact that India lags way behind the world average in terms of number of hotpsots for every 150 people. While that happens to be the Global average with a cummulative presence of 45 Mn hotspots , India lags way behind with a total of only 31,518 hotspots till date. To be able to reach today’s global average of 1 hotspot for every 150 persons, India would need additionally another 8 Mn hotspots. ( TRAI Report dated August’2016 )

Amitabh Kant, CEO-Niti Aayog said “Broadband penetration is extremely important for the success of not just digital India but for all the initiatives of this government like make in India, smart cities and all of them are critically dependent on broadband penetration. At present broadband has reached nearly 10% of the entire population. India has a long way to go and it has to catch up really fast. We need vast number of innovations; one of them is the usage of V band and E band providing high capacity data where optical fiber hasn’t reached”.

Some of the emerging 60 GHz band technologies can now offer one or two orders of magnitude cost reduction over fiber and existing milli-metric band backbone networks.

802.11ad based 60 GHz band hosts a broad range of services including outdoor wireless links that extend the reach of fiber networks and personal networking technologies that deliver multi-gigabit speeds between devices.

Standardization often leads to widespread adoption, and this has been true for 802.11ad. Since the release of the 802.11ad standard, there has been participation by not only large, established communications semiconductor manufacturers but also wireless semiconductor startups.

Accordingly, there is tremendous opportunity for mass market semiconductors and device manufacturing besides attracting global majors as well as enterprising startups in this space to bring in much needed foreign direct investments. As domestic funds are limited, the challenge lies in encouraging FDI inflows into new innovations such as these which will accelerate the pace of broadband, since these can help fulfil the Government’s national objectives of Digital India, Make in India and Broadband for All.

Elaborating on the issues, Mr T.V. Ramachandran, President – BIF, pointed out that ” in today’s age and times, one of the greatest evils and worst enemies happens to be poverty of bandwidth and broadband. E & V bands ( Wireless Fiber ) can help mitigate this. ”

The Summit speakers stressed upon how India’s Optical Fiber Network could be healthily complimented with the help of such innovative and standardised technologies which help drive global economies of scale in terms of costs and how global harmonisation of spectrum bands viz. delicensing of V bands can help proliferate and democratise the use of the band for accelerating the availability of Broadband everywhere. Innovation, long-term commitment of public projects, liberalised policies that attract more local private players and foreign companies were important measures to curb costs and ensure affordability besides giving a boost to accessibility and availability of broadband.

A delicensed framework would bring India broader economic and socialbenefits that would further the government’s Digital India goals. Globally, the availability of delicensed spectrum has driven substantial economic benefit. This economic benefit is real and substantial. The World Bank estimates a 1.38 percentage point increase in Gross Domestic Product for every 10 percentage point increase of broadband penetration. In the United States alone, researchers have estimated that delicensed spectrum bands generated a total economic surplus of $222B in 2013, and contributed $6.7B to GDP. By 2017, the same researchers have conservatively estimated that in the United States, delicensed bands will drive at least $547.2B in economic surplus annually, and contribute at least $49.7B to GDP.

Broadband India Forum is a not-for-profit body, a think tank of knowledge leaders from different sections of the industry, government and civil society . BIF’s vision is to be a thought leader as well as a credible and effective voice of the Indian broadband industry to help propel the nation in achieving the ambitious vision of our Hon’ble PM by transforming our country through Digital India. To achieve this, BIF is working to facilitate expeditious advancement of affordable and high-speed broadband throughout the country on a technology & service -neutral basis via development of the entire broadband ecosystem on a holistic and inclusive basis

The delegates to the summit also deliberated on the surge of the data usage and the consequent impact it has on the legacy networks and the consequent impact it has on the network infrastructure and how the promotion of E & Vband including delicensing of the V band can help alleviate the data backhaul issues coupled with opening of new avenues for proliferation of Wifi like access everywhere. Summit attendees included senior members from the Government, such as DoT, TRAI, Niti Aayog, MeitY, CDOT, BSNL, BBNL as well as representatives from Telecom Service Providers, Internet Service Providers, Technology Providers, Microwave Device & Semiconductor Manufacturers, Smart City Solution Providers, Educational & research organisations , User organisations ( Banks, Defence, etc ) and other allied industries

What must India do to offer a progressive Internet-as-an-essential-service in the coming 25 years?