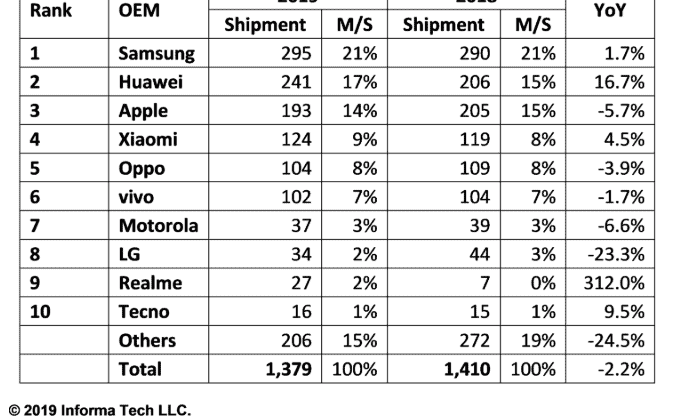 The worldwide smartphone market failed to sustain its growth momentum in the fourth quarter, causing shipments for the full year of 2019 to decline by 2.2 percent compared to 2018, according to preliminary research results from IHS Markit technology research, now a part of Informa Tech.

Shipments totaled 1.38 billion units in 2019, down from 1.41 billion in 2018. This decrease was slightly less than the 2.4 percent decline from 2017 to 2018, as reported by the IHS Markit | Technology Smartphone Intelligence Service – Premium.

“Despite achieving double-digit growth for the year, Huawei in the fourth quarter started to feel the impact of continued headwinds from US government trade actions,” said Jusy Hong, smartphone research and analysis director at IHS Markit | Technology. “After three quarters of significant growth in 2019, Huawei’s shipments declined by 7.4 percent year-over-year in the fourth quarter.”

Until the fourth quarter, Huawei had weathered the uncertainties of a US technology ban well, shipping almost 60 million units in the first quarter, followed by 59 million in the second quarter and 66.8 million in the third. While the US government has granted licenses to some US businesses to continue selling products to Huawei, Google is not one of them so far.

“Huawei now is launching its latest flagship smartphones internationally,” said Anna Ahrens, senior analyst at IHS Markit | Technology. “However, in markets like Western Europe, the lack of Google services will make Huawei phones a hard sell for consumers, especially considering that the company’s Mate series is positioned squarely in the premium price segment.”

Growth hard to come by in 2019
Aside from Samsung and Huawei, most of the other major smartphone OEMs ended the year with shipments down compared to 2018.

No.-4 ranked Xiaomi grew 4 percent year-over-year, with shipments rising to 124 million units in 2019, up from 118.7 million in 2018. India remains a critical market for Xiaomi, but the company is facing increasing competitive pressure in the country.

One of Xiaomi’s key competitors in India currently is ninth-ranked Realme. The Realme brand first entered the market in the second quarter of 2018 and was spun out of OPPO in the third quarter of 2019 to focus on the Indian market.

Global shipments of Realme smartphones expanded 275 percent year-over-year, rising to 7.3 million units in the fourth quarter of 2019, up from 1.9 million units during the same period in 2018.

While Realme burst onto the scene as a standalone entity brand in the third quarter of 2019 by shipping more than 10 million units, the company was not able to sustain this aggressive growth in the fourth quarter.

“Huawei’s position in the Africa market has been weakened by trade friction, affording a growth opportunity to competitor Transsion,” Schneemann said.

Lastly, Tecno grew 13% year-over-year in the fourth quarter, to 4.3 million units, up from 3.8 million units—rounding out the top 10 smartphone OEMs.

A late surge by Apple
Apple regained its footing in the fourth quarter of 2019, following a couple years of decline. The new iPhone 11 series appears to be resonating with the consumer base. Further growth in the company’s wearables and services segments points to additional new users potentially joining the Apple ecosystem.

Looking ahead
At the beginning of 2020, 5G smartphones are a key trend. While shipments are not large enough to significantly boost the market, the new network technology will bring excitement to a growing number of market segments, presenting more choices to buyers. Major chipset vendors have already announced their reduced-cost 5G system-on-chip devices, allowing the industry to start to make a dent in the high pricing for 5G smartphones.

The tensions between the U.S. government and Huawei will continue to linger and will have an impact on the company and the overall market.

The outbreak of the coronavirus in China is set to affect the smartphone market, with Apple announcing that this challenge is likely going to impact its business. Other OEMs will be faced with similar supply chain challenges as well.