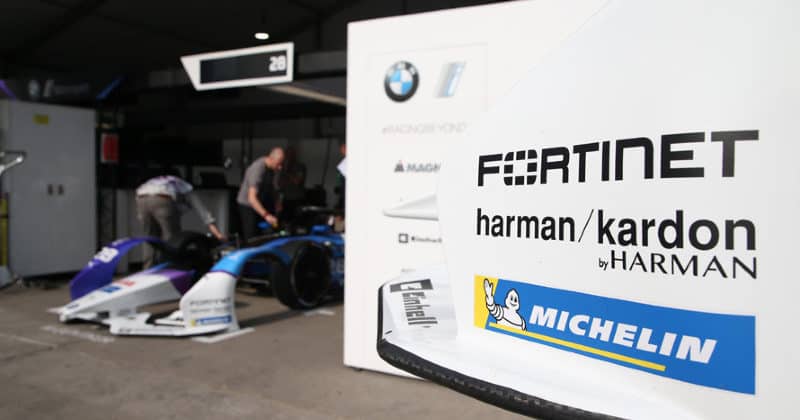 Fortinet has joined BMW I Andretti Motorsports the official partner for their Formula E team as part of Fortinet’s commitment to accelerate innovation, high performance, and energy efficiency.

Like Formula E, Fortinet drives digital innovation through our breadth of offerings that make up the Fortinet Security Fabric.

Fortinet’s products powered by Fortinet SPUs are engineered with the same emphasis on acceleration, high performance, and energy efficiency. Given these synergies, Fortinet has partnered with the BMW I Andretti Motorsport team, marking the most significant engagement with a motorsports team in the company’s history.

Similar to the Formula E series, Fortinet continues to digitally innovate and set industry records for performance and speed. Fortinet SPUs outpace what is available in the market with the highest Security Computer Ratings for the following benchmarks:

The Fortinet Family of SPUs is specially-designed security processors that provide unmatched performance at a fraction of the cost of traditional CPUs, providing accelerated network security, accelerated graphics rendering and accelerated AI in the cloud. Fortinet’s FortiGate Next-Generation Firewall appliances are powered by the following security processors:

Content Processor 9 (CP9): The CP9 protects applications while optimizing the user experience with the least performance degradation. The CP9 works as a CPU co-processor, taking on resource-intensive security functions such as SSL/TLS decryption – including TLS1.3 – IPS and antivirus.

System-on-a-Chip 4 (SoC4): Fortinet’s SoC4 is a purpose-built security processor that has achieved the highest Security Computer Ratings in the industry to support customers’ WAN Edge transformation.

Fortinet Introduces Over 350 New Features to its Security Fabric Platform

Fortinet announced the release of FortiOS 6.4, the latest version of its flagship operating system…

Organizations with multiple remote offices are exhibiting a new trend. They are switching from performance-inhibited…