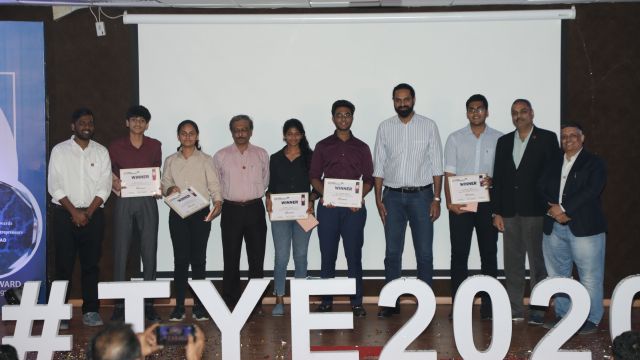 TiE (The Indus Entrepreneurs) Hyderabad Chapter is the active go-to network of 150+ successful Charter Members. Each year TiE Hyderabad impacts over 1100 startups and 6400+ students, conducts 131+ of events & activities under 20+ themes. And TiE Hyderabad runs two seasons of TYE program, one in Summer it starts in April and ends in June every month. The current season started in October 2019 and close to 40 students underwent a rigorous curriculum on entrepreneurship and learned business concepts through several classroom sessions over the weekend workshops and few weeks of mentoring by successful entrepreneurs, the Charter Members of TiE Hyderabad.

In line with this, TiE Hyderabad had announced the winners of the 10th edition of TiE Young Entrepreneurs (TYE) challenge held for 3 categories, B-Plan, 1 Minute Elevator Pitch and Maker Faire Prototype. The finale was held at the auditorium of Dr. B R Ambedkar Open University in the city of Hyderabad last week.

In the TYE challenge, 36 students from 23 schools formed 7 teams and pitched their ideas under the B-Plan, 1 Minute Elevator Pitch and Maker Faire Prototype competition.

The top prize winner in the B-Plan category was Findr, a LinkedIn-like solution for blue-collar jobs including the provision of maids, cleaners, drivers for customers and the runner up team was Flobal, a business idea where flower-flavored ice creams are made of organic ingredients had bagged the runner-up position.

In the Maker Faire category for best prototypes, RewardBox, a mobile application that unifies all the loyalty points a customer earns through his purchases at several stores across the country and alerts the user of their expiry, emerged as the winner.

It was a close contest in 1-minute elevator pitch as 2 teams Comfee and PuriFloat were declared joint winners held using an online voting method.

Comfee is a power conservation solution regulated by an IoT device that controls the speed of fans and air conditioners based through measurement of ambient temperature in the room, while PuriFloat, is an automated device that helps clean lakes using an Electric motor run boat/conveyor were declared joint winners.

The winners had faced a stiff challenge, as there were a series of interesting pitches, such as Enviros Amigos, a device that could recycle plastic waste into oil through a chemical procedure called pyrolysis, Idenico, an affordably priced paper strip to test for adulteration, contamination or chemical presence in milk.

Congratulating the winners, and their scalable business models President of the TiE Hyderabad Chapter, Sridhar Pinnapureddy, (CEO of CtrlS Datacenters and Cloud4C Services) said, “It took me a couple of failed ventures to actualise my dream of becoming an entrepreneur. The business ideas of these young minds are nothing short of billion-dollar proposals with the potential to emerge as mega enterprises. It is for them to now leverage on the networks such as TiE to reach their pinnacle. These children are the future of our entrepreneur ecosystem and it is heartening these children have the backing of their family to pursue entrepreneurial dreams.”

“We were genuinely surprised by the professionalism of the teams and the relevance of the ideas. They surpassed our expectations and reaffirms our faith in our young generation potential to create a promising future” the jury members had expressed.

Winners – Findr was declared the Winner of the B-Plan round in the grand finale of the 10th edition of TYE 2019-20. Team Findr members were :

Runners up – Flobal declared the runners-up of the B-Plan round in the grand finale of the 10th edition of TYE 2019-20.

Although a no-brainer fact, India evidentially reflects as a country with burgeoning data consumption. Nokia’s annual…

In its latest industry data revelation, Viavi Solutions has found a rapid surge in the…