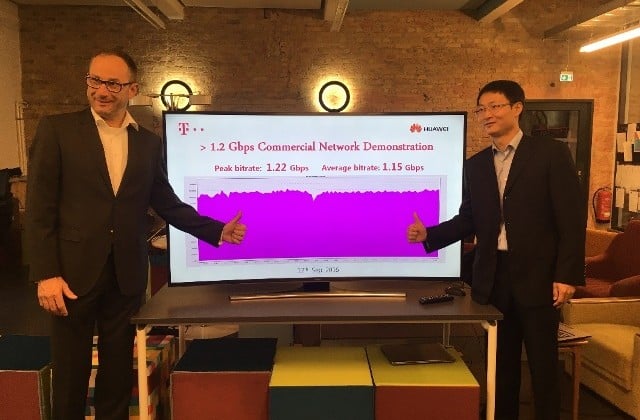 “Deutsche Telekom and Huawei used the latest evolutionary step of this technology – LTE Advanced Pro (4.5G) – with a conventional mobile base station, which was bundled with a small cell solution; the data traffic flowed over five carrier frequencies instead of just one,” the statement said.

“This required one thing above all from both the transmitter station and the receiving devices: they have to support 4×4 MIMO (multiple input – multiple output) technology. If all these components are used, individual users can enjoy peak speeds of more than 1 Gbps. Wireless capacities in the equipped cells are also improved greatly for all users,” it said.

The current move by Deutsche Telekom and Huawei represents the next step in a long-term innovation collaboration in the development of mobile communications technologies and the roll-out of Germany’s fastest LTE network. In an earlier test last year, the two companies bundled three carrier frequencies in Berlin, reaching speeds of over 340 Megabits per second. They have now surpassed this record, and have taken an enormous step towards creating a gigabit society.

In 2010, Deutsche Telekom began paving the way towards a gigabit society. Since then, fixed-network customers in particular have increasingly benefited from fast connection speeds. Together with Huawei, Deutsche Telekom has now achieved a breakthrough in Berlin for its mobile customers as well.

“User behavior is evolving rapidly on the way to a gigabit society. That’s why fast Internet access can’t be limited to just fixed lines and fiber optics – our customers also want the highest possible speeds for maximum comfort on the go as well. As you can see, our network delivers. We are ahead of our time and ahead of the competition,” said Claudia Nemat, a Deutsche Telekom AG Board Member for Europe and Technology.

Lin Baifeng, President, Huawei Deutsche Telekom Key Account, said, “Huawei strongly believes in the best user experience as the foundation for the successful future of Deutsche Telekom. Together we innovate for the advanced wireless technology and Huawei is happy to support Deutsche Telekom to prove the benefits of the latest evolutionary step of this technology, LTE Advanced Pro (4.5G), in real field application.”

HUAWEI AppGallery– the official app distribution platform of Huawei, providing a new alternative to its…