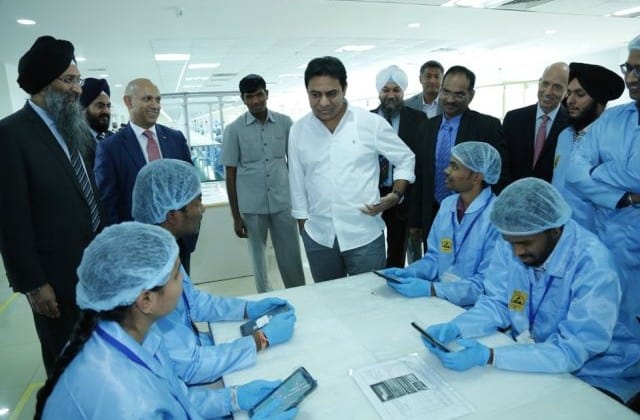 NEW DELHI: Giving a boost to the Make in India initiative, Minister of IT and Industry of Telangana K T Rama Rao and Nadir Patel, High Commissioner of Canada, formally inaugurated India’s top selling tablet manufacturer DataWind’s Hyderabad facility. It has to be recalled that earlier this year DataWind had signed a MoU with the Telangana government when Premier of Ontario, Kathleen Wynne visited Hyderabad to setup its second facility in India. Keeping its promise the company today launched its second manufacturing facility at GMR Complex at Rajiv Gandhi International Airport in Hyderabad.

While inaugurating the facility K T Rama Rao, Minister of IT and Industry, Telangana said, “I congratulate Suneet Singh Tuli for setting up this state of the art technology facility in Hyderabad and welcome him and team DataWind to the state of Telangana. They are the leaders in delivering Internet access to emerging markets. The Govt of Telangana will provide full support to them to ensure that their operations are streamlined and successful. The Investment made by DataWind will not only contribute to the revenue of the state but will also be instrumental in generating jobs.”

DataWind has committed an investment of Rs. 100 crores to establish its Hyderabad facility, which will manufacture 2 million units in the first year, whereas at full capacity it can reach up to 5 million units. The company will generate employment of around 1000 employees of which the Company has already hired 500 employees.

Speaking at the occasion, Nadir Patel, High Commissioner of Canada said, “Canada strongly values its relationship with India, including our growing trade and investment relationship in the information and communication technology space. DataWind’s launch of another state of the art facility is a prime example of the collaborative spirit between Canada and India for the benefit of our societies and of economies. DataWind’s is a prime example of Canadian companies investing in India for its betterment, and reflects the best of Canadian values. We look forward to continue strengthening our partnership going forward as India strives to achieve its Make in India objectives.”

Commenting about the facility, Suneet Singh Tuli said, “The entire team of DataWind are honored by the presence of Honourable Minister of IT and Industry, Telangana, Mr. K.T. Rama Raoand his Excellency Nadir Patel, High Commissioner of Canada who have taken out their time to inaugurate our Hyderabad facility. By producing state-of-the-art and most affordable devices in India, we not only wish to supply products that would make Indians proud, but boost ‘Skills India’ by generating highly skilled employment locally.”

The company has an assembly unit in Amritsar and had in 2013 set-up India’s first and only manufacturing facility for touch panels. DataWind’s first unit in Amritsar manufactures more than one lakh units per month, and almost 20 Lakh to date.

E-commerce giant, Amazon’s long-term commitment to India was evidenced by the setting up a campus…

UST Global has expanded its India operations by opening a global delivery center at Hyderabad,…