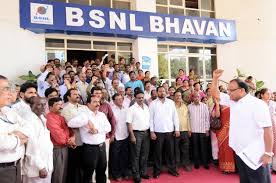 NEW DELHI: The employees of struggling PSU telco BSNL went on a nation-wide two-day strike from today in order to protest against government’s inability to revive the company.

“BSNL has been running in losses to meet government’s commitment. In year 2000, BSNL had cash of about Rs 40,000 crore but all the money has been taken by government in form of interest and spectrum price. Revival of BSNL is must for interest of consumers,” Forum of BSNL Unions and Associations, which represents over two lakh employees, Convener VAN Namboodiri told a news agency.

“Technology has improved a lot so there will not be much impact on service except in few cases,” he added.

He also said that the Telecom Minister has not met the union despite its constant request. However, DoT Secretary Rakesh Garg is likely to meet the union on April 25.

“It is already five months since the Forum issued the strike notice. However, the DoT did not get time all these five months to hold talks with the Forum. Now, the DoT has invited the Forum for talks on 25th April. Despite this invitation, the Forum, in its meeting held today morning, decided to go ahead with the strike call,” Namboodiri said.

“Government made promises but did not keep it. It gave BSNL notional loan of Rs 7,500 crore in year 2000 and took back Rs 12,500 crore at interest rate of 14.5 per cent. In 2010 spectrum auction, all private operators were given choice to bid in circles of their choice but BSNL was not given any choice,” Namboodiri added.

“An amount of Rs 1,250 crore, allotted to BSNL in lieu of access deficit charges for providing loss making connections for 2012-13, is still pending payment. We are losing about Rs 10,000 a year on rural landline connection just to meet government’s commitment. If government bears the cost, BSNL will turn profitable,” he said.

Meanwhile, BSNL’s new CMD Anupam Shrivastava has exuded confidence that the company would see profit from 2018 and things are likely to change from next year onwards.