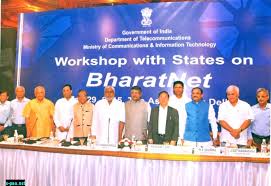 NEW DELHI: The much-talked about BharatNet or NOFN project that promises to provide internet to every nook-and corner of the country is not getting any support from the private operators, according to government sources.

Under the BharatNet project, (Bharat Broadband Network Ltd) BBNL is laying incremental optical fiber cable between the block and GPs. That means cable at almost three km per (gram panchayat) GP will be leveraging the existing fiber of three PSUs—BSNL, Railtel, and PGCIL and the core network.

Each of the GPs is connected to the block Point of Presence (PoP) in a point, which the government believes not only minimizes the cost but the target of reaching GPs is also achieved in the least possible time.

The network is utilizing gigabit-capable passive optical networks (GPON) technology to provide layer-2 connectivity between the two end points, and here the private players or the service providers can play a role by building their own access network to cater to the needs of their customers.

However, if government sources are to be believed, private telcos are hesitant to invest in such a project and are not cooperating with the government in the absence of a commercially viable model.

Repeated attempts from Voice&Data to seek inputs from private TSPs failed and this shows their lack of interest in the current state of affairs; and no response from Minister, Telecom Secy shows their lack of confidence in meeting the BharatNet objectives within the deadline.

Rajan Mathews, Director General, COAI, the GSM lobby group, says: “The BharatNet project also does not include service offering as it is focused on laying of optic fibers only. For end-to-end services, telcos will have to set up their own infrastructure at the gram panchayat level.”

“Until and unless a strong business case is built including designing of the services, provisioning of these services to the customers, hosting and tariff options, affordable smartphones, affordable data plans, etc, there will be no takers for this connectivity at the block level,” he adds.

At the same time, experts say that a government-style model will not help the project take off and involvement of wide range of potential stakeholders in the ecosystem is the need of the hour.

Rajesh Charia, President, Internet Service Providers Association of India (Ispai), says: “Dependability on government organizations will not make it a successful project…they have to work in a corporate style to achieve the target, taking into fold the private players, ISPs etc.”

However, the recommendation panel on BharatNet suggested the involvement of different players into the project.
Som Mittal, former Nasscom President, who was also the member of the committee formed on BharatNet, says: ‘In addition to the three PSUs, we need private players (like infrastructure companies) and we should also give the responsibility to procure the cable, fiber, electronics to a different agency and start outsourcing.

Some infrastructure companies have already evinced interest in the project and at the same time, private telcos, multi-service operators (MSOs), cable operators have a larger role to play here.”
Once fiber is laid, it would be leased out to them so that all of them become part of the ecosystem. The business model can also be considerably strengthened through various possible government initiatives to create the demand-pull.

“There is a dire need for several policy directives with respect to tower installations, Right of Way,etc., to inject viability into the business plans,” adds TV Ramachandran, Chairman, Assocham Telecom Council.

Posted by: Krishna Mukherjee
View more posts
Tags:BharatNet, NOFN
Why are private players not enthusiastic about BharatNet? 0 out of 5 based on 0 ratings. 0 user reviews.
Net Neutrality: August 15 last day for submitting report
The alternative routes to Digital India