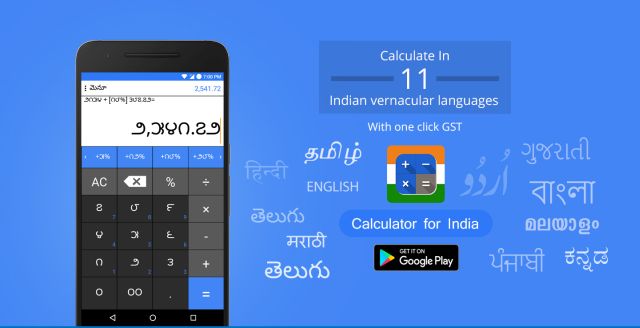 BENGALURU: Young Turks turned entrepreneurs, Sreeraman Thiagarajan, Rushabh Vasa, and Uppal Shah are the brains behind Agrahyah Technologies (AT). They are developing AT as software technology startup to build a suite of apps, products, and content ground-up for the millions of Indians who are non-English literates.

With an aim to make technology useful for everyone and remove English as a barrier for getting full advantages of the internet, Agrahyah Technologies has launched a Calculator that is available in 11 Indian vernacular languages including, Hindi, English, Tamil, Kannada, Marathi, Urdu, Bengali, Gujarati, Malayalam, Punjabi, and Telugu.

Six months since inception, AT is working to build apps and content in Indian vernacular languages which cater to the masses in a culturally and a contextually relevant way. Technology giants and government are working to get more people online by increasing connectivity, but it raises an acute challenge in terms of inclusion. Of the approximately 400 million plus Indian users online, only 175 million users are comfortable with English.

The founders opine that the World Wide Web is dominated by English. India has over 400 million Hindi literates but WWW has less than 0.5% of Hindi content online. These stark differences will grow further if the language divide is not addressed adequately and urgently. There is a huge gap in the availability of high quality apps and content in vernacular languages. This is where the founders believe that its company plays a role in bridging quality apps and content for users in vernacular languages.

Our philosophy at AT is to be culturally and contextually relevant for each language. For instance, AT has developed ‘Calculator For India’ a free Android app that works in 11 Indian languages and also has GST calculation feature.

This is the first step to build multi-vernacular web for the growing number of Android users in India. AT is also launching HotFridayTalks.com later this month, which is a Lifestyle and Entertainment portal that aims to be a tech lead, mobile first, new age hangout for youth. The vision is to develop a lifestyle portal with content written in each of the vernacular languages rather than merely translate it.

Another application by AT is in works and is called MyNews. An Android app to keep track of people, places, and things we care about in a language of our choice. For example the app lets you set a tracker for ‘Mysuru’ in Kannada or ‘Narendra Modi’ in Bengali. Once set, all the relevant news will be smartly delivered to the user and they can even choose to read it without ads and save it offline.

Can you believe this! In 2019, consumers may expect smart speakers to take part in…

91% of Gen Z-ers consider technology as a factor while choosing jobs: Dell study