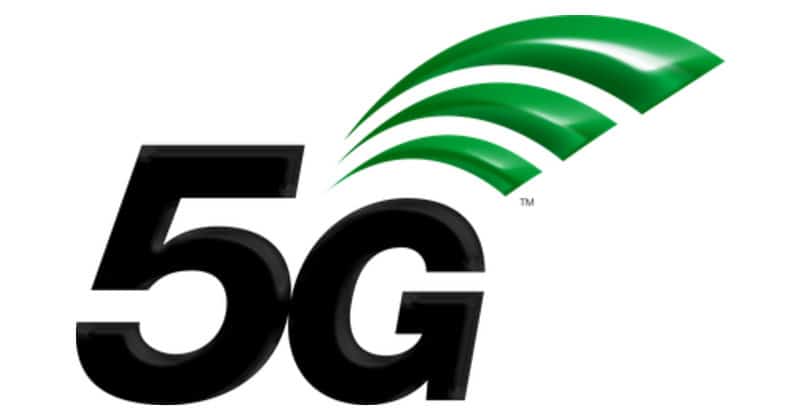 The story of 5G is a long and convoluted one. Initiated in 2008 as an experiment, as it now is fast becoming the norm for some of the more developed nations. This is a post that I have been meaning to do for a while. Firstly, we start in the present. Next, there will be a trip down the proverbial memory lane as we discuss the origins of the new network. Thirdly, a brief look in the foreseeable future. Finally, we look at what will come after.

The first commercial next generation network was launched in 2019 when South Korea became the first company to use the network. Fast forward to 2021 and a total 38 countries have commercial 5G Networks.  It is becoming the norm at a fast pace and in India too, telecos are neck in neck to become the first.

In terms of performance, the new generation brings up to a 100 times the speed as compared to its predecessor. The speed can vary from 50 Mbps to a whopping 1.8 Gbps, achieved by AT&T via mmWave. That kind of data speed is mind-bogglingly fast as it could potentially allow you to steam ultra high-quality content in all its ultra high glory. If we take the average speed of 5G in US, that is, ~50-60 Mbps, it will allow for a full sized movie to download within minutes, even seconds. Maddeningly fast.

Milimeter Waves, or mmWave is a type of telecom frequency who’s wavelength is from 300 mm to 1 mm. These mmWaves have a frequency of 1 GHz to 300 GHz. This will become relevant later.

In terms of bandwidth, there are 3 types of 5G bands.

These networks, creatively named, also reflect the speed of the network. For instance, a low-band 5G will only be slightly faster than the fastest 4G while the mmWave has achieved speeds in excess of 1 Gbps.

There is a low bandwidth 5G called 5G NR (New Radio). It is a new Radio Access Technology, also known as RAT which will depend on existing LTE technology while the standardization for 5G goes on. As soon as NR “matures” within the broader 3GPP 5G ecosystem, the NR will be overtaken by standalone systems.

Here is a quick rule of thumb – the smaller the wavelength, the faster the internet speeds. The added speed comes at a cost of range, however. Simply put, the energy in a system remains constant. In a telecom wave, the energy is directly proportional to the frequency. The relationship is dictated by the beautiful equation below:

Here, c is the speed of light, v  (nu) is the frequency of the wave and λ (lambda) is the wavelength of the wave.

If you increase frequency, the wave will lose the energy sooner and it won’t be able to travel far. That is why 5G will require geographical cells – small regions for better interconnectivity and speeds. For instance, the NR version of the next-gen will have a range of several hundred kilometers while the fastest mmWave will have a range of only a few tens to hundreds of meters.

Within these two frequency bands, there are sub-carrier spacing, which are:

The throughput of FR1 is similar to that of LTE because the latter is already at a mathematical limit for data channels known as Shannon Limit. You can look it up on Wikipedia for a glorious mathematical solution of the same.

In a study published by Tafique et al in 2017, they envisioned 5G geographical cells to look something like this: 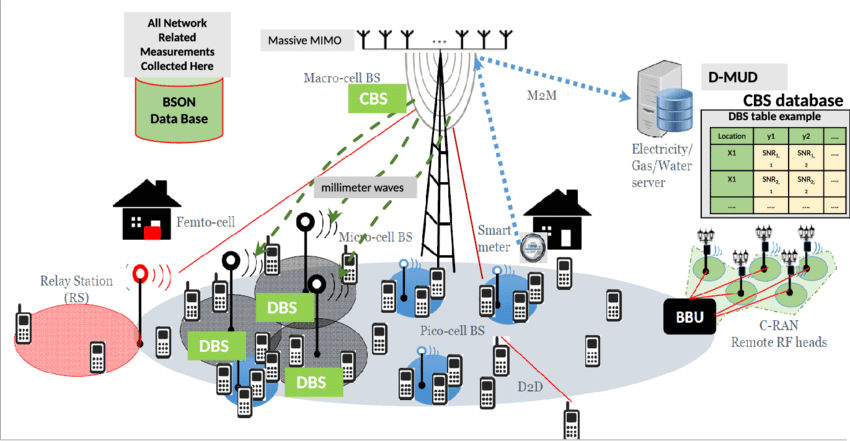 These cells will be “multi-layered” with multiple RATs and be capable of supporting IoT and device-to-device communications on a scale unheard of before. That is why the researchers called for a “paradigm shift in the way cells are designed”.

Since there are so many different types of connections going on due to 5G being faster and more reliable than its predecessors, the capacity of the existing and new infrastructure has to be much larger than before. That is why it is being considered to use a 5G tower “array” rather than a single tower.  This would serve two purposes, it will redistribute the load within a single cell better and reduce latency and error.

All the Wild Theories About 5G

The introduction of anything new to humans is always met with apprehension from some parts of the society. From the first time a vaccine was introduced back in the late 19th Century to the first computers, any new paradigm shift is rife with controversy and opposition. None more so than 5G, which had the bad luck to be gaining momentum in tandem with a global pandemic.

Now, it really is an incredible leap to be putting those two together but that is what has happened. Incredible, really.

It got so bad that there were arson attacks on 5G masts and tower arrays in over 8 different countries, causing millions of dollars worth of damages. The amount of craziness was such that WHO had to get involved as they released this infographic. 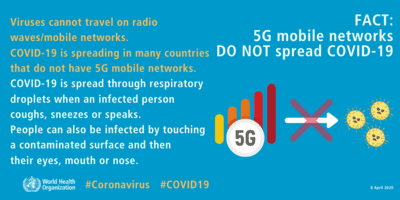 This is a rather exasperating example of what fake news does to people’s minds.

There are actual health concerns regarding 5G and those are related to the radiation from the towers. First, we need to address the amount of radiation that is already around us. On an average, a person is exposed to 3.01 miliseiverts per year of background ionizing radiation. To put that in perspective, a CT scan will expose your body to about 1-20 miliseiverts in one go.

I laid specific emphasis on the term ionizing because ionizing radiation is the type which can actually cause you harm. Here is a typical electromagnetic spectrum (the 5G waves are electromagnetic waves as well). 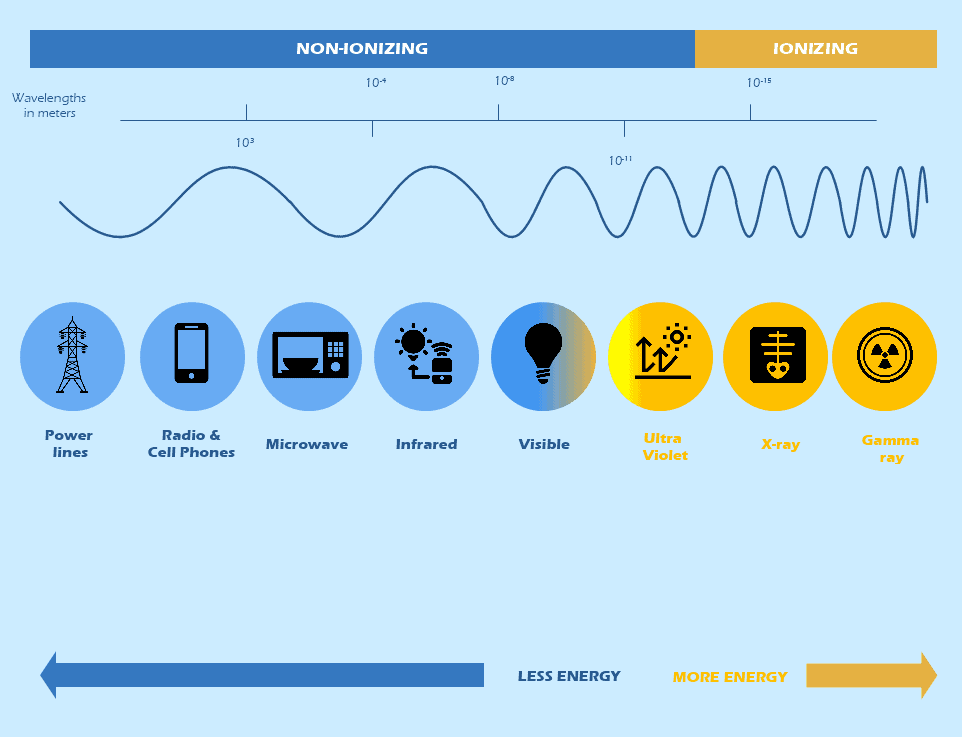 The higher the wavelength, the lesser is the frequency and consequently, the higher the energy. Only the ionizing radiation is capable of any sort of significant harm to the humans. Since 5G is firmly within the non-ionizing zone, there is no way it could be harmful to anyone. But, is 5G safe in a cybersecurity sense?

This brings us to a point which is not in the purview of the telecommunications part of 5G, so I shall be terse. To summarize, there are concerns regarding the vastly superior volumes of data which will be made available via 5G. With faster internet will come larger cyber attacks, as the speed will allow for the surface area of the attack to be significantly larger than anything up to this point in time. 5G is relatively less tested in that regard and it might cause harm in the sense that these days there are state-sponsored cyber attacks all over the globe.

IoT Analytics note that there will be an exponential increase in the total IoT devices all over the world due to the growth in reliability and usefulness of the same. In 2018 the number was 7 billion – in 2025 it will be well over 21 billion. This will be another channel for hackers to attack through, which would increase the scale and surface area of the attacks vastly. It remains to be seen that whether the current encryption technologies will be able to keep up with the breakneck speed of 5G.

There were also suspicions of espionage from Huawei and other China-based telecom equipment manufacturers, resulting in the ban of the former in various countries all over the world. This was amplified by a report published by the European Commission and the European Agency for Cybersecurity which warned countries against using only one supplier for a teleco’s 5G network.

The International Telecommunication Union introduced the standards for 5G in 2015. The same are tabulated as follows:

The race is still wide open as telecos are vying to be the first in India to introduce the concept. While the tests have been conducted by the Big 3 telecos, it is still early days to say. Airtel has conducted tests and is preparing for a mega introduction in the country, while Reliance Jio is not far behind either. It remains delicately poised as to who will beat the others to the punch.

It is perhaps the most debatable of all the points regarding the new network. For what I have seen thus far, 5G will be capable enough to support the next big steps in consumer electronics and other aspects of the 21st Century life. Faster and more reliable connectivity will see more of the future-ready tech becoming commonplace and newer, improved versions of what we already consider cutting edge technology. This is what will become normal in the 2020s:

This is not a definitive list and is off the top of my head. But expect to see some drastic changes over the years to come with 5G.

The inventiveness of naming things in telecom extends to the generation after 5G, named 6G. Likely to be made available in the 2030s, 6G will have speeds unimaginable at the place we are in. A conservative estimate puts the speed at around 10 to 100 times faster than 5G, going to around 95 Gbps.

China has already launched a satellite on 6th November 2020 to test the Tetrahertz networking technology that 6G will be associated with. Several telecom component makers such as Samsung, Nokia, Ericsson, Huawei, LG and Apple have shown their interest in developing 6G and the work has already underway on an academic level.

Posted by: Hemant Kashyap
View more posts
Tags:5G
What is 5G – A Detailed View of the Next Generation of Mobile Connectivity 0 out of 5 based on 0 ratings. 0 user reviews.
Bharti Airtel Announces Pricing of $1.25bn Dual-Tranche Bond Offering
Self-Regulation of OCCPs is a responsible and mature step: BIF