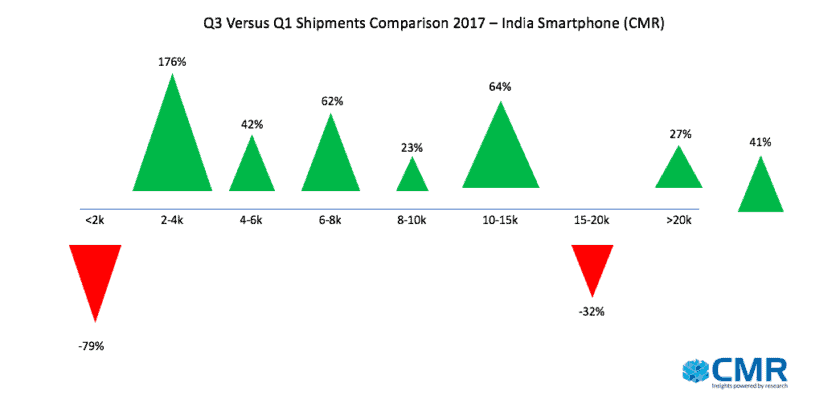 Not just a smart marketing, it is sensing the market pulse intelligently

The first time Smartphone experience is all what will matter in India now for a while. The bugle has already begun as ‘Desh-Ka-Smartphone’ and ‘Mera pehla Smartphone’ are already out in the market.

In a market like India, each and every market segment, including by price points, is a huge opportunity. So, whether a niche player likes to stay focused at a particular segment or the leaders present in all major segments; both are working strategies as per the goals to be achieved.

Xiaomi from day 1 had this messaging clear that they are here in India for leadership and whatever they did since, just reassured that they become leaders in a very short span.

The Jio entry has shaken the market on several fronts. While many of the things that have surfaced since are not liked by the incumbents, but the other way of looking at the things is that Jio has awaken the incumbents to break the status quo.

From devices point of view, the first time Smartphone user has become all important. This segment was always under and ill-served (in terms of quality of devices attempted to be supplied earlier as well). Jio came with its own interpretation of what a user wants at that level and launched what they call ‘India ka Smartphone’, which essentially is a FeaturePhone with 4G cellular connectivity and a couple of important apps, or to be precise, ‘workarounds’ to enable limited critical functions giving the user a small but significant taste of what Digital means. However, it has its own pros and cons.

The market was quick to react with the incumbents collaborating with some other Smartphone brands to launch very affordable Smartphones that have no capability limitations. However, how successful this ‘jugalbandi’ would prove, there are certain doubts. First and foremost, the issue is that two minuses don’t add up to a positive; it only doubles the trouble.

The brands with which the incumbents have paired with, are not strong at all presently. They don’t have the right kind of pull in the market and for them such partnerships are more than required. Similarly, for the incumbents, the issue would be to recover the costs not to talk of profits out of such bundling. It is very important to understand that the target group for such deals is predominantly prepaid and despite of eKYC, etc., it will be impossible for a large base of the target group to honour contracts to a level where the operator starts realising some profits from the partnership.

Eventually, operators shall have to bear the brunt of bleeding some more money in this game, which they can’t afford to. The incumbents have to forge paying partnerships and excite with something disruptive. The present partnerships are not going to give them exciting results.

Looking at the first nine months of 2017, comparing Q3 with Q1 shipments, the price segment of Rs 2-4k has seen the maximum growth at 176%. This is all Jio impact. The second-best segment to grow is Rs 10-15k which we all know is driven by replacements and upgrades. At the same time, decline of 79% in the less than 2k segment only indicates that consumers have understood of a threshold for some level of acceptable experience with Smartphones.

With 5A launch and 500 crores set aside to offer Rs 1,000 discount on it, Xiaomi has started to enter into one of the most happening segments to be, at least for few more quarters. Comparing Q3 with Q1 shipments, the segment registered a growth of 42%.

The launch of 5A can be seen a downward movement by Xiaomi to start showing presence in segments that are now becoming exciting and significant. However, as per the trend for this year so far, the sweet spot is Rs 2-4k, but Xiaomi may want to influence the market other way, which is, one cannot have a good Smartphone experience for less than Rs 4,000 Smartphone. That is of course the message they would want to carry as of now. Other way is launching a sequel to 5A which may be in Rs 2-4k bracket. One more option is to offer 50% discount on 5A from the allocated 500 crores as this budget may not easily get spent with the present scheme. Typically, Rs 4-6k segment sells 4.6-5 million Smartphones a quarter and Xiaomi expecting 5 million sales of 5A will take a longer period, at least 4-6 quarters, expecting it to gain 30-50% market share at this segment.

With Android Oreo Go also launched officially, we should see Xiaomi among the early brands to launch a Smartphone with this OS version giving the best of experience available to the users at these levels.

Xiaomi is not just a smart marketing brand but also senses the pulse intelligently. It was first aggressive about 6-8k segment pushed up to premium segment and has now started coupling the premium offerings with the entry level Smartphones. This strategic thinking is only going to make the brand strong in the Indian context and uniquely positioning an emerging brand having its users across all important price segments giving them a lot of real understanding and insights about the happening market of India.
The story so far has been interesting and has evolved as a must to know case study for people in the consumer technology domain.

Xiaomi has not only done things smartly but also shown the flexibility of scaling all functions as demanded the market synergising their growth trajectory. It has evolved and successfully emerged as one of the serious players on the turf not only encouraging new comers but also forcing the Tier 1 brands to rethink and re-emerge in one their strongest markets globally.

Xiaomi announced the second league of PatchWall Binge Award winners. Rolling out a number of…

In India, the lending industry is on an explosive trajectory. As per a recent report…