From a service that was meant for the elite, mobile telephony has evolved to become the lifeline of India, including those at the bottom of the pyramid

India is celebrating 25 years of the first mobile call that was made on this day – 31 July – in 1995. To say that a lot has changed in the 25 years since the first symbolic call was made by the then West Bengal Chief Minister Jyoti Basu to Union Communications Minister Sukh Ram, will be an understatement.

For the records: the first mobile telephone service was started on a non-commercial basis in Delhi on 15 August 1995. However, this was preceded by the National Telecom Policy 1994 (NTP 94) that led to the opening up of the telecom industry to the private sector in the country. It was also aimed at providing world-class quality telecom services and the development of telecom services, as well as increase accessibility of telecom services.

With over 1.16 billion telecom subscribers as of 30 April 2020 and teledensity of 86.66%, the country has come a long way. According to the latest TRAI data, the country has 1.14 billion wireless or mobile telephone subscribers, including 629.44 million urban and 520.08 million rural subscriptions. Besides, 97.2% of the total 676.14 million broadband subscribers come from the wireless segment.

Going back to the history, the opening of the telecom sector not only led to a huge investment by global telecom majors, the telecom-backed IT infrastructure further led to the birth of massive call centre, BPO, and KPO sectors, as well as new-age digital companies, including Jio Platforms that has recently raised over 1,52,056 crore from global investors, including Facebook, Google, Intel Capital, and Qualcomm, among others.

India’s mobile journey is also an interesting story of how the country skipped the entire analog first-generation (1G) wireless phone service of the 1980s, jumping straight to GSM and 2G digital telecommunication. 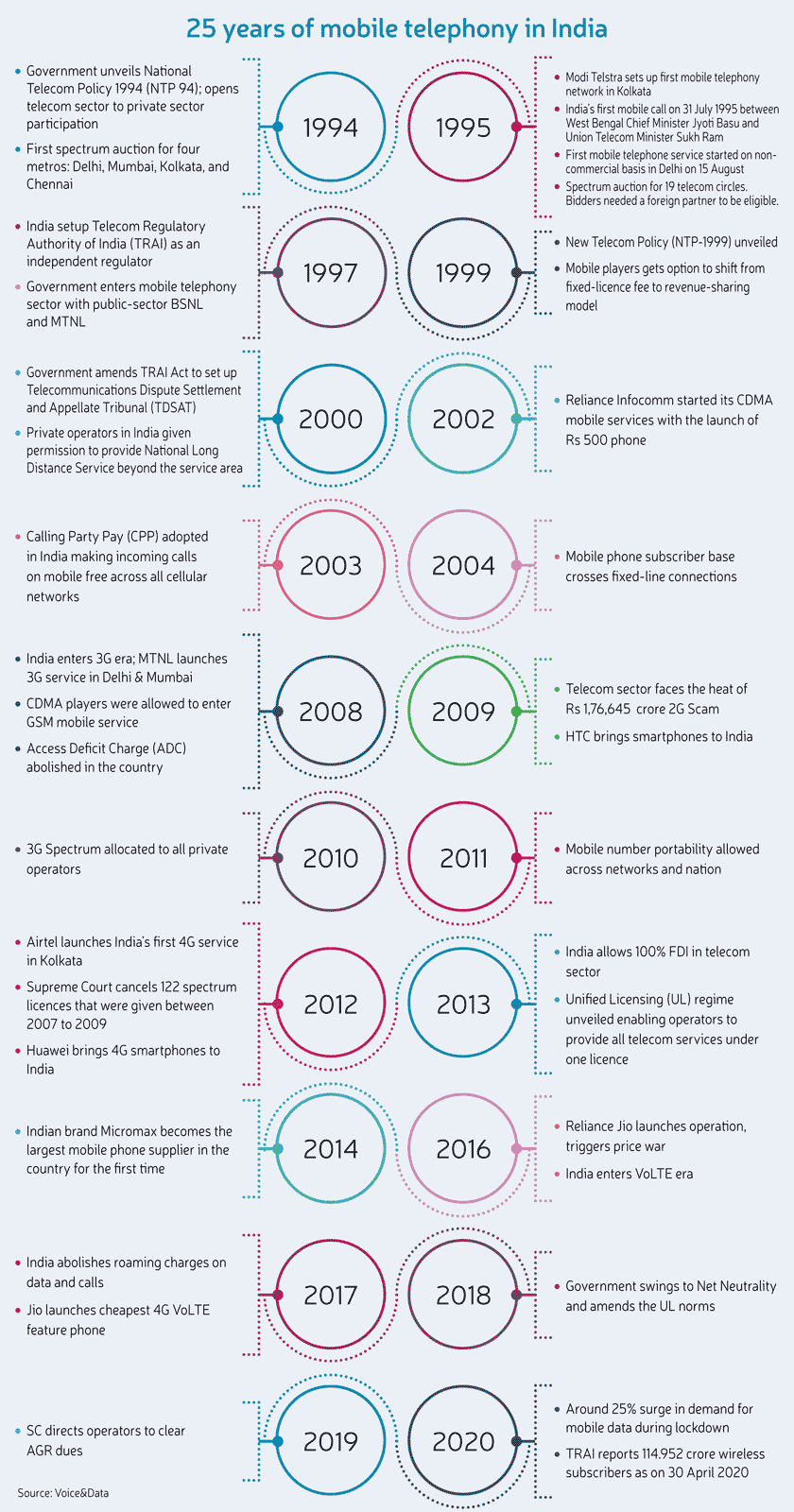 In an Economic Times article published in 2015, Umang Das, the then CEO of Modi Telstra had shared the interesting story of how it all started in mid-1994. According to him, Basu had invited B K Modi, who was then chairman of Modi Telstra (later Spice), and Das for a meeting at the Writers’ Building. During the meeting, Chief Minister Basu expressed that he would like Calcutta to become India’s first city with a mobile network.

Before the meeting ended, Modi had made his commitment to the launch date: 31 July 1995. Soon, his team from India landed up in Australia to discuss the plans of rolling out a mobile network in Calcutta with their JV partner Telstra.

Their hunt for know-how led them to Nokia, which had the cutting-edge technology but was initially apprehensive. However, Modi and his team soon worked out the modalities and the three companies were able to meet the promise in nine months.

Much water has flowed under the bridge since then; from the opening-up of the sector to over 122 licensees at one point of time, the industry went through major ups and downs – policy changes and few scams on the way – and also a major market disruption ushered in by RJio in 2016 that led to a wave of exits and consolidation.

However, the mobile revolution was not easy to come. Launched as a service for the elite at Rs 16.80 per minute for both outgoing and incoming calls, it took the country six years to cross the first five million subscriber mark. Intense competition followed and soon the mobile tariff started to drop. This led to the mobile telephony boom and the country crossed the 500 million mark in 2009 and touched the billion-mark in 2015.

While Modi Telstra, the country’s first mobile operator does not exist anymore, the private sector telecom service providers hold the sway in India’s mobile market – 89.28% of the wireless subscriber base, with BSNL and MTNL managing to hold just over 10.72%.

On the technology front, the country has upgraded to 4G and is readying for rolling out 5G services. Overall, the network technologies have evolved to a level unimaginable in the 1990s, with the entire nation effortlessly working from home during the recent lockdown and almost everything is now moving from owned-economy to the service-on-a-tap model.

Let us celebrate the call that changed India forever.