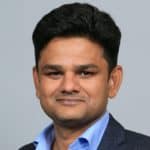 Mobile telephony in India has come a long way since the first mobile phone call made here on 31 July 1995. When mobile phones first launched here, both the handsets and calls were so costly that only a privileged few had access. Twenty-five years later, mobile telephony in India has evolved to a point where we have the least expensive mobile data plans in the world and a plethora of smartphone ranges to choose from. It is not uncommon for me to meet people who own two or three smartphones. Smartphone usage has therefore transformed our daily lives.

Unlike many other countries, smartphones were not only the first internet-connected device for most Indians, but first “screen” beside a television. Noticing the growing demand here, both Indian and international entertainment brands are creating new TV shows and movies for the Indian audience, intended for us to stream across mobile broadband here. Some even offer mobile-only subscription plans in recognition that mobile is the most broadly accessible form of internet access here.

Working from home at the scale India has done recently could not have been possible without the stride the telecommunications sector has made in the past 25 years. Telcos in India are providing not just the necessary connectivity to power the economic engine, but also supporting public health and education needs.

Behind the transformation of how Indians connect with the world is the evolution of our telecom sector. While all early mobile networks relied on microwaves, today fiber has been laid across thousands of kilometers in the country. Alongside this fiber build-out, it’s no secret that the industry went through a phase of an increasing number of service providers jumping at the chance to offer their services to India’s population, using high upfront network investment and low prices to the end-user to do so. In the past few years, the industry has consolidated down to a handful of service providers again, who are all battling for their place in the future of mobility in India.

Digital India’s opportunity
With all the progress India has made in the past 25 years, it is clear that even more opportunity lies ahead. You’ll notice almost 100% mobile penetration in the cities of India while rural areas still have less than half of that despite housing the bulk of India’s population. Digital India is the starting point for a nationwide conversation on the possibilities for bridging the digital divide in previously unimaginable ways, in a way that is digitally inclusive for more of India.

We’ve already seen the benefits of this in the banking sector. Traditionally, most of the rural population was out of reach of banking. However, with the Digital India initiative and mobile phones, the coverage and hence, the benefits have increased drastically. Transferring money to remote areas can be done within a few seconds, from wherever the banking customer is based.

We have seen similar changes in the farming sector. A lot of Indian farmers are on YouTube, sharing tips with each other. Also enabled by increased connectivity in India, we have a “Soil Health Card” that guides which crop a farmer should optimally aim for in which season and if their farmland is ready for their choices of crops. Once India implements 5G, we will have the opportunity to further address social inequality in farming. Farmers will be able to boost yields and crop quality by precisely monitoring soil and weather conditions using sensors to tailor the use of pesticides and fertilizers.

In the healthcare sector, with the use of tactile internet made possible by 5G, a physician could command a telerobot at the patient’s location, allowing remote physical examination with full audio-visual and haptic feedback. With 5G, surgeons could even carry out remote procedures using specialized robots.

Already popular with some gamers, virtual reality and augmented reality (AR/VR) headsets could also be used for education and training. For example, trainee engineers, mechanics, and even medics could learn how to perform specific tasks by following instructions relayed via AR or by using VR simulations. Similarly, these kinds of technologies could be used to teach biology and geography students about specific habitats and environments, either by superimposing digital information on images of the real world or by simulating the real world in virtual reality.

These are just some of the innovations that will be made possible by stronger networks. However, achieving this truly digital economy depends on improving the speed and reliability of the underlying networks that connect India.

Telecom’s inflection point
With this growth and the related digital economy, service providers are attempting to scale or adjust to these demands. However, many of their networks are full of legacy systems and protocols, meaning manual processes are often still required to set up, revise, and tear down even the simplest services. Many of India’s legacy networks are not designed to adapt to these growing and unpredictable enterprise and end-user demands.

Mobile telephony in India has evolved to a point where we have the least expensive data plans, and plethora of smartphone ranges to choose from.

Also to meet customer demands, service providers are building new products and services on top of their existing systems, mixing the old with the new infrastructure, software, and services. Networks are growing quickly and are becoming increasingly complicated. Managing this can easily overwhelm service providers and put them on the back foot, where they manage their networks reactively to the issues and have limited time to proactively improve their networks for future needs. India’s service providers need network architectures that are intelligent, flexible, automated, agile optimized, and programmable.

The adaptive network
By working with service providers, we understand the complexities facing them today. We believe in building each network to grow smarter, more agile, and responsive every day to match user expectations. We believe service providers can and must achieve a more adaptive network to prepare their networks for the torrent of data being unleashed across India from increasing numbers of consumer and IoT devices as well as enterprise cloud adoption.

It is with this need that Ciena brings the adaptive network vision to our customers. This adaptive network approach enables network operators and service providers to keep pace with growth in capacity, devices, and mobility with the right mixture of automation, intelligence, and scale.

The adaptive network is a target end-state and a set of architectural principles. Providers can start at different points depending on the current state of their network and their most pressing needs. As we enter the next 25 years of mobility in India, and all the lifestyle and economic innovations that come with it, we look forward to helping India leverage the adaptive network to unleash even more possibilities of digitization.

Posted by: VoicenData Bureau
View more posts
Tags:25 years of mobility, Ciena
Whither Indian networks? 0 out of 5 based on 0 ratings. 0 user reviews.
Prodapt names Arun Pai as EVP & Head of Americas Business
SD-WAN: Transforming enterprise network during the pandemic and beyond

Huawei is the Top Network Equipment Vendor for 2020

Dell’Oro Group, in their quarterly report, concluded that Huawei is the largest network equipment vendor…