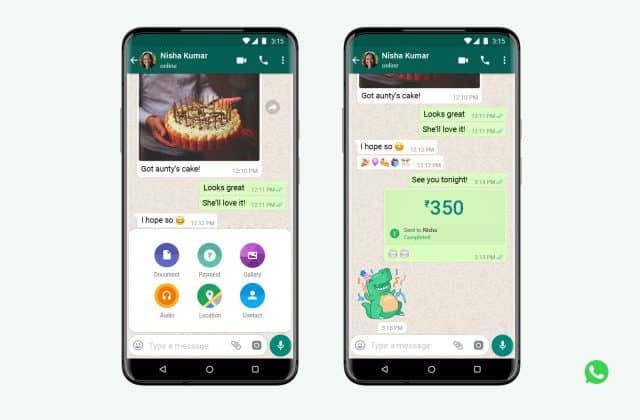 Four hundred million is the count of users of messenger App – WhatsApp in India. Spread across the length and breadth of the country in probably every household, the ubiquitous multi-participant communication channel WhatsApp is now allowing payments to be done on its platform, after two years of pilot study.

So, people across India will be able to send money through WhatsApp Pay. Claimed to be secure, WhatsApp says that the payments experience makes transferring money just as easy as sending a message. This eliminates cash exchange (which is much needed during this pandemic) and the need to visit a bank.

WhatsApp designed its payments feature in partnership with the National Payments Corporation of India (NPCI) using the Unified Payment Interface (UPI), an India-first, real-time payment system that enables transactions with over 160 supported banks.

To send money on WhatsApp in India, it’s necessary to have a bank account and debit card in India. WhatsApp sends instructions to banks, also known as payment service providers, that initiate the transfer of money via UPI between sender and receiver bank accounts.

Just like every feature in WhatsApp, payments are designed with a strong set of security and privacy principles, including entering a personal UPI PIN for each payment. And, Payments on WhatsApp is now available for people on the latest version of the iPhone and Android app, says WhatsApp.

Additionally, this feature will be available in WhatsApp already existing 10 regional languages, which will ensure widespread penetration even with digitally wary segments.

Facebook recently picked up a 9.9% stake in Reliance Industries’ digital arm Jio Platforms and WhatsApp has entered into a tie-up with Reliance’s e-commerce platform JioMart. The messaging platform helps users place an order, which is notified to the nearest listed grocery store and also has a customer support channel on WhatsApp.

This Diwali, apparel has been included in JioMart. Now the next escalation in service is to integrate JioMart into WhatsApp with WhatsApp Pay as a payment option. As

The much needed financial inclusion

Digital payments will undoubtedly have a better and bigger impact on attaining last-mile connectivity as the crux in India. In order to involve underserved areas and customers in financial inclusion, many developments are done in payment infrastructure and online payment models by NPCI. And, one of its efforts is the designing and launching of WhatsApp Pay.

As Mandar Agashe, Founder, MD & Vice Chairman, Sarvatra Technologies, rightly says WhatsApp, though, foraying into a crowded space of payment services with competition from the likes of Google Pay, PhonePay, Paytm, is sure to take digital payments to new heights. Smartphone usage is ubiquitous across the country taking into account the burgeoning digitally savvy cohort and the population’s familiarity with WhatsApp’s interface, and the flexibility and ease of usage, considering the fact that it is an additional feature on a pre-existing app is sure to expedite its adoption, and expand UPI’s network on a large scale.

WhatsApp in the long run believes that the combination of its payment option and UPI’s unique architecture can help local organizations address some of the key challenges of the time, including increasing rural participation in the digital economy and delivering financial services to those who have never had access before.

Commenting about this, Anand Kumar Bajaj, MD & CEO, PayNearby, says, “The rolling out of WhatsApp Pay will accelerate UPI adoption. Compared to global counterparts, India leads the pack when it comes to digital payments and enablement to bolster consumer choice and innovation will help boost financial inclusion. Today, we have 400 million active WhatsApp users, while less than 160 million avail mobile payments. Calibrated permission to WhatsApp is a good start to support the cause of financial inclusion, especially in tier 2 and 3 cities. A combination of WhatsApp Pay’s user-friendly interface and UPI’s interoperability will drive larger participation in cashless payments. PayNearby will continue to enable the last mile transition from assisted service to self-service and building blocks are in place towards this direction.”