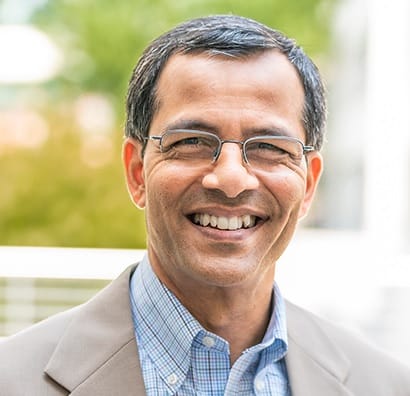 Voicendata: How are NFV and SDN the key enablers for 5G.

Shekar Ayyar: The definition of 5G derives from the next generation of wireless technology. 5G is a much bigger determinant of a lot more than just the next-generation wireless. It is actually bringing together wireline improvement, as well as wireless. It’s bringing together IT and telecom networks. A lot more use cases are deployable for enterprises as well as consumers using the next generation architecture for 5G.

What is going to make 5G successful? One of the key things about 5G is: how do you deploy agile, new services on top of the infrastructure, so that you can generate new revenue for carriers and operators?

Network functions virtualization (NFV) and software-defined networking (SDN) are the technologies that address this, as well as the security component of 5G. Therefore, there are two very important criteria: one, the agility of new services, and the other is that SDN and NFV will be the core technologies.

Voicendata: What is the role of the cloud in any telecom infrastructure?

Shekar Ayyar: Think about 5G as an evolution of technology and essentially as taking one step further. All of the current architecture that is 2G, 3G or 4G, historically, are more hardware-centric. When you think about the hardware-centric model it means that your infrastructure operating the network is built on a bunch of rigid boxes that have not been able to change. The boxes are not able to deploy new services either. That is a non-cloud model.

When you think about technologies like NFV and SDN, and then, leading to the telco cloud, these are technologies that take you from the old, hardware centric-approach to a new, agile software-centric approach. Then, the transition is not dependent on 4G, 5G transition. You can actually go from your old hardware approach to the new software approach even for 4G or prior technology. There is nothing to prevent that. The reason 5G becomes interesting is that a lot of new global sense is going into thinking of how to set up 5G.

The investment that you are putting in is often more globally focused on 5G and that’s why a lot of conversation is centred on 5G. At the same time, the benefits of the telco cloud, the benefits of SDN and NFV apply equally to 4G and prior architectures on any carriers that want to make that transition.

Voicendata: What would be the USPs on the telco side?

Shekar Ayyar: There are two things that I would re-enforce and re-iterate. First, the technologies and architecture of the telco cloud are going to not just have a USP around the newly-multi-utilized agility, as well as security, but they are going to become a requirement for 5G. It’s not like you have a choice. If you don’t accompany your deployment of the new network with telco cloud underneath, then you are going to have a failed network.

The USP from a transition and transformation standpoint is very much going to be around — faster services around monetization, as well as greater security, than when it translates into what happens to the wireless network, as an example.

You can take your wireless network and take concepts like network slicing and deliver more effectively for different types of traffic.

The way you can deliver these end-to-end slices in a secure way is once again going to be dependent upon not just the 5G protocols, but the ability for the underlining infrastructure to be agile and secure. This, once again, goes back to being a telco cloud using technology like SDN and NFV.

When you think about the proposition from an end user or end customer standpoint, whether you are talking about phone or IoT centre or perhaps, glasses on your head, all of these devices now have tremendous capabilities in terms of not just high bandwidth and low latency, but a new class of applications that are delivered to that device.

If you are an enterprise or a business customer, once again you have a completely new set of choices for even things like connectivity. You rely on Wifi connectivity when you walk into a building or a campus. What if you had a private LTE that powers your entire campus and offers you an alternative to a Wifi. Those are the kinds of things that would be delivered with the new architecture.

Voicendata: How is your solution going to benefit the enterprises?

Shekar Ayyar: Enterprises are today reliant on certain forms of network connectivity that they have been used to traditionally. I will point to two examples, one is MPLS and the other one is Wifi. Enterprises rely on a combination of MPLS and Wifi for broadband as well as M2M communications today. Imagine, you are now in a 5G world. You will have access to SDWAN and SDWAN cloud for better connectivity and IP networks in combination with MPLS service.

You will also have the benefit of technologies like private LTE, private campus 5G radio network, etc. That means you could, for example, have sim card connectivity on every device and walk across your campus with computers with sim cards. You may not need Wifi connectivity anymore or you may have a hybrid of 5G and Wifi.

These are forms of campus networking that are now samples of branch networking and are evolving in the context of the 4G to 5G transition.

Shekar Ayyar: If you think about simplifying the architecture, and if you are a telecom operator and you are offering a service based on a 4G network, you are typically a wireless or a wireline provider, or a combination of both. Let’s say, you are a combination of both. It means that you have some towers, some base stations, central offices, some fiber connectivity, etc. That combination is what allows you to serve a particular circle of consumer and their cell phones as potential fiber to the home. That’s how you operate as a carrier.

VMware comes in with a vCloudNFV solution. Look at all the boxes you have procured previously that were rigid sort of hardware environment that are running your central office and base station. When you think of the way forward, you no longer need to make the rigid hardware infrastructure investments. You can make more agile software-driven architecture with a common foundational technology called vCloud NFV that would become the platform for running all of your network functions.

If you want to launch a new service overnight, you can do that by launching a network function infrastructure. If you want to make changes to your service plan, you can change the way technology operates. That is much easier to do remotely, without having physically going to your datacenter or your point of presence. That’s what the V-cloud and NFV does in a nutshell. It’s a virtualization technology for telecom operators.

Voicendata: What is the TCO of the vCloud of NFV carrier open stack?

Shekar Ayyar: Open stack is essentially one form of managing the underlying telco infrastructure. VMware has a version of open stack much like anybody else’s open stack. We take the open stack bit from open source and make sure that it works well in the other environments around. The reason that a carrier would want to deploy an open stack manager is that they can open source bits to make some changes, and want to go and build any applications on top of it.

You reap more benefits of the architecture by deploying more and more network functions, on top of the same infrastructure foundations.

Voicendata: How does VMware envisage and visualize the telco cloud? How has it benefitted customers across the world?

Shekar Ayyar: Here is a summary of the telco cloud infrastructure. It is a foundation for our telco customers globally. We have 70 carriers globally who are adopting this in some form or the other.

Example, Vodafone Group has adopted the VMware telco cloud for deploying all of their network functions on top of their network architecture across different countries. They talked about 15 countries that are now operational on the infrastructure. The benefits they see are extremely fast and agile deployment of new services, and incrementally. They are able to get much better cost economic benefits when they deploy more network functions on top of the telecom cloud.

In the US, AT&T is working with VMware using our SDWAN technologies for expanding into enterprise branches. They are taking the AT&T value proposition and extending that to the branch using VMware’s V-cloud SDVAN technology. We have also worked with NTT, Japan on smart city solution deployment, on top of the VMware telco cloud infrastructure.

These are examples of reputed and notable carriers globally that are deploying the telco cloud. The cloud itself allows them to go in and operate their infrastructure in a very agile way, where they can consume resources from the cloud very easily.

We acquired a company called Heptio recently and with this acquisition, we now have the capability for Kubernetes-based orchestration. Now, you have tools at your disposal as a telecom operator to go and allow people to use your cloud infrastructure in a much more accessible way than the historic telco network which is a closed network.

Voicendata: Can you also discuss the multi-cloud and the edge cloud?

Shekar Ayyar: The private cloud is what all of our enterprise customers use within their data centers. At VMware, we have essentially 600,000 enterprise customers who are using VMware technology for building their internal clouds. Then, there are public clouds like Amazon, IBM, etc. VMware has partnered with Amazon to make sure that our customers have the VMware cloud available on top of the public cloud.

The third cloud area is the telco cloud where we are working with the carriers. The edge cloud is more information in terms of carriers come in a multi-mobile access computing [mac], whereas, there are other forms of extending the backend data center to more of a distributed architecture closer to the edge. So, that is the fourth cloud.

All four clouds — private, public, telco and edge will become very critical and key in terms of the go-forward architecture for building new services. Operators will now become one of the pools of capacity. They have a very credible chance to play in the next evolution of the cloud economy. That’s what is exciting from an operator point of view how they are going to benefit from the telco cloud.

IDC Unveils India Cloud Predictions for 2021 and beyond

Tech Mahindra has announced the launch of WORKSPACE NXT, the latest version of its next-generation…