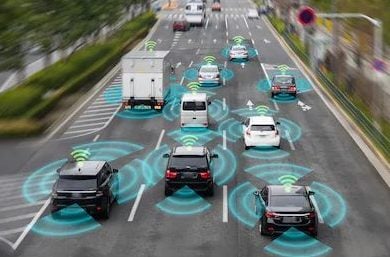 At a traffic signal, we always witness the unfolding of the “fundamental problem of traffic”. As the light turns ‘green’, the first car accelerates, and then the next, and then the next – till the moment you reach the intersection; only to catch the ‘red’?

Had all cars accelerated at the same speed, you would have made it through! Coordination is the problem here, and not the cars. Getting everyone to hit the accelerator at the same time is a challenge after all! This ‘discoordination’ defines how many cars pass the traffic light every time it turns ‘green’ and when one backs up to the next; that’s what really causes long que traffic jams that take forever to clear!

So, more intersections lead to more discoordination which leads to more traffic jams. If this fact is quite well understood, why haven’t Governments and town planners found a solution till now? Well, as a matter a fact, they have! They are called highways. Theoretically, intersections-free highways should lead to better coordination and limit traffic, but alas off-ramps from the highway will eventually back-up on to it due to our slow reaction time!

Practically, a traffic jam can just appear out of nowhere! Take the example of a road with smooth flowing traffic until a stray cow decides to cross the road. The driver who sees it breaks a little; the driver behind him/her doesn’t notice immediately and breaks a little harder than necessary, the driver behind him/her does the same until someone comes to a complete stop. This means that cars that were once running at optimum speeds must now also stop, though the cow is long gone – leaving a ‘phantom’ intersection.

This is what happens when you’re stuck in traffic, thinking there must have been a major accident and the traffic is over with no wreckage in sight! You and other drivers will continue to pass this ‘phantom’ intersection, cause of which is long gone. This chain reaction doesn’t even need an external cause, in fact, a driver simply changing lanes causes the exact same result!

So what exactly needs to be done? Simple, change the way we drive! Our goal as drivers should always be to maintain the same distance from the vehicle ahead, as from the vehicle behind – at all times! Except, wishful thinking of better human behavior just won’t cut it! What we need is a structurally systemized solution AKA autonomous vehicles!

There’s an enormous hype around autonomous vehicles, with many enthusiasts and tech-lovers hoping for a completely automated future. Solutions like Adaptive Cruise-Control and Lane-Keeping Assistance have already made their way into the mainstream automotive sector – and the industry will only move forward in the next couple of years.

With respect to the India market, where the driving is chaotic and irregular, the application can take a longer implementation time. According Steven Waslander, associate professor at the University of Toronto Institute for Aerospace Studies and founder of the Toronto Robotics and Artificial Intelligence Laboratory (TRAILab), “While the market is huge for both manufacturing and sales, analysis of new data sets is needed; along with a lot of customization to bring autonomous driving to India.”

Nevertheless, fleets of autonomous vehicles will eventually help resolve traffic problems in the long run. According to a study by Audi, fully automated traffic will reduce travel time by one third – even if there are over ten percent more people on the road. Coupled with smarter traffic management, more people will be able to be transported – more quickly!

The solution is in front of us

The fundamental problem with traffic has always been lack of coordination among people, and the real simple solution to traffic is adding autonomous vehicles to the ‘driving’ equation!

Posted by: VoicenData Bureau
View more posts
Tags:NXP
Want to avoid traffic? Add autonomous vehicles to the driving equation! 0 out of 5 based on 0 ratings. 0 user reviews.
Collaboration – The key to combat IRSF fraud
Looking for a 5G certification program? Nokia is offering a customized one for ICT professionals