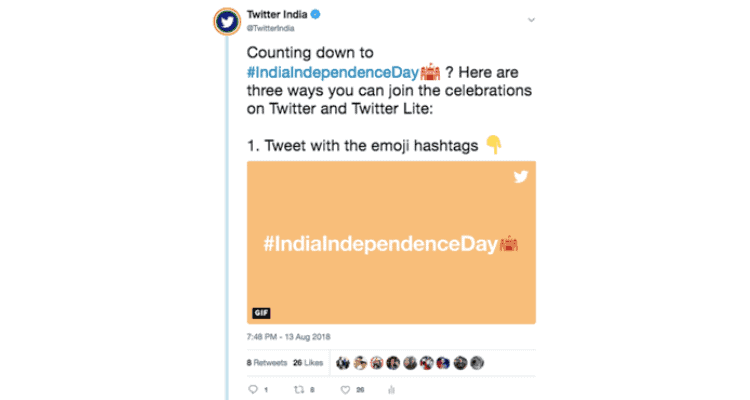 In addition, people can watch the live stream of the Prime Minister’s speech and Independence Day celebrations on Twitter with @ANI, @AajTak, @abpnewstv, @CNNNews18, @economictimes, @CNBCTV18Live, @IndiaToday, @TheQuint, @BloombgergQuint from 7am onwards on August 15. Those who prefer a data-friendly way to follow the celebrations can look forward to live Tweet updates from @IndianExpress and @The_Hindu on Twitter Lite.

Mahima Kaul, Head of Public Policy, Twitter India said, “Twitter is committed to add value to the expression of our users, allowing them to share their experiences and views in a more meaningful and engaging manner. With the launch of Twitter Lite Google Play app, the Red Fort emoji and the live streams from news partners available on Twitter to commemorate India’s 72 years of Independence, we are thrilled to bind Indians across the world with a sense of togetherness and celebration.”

These initiatives by twitter are conceptualized keeping in mind the sentiments and are a delightful way to reinforce a sense of unity and harmony amongst Twitter and Twitter Lite users.

With the launch of Twitter Lite Google Play app in India here are a few ways people can leverage Twitter Lite for more accessible, fast, and data-friendly access to content and conversations on the platform, starting with India’s independence Day:

NEW DELHI: Nearly 75% of marketers chose Instagram as their most preferred channel for sharing…

BENGALURU: Twitter is the best place to know what’s happening around the world and to…