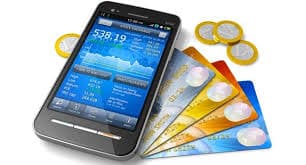 NEW DELHI: Mobile wallet is a very young concept in India that has taken on consumer psyche rapidly. Everyone is loving mobile wallets and embracing them with open arms.

Today, mobile wallet is one of the successful business ideas for start-ups. The evidence lies in the fact that it has surpassed credit cards in terms of the number of users in just a fraction of time. Vijay Shekar Sharma’s venture Paytm alone has 20 million active users. The number is higher than the cumulative number of credit cards in India.

At present, there are 10-12 mobile wallet companies operating in the country.

The Reserve Bank of India (RBI) data speaks of 19.9 million credit cards issued by 55 scheduled commercial banks in India till October 2014 in which HDFC Bank has issued the highest number of credit cards – 5.6 million – followed by 3.3 million by ICICI Bank.

In a very short time the size of mobile wallet market in India grew significantly. According to a study by research firm RNCOS, the current Indian market size for mobile wallet (m-wallet) stands at about Rs 350 crore and is estimated to rise to Rs 1,210 crore by 2019.

Here is a list of top mobile wallet companies in India.

1. PayTM: PayTM is one of the fast growing companies in the mobile wallet space in India. Accroding to Vijay Shekhar Sharma, chairman and managing director of One97 Communications, which operates Paytm, Paytm, which received the mobile wallet service licence from the Reserve Bank of India last year, aims to cross the 100-million users mark by 2016..

With its mobile first strategy, Paytm does more than 30 million orders of various digital and physical goods every month. Launched in 2014, Paytm wallet is India’s dominating mobile payment service platform.

3. Oxigen: Oxigen is one of the oldest players in the payment market while the company jumped into the mobile wallet space just last year. With its service, people can share money with their friends and family over their preferred social networks and messaging platforms like Facebook, WhatsApp, Google+, and Twitter. It allows users to use their wallet to recharge their mobile phones, pay bills and shop across a large number of online merchants.

4.Citrus: Another key player in the mobile wallet space is Citrus Pay which has quickly garnered attention from users in India. It claims to have completed transactions on its platfrom to the tune of 1bn dollars. In addition the company has attracted funding from from investors such as Sequoia Capital, Beenos, and E-Context Asia, among others.

5. mRupee: mRupee, a Tata Teleservices offering in the mobile wallet space, This semi closed wallet is licensed by Reserve Bank of India.

Over the last couple of years of operations mRUPEE has enabled customers pay bills, recharge mobile and send money to their near and dear ones through a wallet platform which operates on a Customer Self Initiated as well as a Retailer Assisted Model thus catering to a wide spectrum of users.

The company looks to create use cases for the customer to use the wallet over traditional payment methods (like cash, cards etc.,) creating a portfolio of frequently transacting customers.

6. FreeCharge: Founded in 2010, FreeCharge claims to be strong in the mobile space with 20 million registered users. It is not a mobile wallet but a mobile recharge platform. The company recently was acquired by Snapdeal for $400.

Freecharge is not a wallet service but is a mobile recharge tool. It has raised $113 million so far from investors like San Francisco-based Valiant Capital Management and Hong Kong-based Tybourne Capital Management. Its investors have decided not to exit following the transaction by Snapdeal.

Though the companies will work separately, there will be a ‘cross-pollination’ of services to help FreeCharge customers buy products from Snapdeal, and vice versa.

Paytm announced the launch of All-in-One QR for merchants across the country. This QR will…