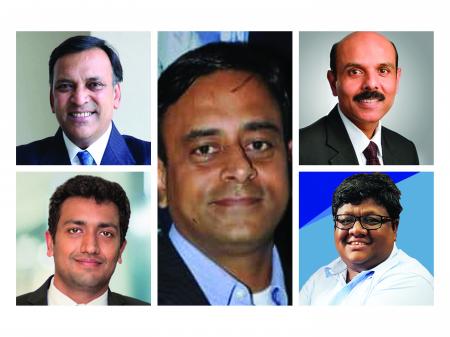 Telcos can support the Digital India dream only if they are financially viable. Will, the government takes some quick long-term measures?

To achieve the objective of providing broadband connectivity for all, the telecom service providers first need to put their own house in order while the government needs to ensure that the industry remains in the pink of health. Highlighting this at the strategy session on Supporting the Digital India dream: How ready is the telecom sector at the Voice&Data 20th Telecom Leadership Forum, Akhil Gupta, Vice Chairman, Bharti Enterprises said that the telecom sector is the most critical industry in the new digital era and everybody associated with the industry should be very proud of it.

“What we are doing is vital and critical for the survival of mankind today. There is nothing more credible and creative than having great telecom networks. Ultimately, broadband for everybody has to be the goal. The digital communications policy provides that,” he said, adding that the industry needs to talk about 5G and taking broadband to everybody’s doorstep or device.

“That can happen only with wireless. The financial health of the industry has to be absolutely top priority of the government, and those concerned, including, the regulator and DoT. This has to be the focus. Unfortunately, we are looking at other enablers. A lot of time is spent on that.”

Earlier, initiating the discussion the session moderator Sukanta Dey, Director, Sdela Consulting highlighted that mobile phones have become the most common means of communication and there is a massive consumption of mobile data. “Lot of consumption has taken place. People are watching different programs across households on their mobile phones. You have to be in tandem with the Government of India in every single step.”

Dey further said that there are three vital issues that need urgent attention. One, the telecom ecosystem has to pay very high taxes. “You have to look at the taxation from all levels. There is a spectrum, spectrum usage, AGR, etc. We should work with the government for GST-like taxation, instead of tax at every level,” he said.

He also pointed out that there is a constant battle between the hyper scalers and the telcos. “Since 2001, the telcos own the customer. Telcos have spent money on acquiring customers. Telcos control the data of the customer. But, the hyper scalers are eating the lunch out of the telcos’ boxes,” he said, adding that payment of taxes levied on the service providers has to be pay-as-you-go. “There should be no advanced payment. If there are some situations where payment is difficult, the government has to understand this.”

Ankit Agarwal, CEO, Connectivity Solutions, STL said it is a critical time for the sector. “We have taken a target of USD 5 trillion for the economy by 2025. By far, the major sector responsible for making that happen will be telecom. There is also the move from 4G to 5G. The new technology will clearly be a very heavy enterprise app. You will be looking at very strong low latency networks, enabling M2M and manufacturing sectors. If we can enable that to happen in a time- and cost-efficient way, that will significantly enable Indian manufacturing and take it towards Industry 4.0. The Government of India should look at this aspect. The government should look at how to make all of this viable.”

He further said that much of the industry investments are going towards paying for spectrum and taxation. “There is very little left for the investments into networks — wireless or wireline. In an optical fiber, India has been significantly under-investing as compared to the rest of the world. Every year, India is investing just 1/12th of China. That’s a massive shortage in the quality of a network. A large portion of our operators also wants to deploy FTTH.”

Growth and innovation is must

Saurabh Kumar Sahu, MD & Client Group Lead (communications, media & technology), Accenture India said there is the need for an accelerated involvement of the Government of India to make telecom a price-sensitive industry in India. “The telecom industry has come through some very severe challenges. Growth and innovation are the two mantras that the industry needs to follow. There needs to be the three Ts — trust, technology, and transformation,” he stated.

“For the trust, we did a survey. Most of those surveyed have posted their trust in the telecom service providers for anything related to connectivity. CSPs have earned the trust of the customers. The government should take notice, and provide the right impetus for the industry to flourish.”

Sahu pointed out that for this to happen in India, technology should reach the right devices, the right language, with the right connectivity. Broadband and wireless should be the essential technologies for the country and the government should look at public-private partnerships.

“For transformation, we need to look at the use cases and provide experience to the customers for transformation. At the end of the day, the tariffs and the revenues can be built for the customers. They can be end-users and enterprises. A fourth T, taxation, is also there. The government should alleviate or reduce the burden for the telecom companies. We have a great opportunity now,” he stated.

P Balaji, Chief Regulatory and Corporate Affairs Officer, Vodafone Idea said the network warriors of all the operators have really done a stupendous job. “In case of Vodafone Idea, we saw traffic go up in a week than what we saw in a year. Traffic patterns also changed during the lockdown when the move happened from the office to the home environments. The fact that the operators were agile and had partnerships in place has proved that the industry still has the agility that it had when it started over 25 years ago. We have demonstrated that in a time of crisis.”

He also stressed that each of the operators has gone through their transformation journeys. “We could manage the world’s largest integration of networks in two years. We concluded during the pandemic. We did a whole new grand launch during the pandemic. This shows the ability of the operator community to do a lot of work, no matter how stressful the environment is. The innovation quotient is also very high for the telcos, and the entire ecosystem.”

Balaji hinted that in days to come, each of the operators will be focussing on cloudification of the core and network virtualization. “The government has taken a call on keeping networks secure. We have done our bit. We are actively pushing Open Radio Networks (O-RAN). The intent is creating innovation for deployments, and ensuring that we can continue to keep the cost of networks as low as possible,” he said.

K Vikram, Senior Director, Industry Verticals, HPE India said that the company is proud to be a co-provider to the three largest telcos. “All of this has happened because of telcos. We have seen the unique creativity brought by each one of the telcos. For aggregating and disaggregating, India is one of the places where creativity brings things to fusion in various ways.” He also informed that HPE offers consumption-based models for the telco’s core and infrastructure.

Talking about the financial health of telcos Gupta said that the best way to run industry is to keep the pricing with the market. “For many reasons, it has been created artificially. Perhaps, the time has come to intervene and put a floor price. We have been able to connect everyone in this country, virtually. Regularly, there has to be some increase.”

P Balaji proposed multiple cuts. “The focus can be on data. A certain amount of data may be made available, and continue to use that. Those who want larger bundles of data can also have it. There should be tiered pricing, focused on data. There are other ways it can be sliced and diced.”

Reacting to the question on the financial health of the telcos Agarwal added that generally there is a view prices will go up, sooner or later. “We can keep that down. The government should also invest significantly in building the networks, and network pieces. USA has gone ahead with USD 20 billion funds to connect rural America. There is a bill in the proposal of USD 94 billion to further connect the rural parts of America. These are great examples of very large funds. We should try and do something similar. That would reduce the network operators’ costs.”

Vikram added that despite the odds the country will overcome all the challenges. “Many industries had earlier started with partnerships from around the world. Perhaps, the next stage is what we can do more indigenously. That is going to reduce cost.”

Defining the growing role of the telecom sector in society Sahu said it is a tip for the Digital India program. “Telecom has the power to disrupt its own sector and multiple other sectors. With the advent of 5G, telecom will lead transformation across all sectors of the country. Support from the government and innovation from the telcos will lead to a great story for India,” he summed up.

A single pane of mirror

Here’s a look at where enterprise technology is moving by understanding the directions of SD-WAN,…

5G is all about use-cases

A race for collaboration and competition

Will they steal each other’s pudding or will they add a cherry? A multi-faceted panel…