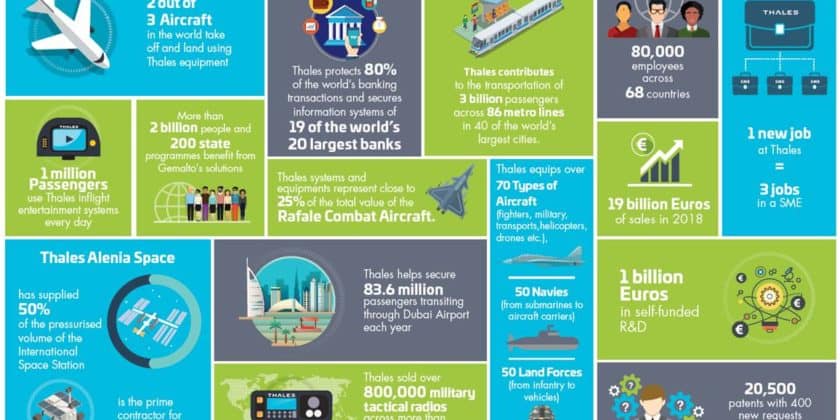 Paris-headquartered Thales has completed the acquisition of Gemalto, creating a global leader in digital identity and security. Completed in 15 months, with Gemalto’s acquisition, Thales will cover the entire critical decision chain in a digital world, from data generation via sensors, to real-time decision support. This acquisition increases Thales’s revenues to €19 billion and self-funded R&D to €1 billion a year, with 80,000 employees in 68 countries.

The larger Thales will master all the technologies underpinning the critical decision chain for companies, organizations and governments. Incorporating the talent and technologies of Gemalto, Thales will develop secure solutions to address the major challenges faced by our societies, such as unmanned air traffic management, data and network cybersecurity, airport security or financial transaction security.

This combination is expected to create a world-class leader with an unrivalled portfolio of digital identity and security solutions based on technologies such as biometry, data protection, and, more broadly, cybersecurity.

Thales will thus provide a seamless response to customers, including critical infrastructure providers such as banks, telecom operators, government agencies, utilities and other industries as they step up to the challenges of identifying people and objects and keeping data secure.

Thales and Gemalto share a passion for the advanced technologies that serve as a common foundation and focus for their 80,000 employees. Research and development (R&D) is at the core of the new Group, with its 3,000 researchers and 28,000 engineers dedicated to R&D. Thales has been developing state-of-the-art technologies to meet the most demanding requirements of customers around the world for decades. Today the Group has become a giant laboratory inventing the world of tomorrow, with a portfolio of 20,500 patents, of which more than 400 new ones were registered in 2018.

With €1 billion a year devoted to self-funded R&D, the Group will continue to innovate in its key markets, drawing in particular on its world-class digital expertise in the Internet of Things, Big Data, artificial intelligence and cybersecurity. The first illustrations are as wide as the Group’s portfolio:

Following this acquisition, Gemalto will form one of Thales’s seven global divisions, to be named Digital Identity and Security (DIS). Gemalto will interact with all of the Group’s civil and defence customers and will significantly strengthen its industrial presence in 68 countries. Thales will considerably expand its operations in Latin America (2,500 employees, up from 600), triple its presence in Northern Asia (1,980, from 700), Southeast Asia (2,500, from 800) and India (1,150, from 400) and North America (6,660 employees, up from 4,600).

“With Gemalto, a global leader in digital identification and data protection, Thales has acquired a set of highly complementary technologies and competencies with applications in all of our five vertical markets, which are now redefined as aerospace; space; ground transportation; digital identity and security; and defence and security. These are the smart technologies that help people make the best choices at every decisive moment. The acquisition is a turning point for the Group’s 80,000 employees. Together, we are creating a giant in digital identity and security with the capabilities to compete in the big leagues worldwide,” said Patrice Caine, Chairman and CEO, Thales.

Posted by: VoicenData Bureau
View more posts
Tags:digital security, Gemalto, IoT
Thales acquires Gemalto to strengthen leadership position in digital security solutions 0 out of 5 based on 0 ratings. 0 user reviews.
5G is not hype, are you ready for it?
ABB-Ericsson co-accelerate wireless automation for flexible factories