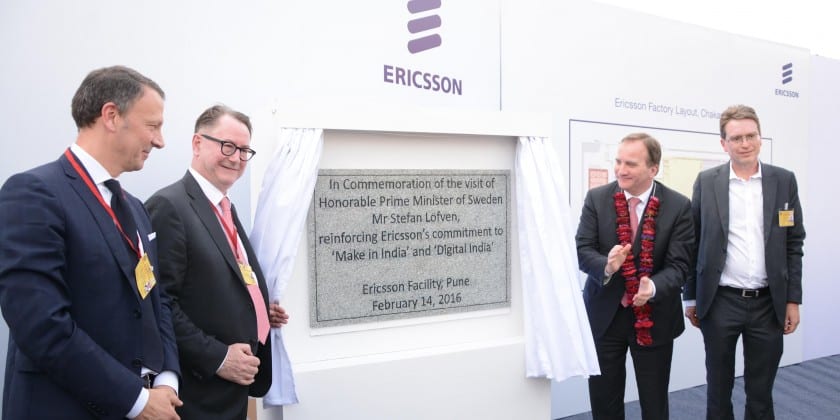 The Prime Minister unveiled commemorative plaques and planted a symbolic sapling. This visit emphasizes the continued importance of Pune as one of the major investment and industrial hubs for Swedish companies in India.

“Prime Minister Löfven was very happy to be in Pune, a city that has a long history of deep economic ties with Sweden. After having witnessed the scale and magnitude of the Make in India Week in Mumbai and a significant bilateral dialogue with PM Modi and other ministers from the Indian side, this visit to Swedish manufacturing facilities is a befitting close to his India tour. In Pune he sees the reality of how Sweden makes in India,” said Harald Sandberg, Ambassador of Sweden to India.

Upon his arrival Mr Löfven visited Ericsson’s upcoming facility at Chakan. Being set up with an initial investment of $15 million, Ericsson’s Chakan plant will serve as an export hub for the Company’s exports to South East Asia, West Asia and Sub Saharan Africa regions. The Company plan to manufacture current and future products for 2G, 3G and 4G technologies at this Plant including radio and microwave products.

“2016 is a milestone year for Ericsson in India as we strengthen our commitment to ‘Make in India’ by setting up our second manufacturing facility here at Chakan. The setting up of this hi-tech, export oriented manufacturing facility will generate employment as well as lead to the development of the vendor eco system in and around Pune. We are delighted and honored to have had the proud privilege of welcoming the Hon’ble Prime Minister, Mr Stefan Löfven to our facility.” said Mr Paolo Colella, Head of Region India, Ericsson.

Swedish companies’ operations in Pune date back to 1957, when a large area of land was allocated to those firms in that city, which was strategically a good location considering the proximity to Mumbai. In the 1960-70s Pune became an important industrial hub, where a second wave of Swedish companies like Alfa Laval, Tetra P

To address its customers’ growing data usage, Bharti Airtel has sought a solution from Ericsson. Airtel will…