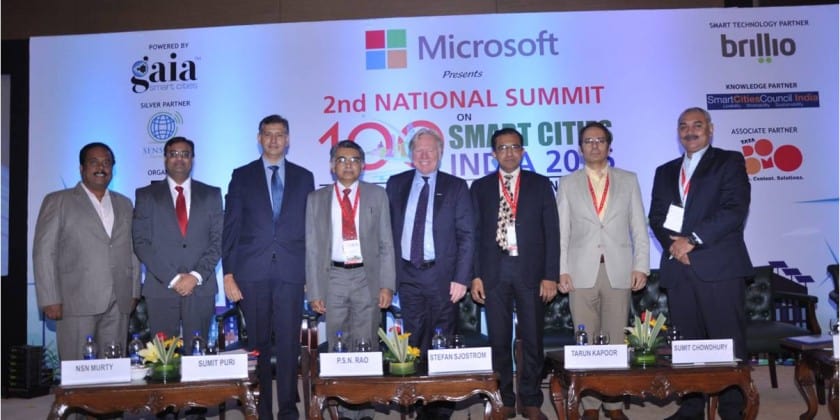 NEW DELHI: The buzz word in the developmental arena, of late, has been smart city and now it took another leap forward with the shift in focus on how the cities will become adaptable to the changes and become sustainable. While speaking at the second edition of ‘National Summit on 100 Smart Cities 2016’, Tarun Kapoor, IAS Principal Secretary, Government of Himachal Pradesh, said “the Himachal Pradesh government is rolling out incentives to help propel the formation of sustainable smart cities.” The second national summit was organised by Bharat Exhibitions
.
The discussions at the summit revolved around the needs, looks and role of ‘Internet of Things’ (IoT) in making the smart cities sustainable.

Kapoor further spoke on how the government of Himachal Pradesh has incentives for those who generate power using waste. “The government has directed to control waste in areas like Manali and Rohtang where efforts are being made so that the hotels and other establishments in the area generate energy from their own waste. These are few steps which have been initiated”, he further added.

The discussion revolved around the development of the smart cities and the role of IoT in a way that they sustain the future developmental dynamics. While giving his key-note address Stefan Sjöström, Vice President Asia, Public Sector, Microsoft Operations, said, “Technology today touches every aspect of our life and one very important aspect is the education domain. The massive e-learning initiatives with over 2000 online courses are changing lives of around 30 million students in the country.” According to him, IoT would touch all aspects of human life.

“Technology is the backbone of all the development that smart cities can expect in future,” he added.

While praising the efforts of the Government of India, Dr. Sumit D Chowdhury, Founder & CEO, Gaia Smart Cities said, “This was for the first time that different departments sat together to discuss and plan a project. Individual projects are not going to help, as it becomes a financial burden, so all departments have to work in tandem, together. Biggest part of the smart cities is behavioral change. They need professionals who would work long term in the city towards the development of the same city.”

Besides education, the impact of health industry too would be a focus of a sustained smart city. “Every year epidemic happens and we know the issues. A design has to be worked out so as to clean the metrics. The major problem is of maintenance. There is vast talent pool, all we need to change is the behavior,” said Sumit Puri, CIO, Max Health Care.
“The urban planning is an important aspect of our future smart cities,” said Prof. Dr. P.S.N. Rao, Head of Housing, School of Planning and Architecture & Chairman, DUAC.

“However, there is no urban planner in the picture, there is much more to uniformity in design. How you mange the garbage, water and other important resources is a very critical part of the whole process. Five years is just a warming period to re-do Indian cities. We surely need much more time. Also, for a better implementation, there should be a CEO appointed for a minimum of ten years for each smart city,” he added.

“We need smart cities as there is a lot of urban pressure and a lot of wastage of resources. The inspirational part is already under way as the small townships that are growing at present are trying to fit into the smart city frame. We need a bag of economically viable projects,” said Pratap Padode, Founder & Director, Smart Cities Council India.

“One cannot have all decisions taken at the municipality level. Some decisions have to be taken by the citizens as well. We have to have the vision as to how our cities are going to become in the next five years and later. Smart spaces have to be focused on. We have to define future-ready cities,” said Indraneel Ghosh, Assistant Vice President, Brillio India.
As a concept, the mission of smart city is a well thought out, well-planned initiative of the Government of India. The cities intend to monetize the assets.

“For a threat challenged country like India, embedded SIM can be a revolution. One embedded SIM can take as many as five subscriptions. This will help address the coverage issue, which is a major problem that is faced while executing the smart plans as many areas do not have connectivity,” said Sharad Arora, Managing Director, Sensorise Digital Services.

By Niladri Dutta, Director, Deloitte India There hasn’t been any global phenomenon over the past…

Ranjeet Koul is the VP and Country Manager, Aeris Communications India Pvt Ltd. He is…

In a report titled, IoT: Driving the Patent Growth Story in India released by the National Association of…