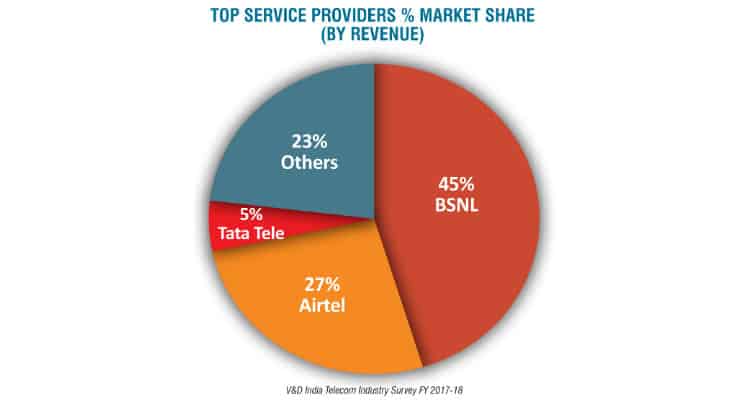 Wireline has been one such a service that has been deemed dead for many years now, but it isn’t actually dying. As has happened all across the telecom value chain, wireless has taken precedence over everything. But, that does not mean others are not important. However, they receive diminished attention. 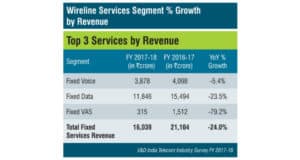 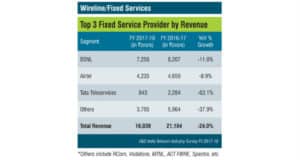 During the FY 2017-18, the wireline business did not witness any drastic move or a trend different than expectations. Fixed line broadband continued to be the driver for subscriber additions, whatever little added. However, at the same time, the rampant adoption of JioFi devices, did adversely impact the prospects of the wireline services. In category B and C circles, where state run BSNL is the sole fixed line service provider in several instances, the JioFi did have an impact as the device enabled creation of a WiFi network within homes as well as experience 4G without the need of changing the Smartphone. The very attractive offers of Jio nailed broadband provider prospects of operators like BSNL during the year. Though BSNL responded by introducing very affordable plans with GBs of data offered per day.Wireline has been one such a service that has been deemed dead for many years now, but it isn’t actually dying. As has happened all across the telecom value chain, wireless has taken precedence over everything. But, that does not mean others are not important. However, they receive diminished attention.

There are only two use cases of a wire line service – broadband and voice. With the changing patterns and preferences, the usage of wirelines for voice has gone down drastically. The other reason to have a wireline, which is broadband Internet, also is reducing in the Indian context. This is not aligned with the global trends where broadband Internet at homes is accessed over a wired connection, which gave a chance to review the incumbent operators. However, in case of India, the fixed line services were primarily in the charge of state-run operators of BSNL and MTNL, which did not keep up with the changing requirements of consumers owing to reasons, hidden from none.

The failure on the part of BSNL and MTNL to offer up to the expectations of consumers, both in terms of technology and services, has led to the failure of the wireline services in India. At the same time, the complicated procedure of RoW (Right of Way) has hampered the infrastructure development around wired assets, that has not only resulted in underserved fixed line market, but also impacted the fibre connectivity in the backhaul for mobile and other services.

Data consumption moving from KBs to MBs to now GBs is demanding more of capacity right up to the premise of a consumer. Such capacities with reliability cannot be offered over copper. This has already pushed large investments in fibre deployment in backhaul as well as in the access networks.

Although, the torch bearer operators of fixed line in India, are challenged with the depleting profits and constraint resources to invest for massive fibre rollout, India is finally set to emerge on the fibre to the Home/Premise map after the launch of Reliance’s JioGiga Fibre services. The massive rollout in terms of pan India coverage and likeliness of services being very affordable is going to result in substantial rise in the fibre subscribers in India. This could be termed as Wireline 3.0 for India where 1.0 was the enabling of wireline voice services and 2.0 being provisioning of broadband Internet over the copper using ADSL technologies.

There are not too many technical challenges that are there for operators to move on to fibre and abandon copper networks. But, what would be a challenge worth to pursue is looking for investments. However, it is expected to see new business models evolving that may forge strategic partnerships and alliances between the operators and the infrastructure providers where they may co-create the networks of the future.