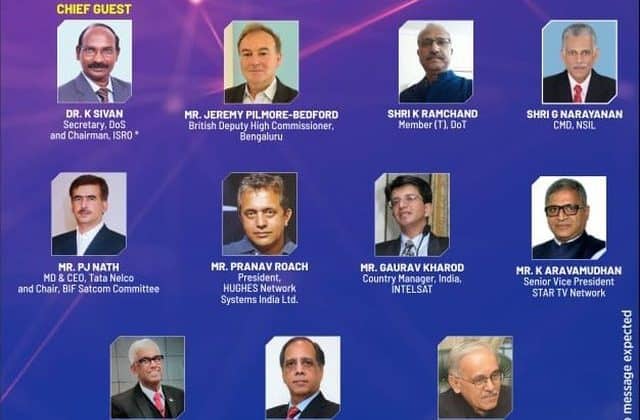 The 6th edition of Broadband India Forum’s annual flagship event – India SatCom 2020 – which is held as an e-summit owing to the pandemic – kickstarted on a high note with key industry stakeholders’ participation today. Recognized as the largest and most comprehensive conference for satellite communications in the country, the two-day virtual event is set on the theme ‘Satellite Broadband – The New Frontier’. The objective of the conference is to bring together all stakeholders of the SatCom ecosystem including the government, the regulatory bodies, industry, academia, startups, legal luminaries, and professionals to deliberate on the latest technology and policy enhancements to provide inclusive access in meeting the goals of ‘Digital India’ and ‘Broadband for All’. The combined stakeholders in the SatCom industry believe that this year’s theme is aptly significant in light of the recent announcement by the Hon’ble Finance Minister of India, Nirmala Sitharaman, on the liberalization of the space sector. 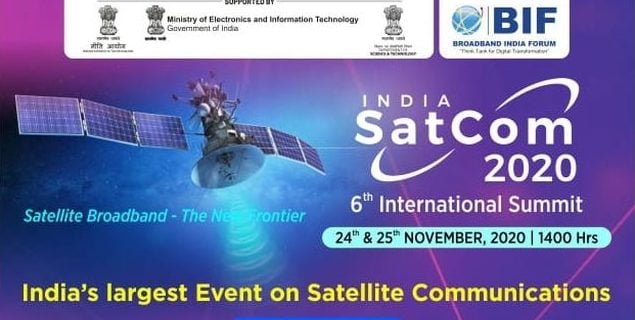 SatCom to fulfill India’s ‘Broadband for All’ mission

The Chief Guest for the occasion, Dr. K Sivan, Secretary, Department of Space and Chairman – ISRO, in a written letter conveyed, “I wish to thank the organisers, Broadband India Forum for their efforts in bringing various stakeholders in the satellite communication ecosystem together to discuss and deliberate how satellite communication can deliver ubiquitous internet service to the masses in a cost effective manner and in keeping with the national mission of AtmaNirbharta by giving high importance to our indigenous initiatives while utilising the latest technologies and also collaborating with the technology leaders in a partnership or collaborative manner to utilize the best technologies and practices. This will provide a platform to discuss various aspects of the technologies, applications and implementation. I’m sure the participants will deliberate on the new trends in SatCom technology, seamless integration with terrestrial technologies, rollout plans and finally reaching all the benefits to the citizens. The people living in unserved and under-served places should get access to these technologies in order to ensure inclusive growth.”

While delivering the inaugural address, T V Ramachandran, President, BIF emphasized the importance of achieving the ‘Broadband for All’ mission. As India touches new frontiers in delivering broadband connections, today, yet another frontier is touched as the country is at the threshold of standing poised to take broadband to remote, rural, semi-urban, and urban parts of India, he said. 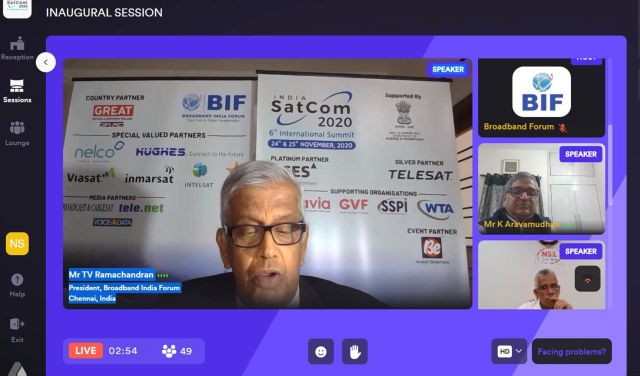 Ramachandran further said, “The Government’s progressive announcement of liberalization of the space sector promises opportunities to bring in new technology and solutions, along with investments and employment opportunities. This would facilitate a number of benefits, including provisioning of broadband to the unserved and underserved in a faster and efficient manner. This becomes all the more relevant in today’s scenario when the Covid-19 pandemic has necessitated Work-from-Anywhere to be the new norm and requires ubiquitous broadband connectivity across the country’s diverse landscape to facilitate the same.” According to Ramachandran, the mission is to take high quality, affordable broadband to one and all in the country and India is exploring ways to take communications to that 15 to 20% of the population that is denied of even basic connectivity. He says broadband in India is largely explored to meet connectivity demand in places where terrestrial communication methods are unable to reach. While emphasizing on the fact that only satellite-based communications have the right potential to deliver the last leg connectivity, he said, “The satellite systems step-in as a ‘Great Messiah for Communications’. While terrestrial communications systems suit the urban and semi-urban parts of India, satellite-based communications are viewed as the most suitable ways to deliver basic connectivity to rural, hinterland, remote, and inaccessible areas. Broadband again becomes indispensable for in-flight, maritime, and on the land ensuring that connectivity is provided anywhere and everywhere to Indian citizens.”

Prime Minister Narendra Modi, while delivering the Independence Day speech at Red Fort on August 15th this year appealed to all stakeholders in the communications sector of India to work on a goal of establishing connectivity for all 600,000 villages in 1,000 days. It is pegged that satellite communication has tremendous scope to leapfrog here and help Indian CSPs achieve this target set out by the PM. Multiple studies have shown how the Indian Government’s ‘Digital India’ and ‘Broadband for All’ initiatives can benefit from satellite broadband. India, with its many remote, unconnected, and difficult-to-access terrains, coupled with extremely low penetration of fixed-line and fiber infrastructure, needs satellite broadband for inclusive and widespread digital connectivity. Remote, unconnected areas that struggle with basic needs such as electricity, are prime candidates for satellite intervention, apart from mountainous and other inhospitable terrains where satellite broadband scores over its terrestrial counterparts in terms of techno-economic feasibility. “The recent path-breaking advancements in satellite technology, could deliver a large amount of bandwidth to a smaller geographical area (via High Throughput Satellites), or deliver wider coverage with low latencies (via LEO/MEO constellations). These new technologies and innovations will help make broadband more affordable, available pan-India and accessible to public agencies, industries, and citizens at large. Satcom can also help augment new technologies, boost commoditization, bri and applications for a variety of services, including disaster/emergency relief and control, besides playing a complementing role in providing the backhaul infrastructure for next-generation networks,” opined P J Nath, MD & CEO, Tata Nelco & Chair, BIF Satcom Committee, in his Keynote address.

The revised Policy Frame-work for Satellite Communications in India is heralded as the most significant development and liberalization in the sector to date. Approved by the Cabinet, the aim of the policy is to develop a healthy and thriving communications satellite and ground equipment industry as well as satellite communications service industry in India. Also, the policy’s bold aim is to use and further the development of the capabilities built in India in the area of satellites, launch vehicles, and ground equipment design, and sustaining these capabilities is an equally important aim. Making available the infrastructure built through INSAT to a larger segment of the economy and population is another cornerstone of the Policy. Encouraging the private sector investment in the space industry in India and attracting foreign investments in this area was lauded by all the stakeholders in the communication business. According to K Ramchand, Member (T), DoT (Special Guest of Honour at the event), it is not possible to deliver communication systems to 600,000 villages with just terrestrial-based systems. SatCom here has to be exploited as a back-fall technology to reach the end-user in remote areas. Not only in accomplishing that, SatCom is needed for the realization of 5G, AI, IoT, in-flight connectivity, and maritime communications. 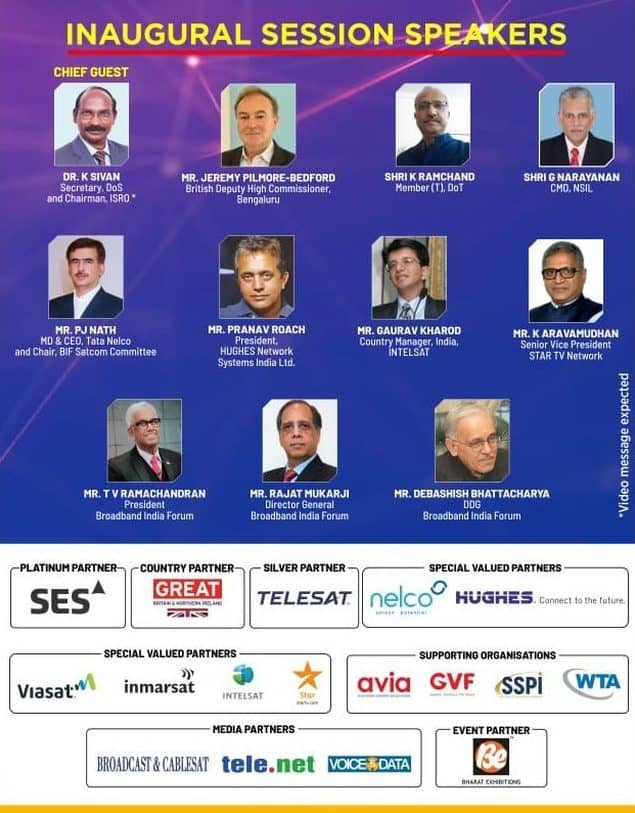 Ramchand emphasized that the Government and DoT in association with TRAI have made note of the requests from key industry players in enforcing “Light Touch Regulations”, ease of doing business, FDIs, and cross country collaborations in boosting the SatCom business in India. On behalf of the industry, Pranav Roach, President, HUGHES Network Systems India Ltd, said, “It is a fact that India’s SatCom industry has to work hard to undergo humungous evolution as spectrums, on the other hand, have evolved from 2G to 5G. SatCom still is at a 2G kind of level and offers a lot of scope for innovation and private industry players to foray and make a difference to the SatCom of India. Policymakers and other stakeholders have to work in unity to fix convenient prices and frame policies that enable the players and most importantly startups to progress with their innovations in space-tech” Gita Krishnankutty, Regional Head of Inward Investment, South India Department for International Trade – The British High Commission, Bengaluru, India, in her address said that India’s commercial satellite communication program, particularly the GSAT series, and its SATCOM policy has enabled the creation of a robust platform and ecosystem in the country and the United Kingdom sees a lot of similarities in the mandates laid down in the policy. She said the UK is keen on partnering with India in its space-tech endeavors and initiatives and co-achieve common SatCom mandates. G Narayanan, CMD, NSIL is confident that the “National Broadband Mission” or “Rashtriya Broadband Abhiyan” will operationalize “Broadband for All”, the objective of National Digital Communications Policy – 2018 (NDCP-18). NBM will bring about to bridge the digital divide in the country, fast track growth of digital communications infrastructure, facilitate digital empowerment & inclusion, and provide affordable, universal access to broadband to all.

K Aravamudhan, Senior Vice President, STAR TV Network, while concluding the session and while delivering the vote of thanks appreciated BIF’s efforts to help facilitate the proliferation of broadband connectivity to all, in a technology-agnostic manner. India SatCom, over the years, has provided a platform to bring together all stakeholders of the SatCom ecosystem to discuss the latest technology enhancements that may be leveraged to tap the true potential of satellite communications. In conclusion, BIF believes India must gainfully exploit the spare satellite capacities over the visible Indian arc, besides further capacity building and innovations via private sector participation to accomplish the mission – “Broadband for All“.