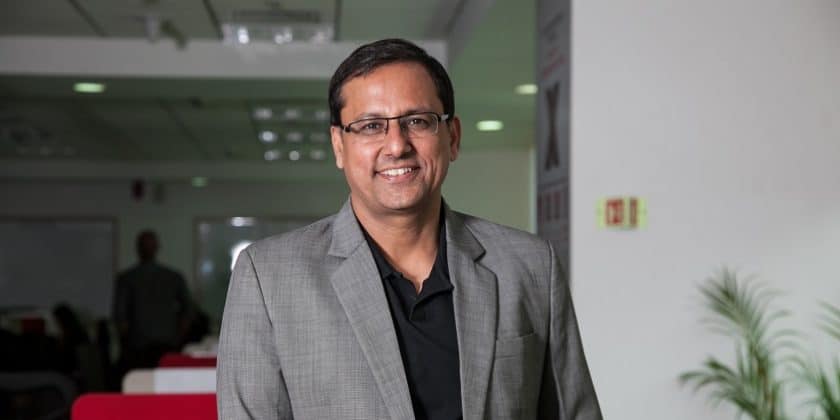 The unprecedented COVID-19 situation has altered the business world in many ways, including the need to adopt digital- and mobile-first strategy. Organization leaders are now dealing not just with the tough balancing act of surviving the ‘now’ and planning for the ‘tomorrow’, but also the swathe of new solutions like Edge, 5G, HPC, and new data center models that is now within their grasp. In a telephonic interview, Lenovo Data Center Group (DCG) Managing Director – India Vivek Sharma talked with Shubhendu Parth about the excitement around cloud and data center technologies, and the solutions for SMBs, specific verticals like Telco, and new pockets like OTT. Excerpts:

Shubhendu Parth (SP): The pandemic has impacted on the world immensely, both organizations and individual behaviour. How do you see it impacting the data center business?
Vivek Sharma (VS): Yes, what is happening today is unprecedented. I don’t think anyone in our lifetime has seen anything like this before. People are even comparing it to the 1918 Spanish Flu pandemic, and hence, this outbreak has reshaped the world in many ways. From the technology perspective, it is accelerating the shift to a digital world, a new normal, and I expect it to stay even in the post-COVID world.

As an organization or consumers, and as individuals, the pandemic is forcing us to press the reboot button and restart the way we work and live. From an enterprise perspective, we all can see the massive shift towards virtual and remote working models; the pace of change has got accelerated. In fact, these technologies have always been available, but people were not implementing them, citing reasons of security or trust, and concerns of productivity. Cut to today, and we now have encouraging estimates that by 2028, 75% of companies will hire remote employees, of which 33% may become full-time remote workers. However, work-from-home is the first immediate change. As we move ahead, we will see more automation, collaboration, and adoption of artificial intelligence (AI).

SP: What about the data center business, particularly from your company standpoint?
VS: When the lockdown began in India, there was a willingness to respond fast, but there was also a lot of uncertainty on how long this phase may last. That’s why the first phase was a lot about the cloud, work-from-home solutions, and VPN ramp-ups because the work environment had to be secured. But as people realized the long-term probability of the scenario, it dawned upon them that they need to weave the perspective into what one’s organization strives to be. Also, as business leaders got to actually see the strength of their digital infrastructure – resilience, or the lack of it – they got to know how well their business processes can stand up to a crisis. They got to see infrastructure agility, architecture, etc. in a new and stark way.

The pay as you go models in the hybrid environment, including one’s own data centers is gaining momentum. So customers are now asking what we can provide as a service.

At Lenovo DCG, we saw a huge interest in, and then a pipeline building up from a perspective of work-from-home solutions, especially around the Virtual Desktop Infrastructure (VDI) space. As we move ahead, the discussions have moved to the plans of a longer-term solution, beyond BCP and DR strategies. This entails mapping out the right IT strategy which covers the emergence and acceleration of the hybrid cloud and focuses on business optimization. The pay as you go models in the hybrid environment, including one’s own data centers is gaining momentum. Customers are now asking what we can provide as a service. A combination of these will be the acceleration in data center outsourcing. If customers want to focus on their core competencies and outsource some of this work on a pay-and-use model, which could be either in a public environment or on a hybrid environment; security, again, becomes paramount.

SP: Is it easy to juggle it all?
VS: I can see that the IT department and the CIOs have more on their plates than ever before because they have been under pressure from all directions to maintain business continuity, and with, probably, fewer resources. They have to plan for the long term while putting out fires of today. They have to address managed security, cost capacity, maintaining business objectives – and these are a constantly moving target as the situation unfolds on a day-to-day basis. Heavy reliance on cloud data and automation is, hence, a big trend.

SP: We are observing the emergence of edge computing in addition to cloud deployments, to support mission-critical activities that require a minimal delay in processing. What is the demand and the adoption trend in India, and elsewhere?
VS: The pandemic has actually accelerated these discussions. Before the pandemic hit, there was a big debate on how an enterprise can balance its workloads between public and private environments. This was because larger enterprises realized, over a period of time, that although public cloud brings a lot of ease of use, orchestration, pay-as-you-use models, it could also be very expensive. They were also trying anyway, to find a balance between the public and the hybrid cloud environments. So what data-security at this point of time has done is – it has highlighted some practical issues. VPN has proven to be a short-term fix for a long-term problem. There are issues of scalability. So VDI will gain more and more traction. As far as collaboration and virtualization are concerned, people will want to do this in a hybrid cloud environment rather than the cloud environment, keeping cost and security as two key parameters. Thus, there would be a balance between public and hybrid cloud strategy. In our conversations, we are noting the heightened attention on the hybrid cloud or hyper converse, and we are also seeing edge computing becoming part of that hybrid cloud discussion.

Owing to network issues or last-mile issues between the data center and outside the data center, there was a need to plan well for mission-critical and time-sensitive decisions.

Owing to network issues or last-mile issues between the data center and outside the data center, there was a need to plan well for mission-critical and time-sensitive decisions. That’s why it will be important to shift some of these workloads, to the edge. High availability of high-performance networking, is also acting as a catalyst. We recently launched a server called Lenovo think system SE350 and it fits all these parameters. It will go around the edge, you can put it on a wall, you can put it on a rack, and you can put it on your desktop. It is water-proof. It already has built-in 4G connectivity and is 5G-enabled. It’s a full-fledged server and it’s the size of a laptop.

SP: What about the SME sector – with the country focusing on Aatmanirbhar Bharat, there is a renewed thrust on enabling the SMEs? How can they use advanced technologies to address some of these challenges?
VS: We have found SMBs to be a very early adopter for hyper-converged critical loads. SMBs are already running SAP-level workloads. We have a customer called Ashika Group. They bought a hyper-converged solution from us which helped them improve that uptime. They found out that they could scale up as the business grows. Similarly, another customer – which is a payment service provider – wanted to get support for growing transaction volume. They moved to a hyper-converged solution and they’re already seeing a 10% improvement in the transaction success rate.

So the SMB segment has clearly proved to be an early, and effective, adopter of some of these technologies. We have also brought in customizations and offerings like True Scale. We give the infrastructure to you and we manage it and you pay for it as a service. You don’t have to necessarily invest in, say, half a million dollars of infrastructure for this to make sense. You can start small, just like you’re doing the public cloud. So, you know, that’s a very powerful message to the sector, regardless of their business size.

Supercomputers will become the bedrock for analytics and AI. It’ll have a critical role to play across verticals, including telecom.

SP: The telecom sector is undergoing a massive change, more so because their core business has transformed from voice to data. How can Lenovo DCG help them?
VS:  As an organization, we are not divided as per verticals, but we have identified sectors where we would play a critical role. These can be on a wide span – from a solutions perspective, from an infrastructure and product perspective. We can help towers with edge and help them do whatever they would want to do with the data that they’re collecting. We also want to build our solutions and products that are 5G-ready. That has been a common theme across Lenovo, both from an edge computing perspective and from an offering’s perspective. It is a work in progress from the angle of the telecom sector.

If you look at the markets that we specifically focus on, we have the hyperscalers, which are really big cloud service providers across the globe. You will note that we’ve worked very closely with them – in fact, six out of the top 10 are our customers now. So we can customize for specific requirements to the hyperscalers, and we look at telecom players also as hyperscalers. So, we customize solutions from a hyper-scale perspective, which is different from enterprise offerings.

Another area where Lenovo DCG stands out is that we are the number one supercomputer vendor on the top 500 list across the globe. In fact, we are bigger than the next three competitors combined on the top 500 list of supercomputers. They’ll become the bedrock for analytics and AI. It’ll have a critical role to play across verticals, including telecom.

SP: The OTT sector has registered a massive growth during the lockdown. That is another fast-growing, big market that needs a lot of data management and analytics. How do you look at that space?
VS: An OTT solution is a subset of whatever goes into an overall data center. I don’t think people will create a data center specifically from an OTT perspective, or even become one of the workloads that run in an overall data center. It just depends on what you know. Financial customers, for example, are hosting it in the data centers locally and running it on a hyper conversion sector. The solution is helping them make improvements; they have already registered a 10% improvement in the transaction success rate.

SP:  What are the investment plans for India, particularly since there is a lot of push by the government on local products and manufacturing?
VS: Lenovo already has a big footprint, from a perspective of what we do in India on an overall-group level. I think that will continue. We are a global MNC, and products are produced in 30 locations around the world, including India. So, we are already part of that journey. We will continue that and continue to support customers in India with the latest technologies and the manufacturing base that we already have.

Posted by: Shubhendu Parth
View more posts
Tags:Cloud, Data centers
“Heavy reliance on cloud data and automation is a big trend” 0 out of 5 based on 0 ratings. 0 user reviews.
As part of our ‘India Go Big’ initiative, NEC intends to double the workforce number by 2023: Aalok Kumar
Ignoring patch updates while working remote? This could be a costly mistake, warns Action1

IDC Unveils India Cloud Predictions for 2021 and beyond