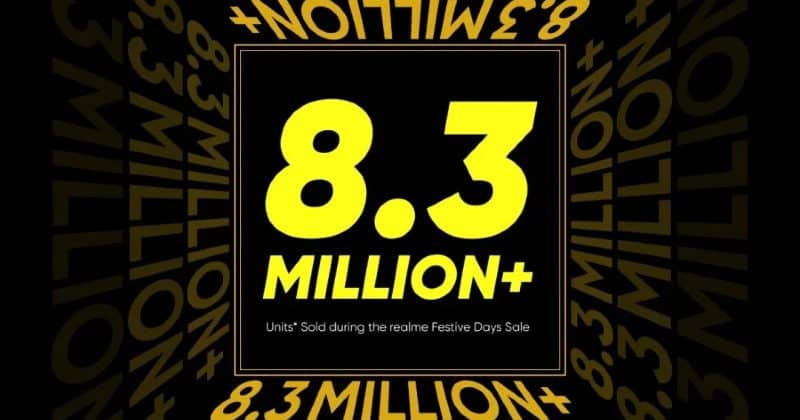 Realme has sold out 8.3 million units out of which 6.3 million were smartphones during realme festive days 2020, with 20% growth compared to festive season last year.

realme also became the fastest brand in the world to reach 50 million sales, among which 30 million come from India. We are also the world’s fastest-growing smartphone brand for five consecutive quarters according to the Counterpoint Q3 2020 Global Smartphone Shipment Report.

realme’s dare to leap approach has resulted in its fast growth within only 30 months since its launch. According to IDC India Monthly Wearable Device Tracker- September 2020 Historical Data Release based on unit shipment. realme was ranked No.1 in the wearable watch Category in India with a 22.1% share during Sept’20.

Elated by the overwhelming response, Madhav Sheth, CEO, realme India, said, “We are overwhelmed to see the adoption of realme products at such a fast pace. realme offers the most blockbuster products which are high on features, style, and performance and is available across price segments.”

The young smartphone brand propelled by a “Dare to Leap” attitude, which is now developed and we are now growing as a tech-trendsetter lifestyle brand. Not only that, realme has topped the smartphone brand quality index, as per a recent report by techARC which is a testimony in itself.

The are living in the era of the technology lifestyle brands. The Internet of Things…