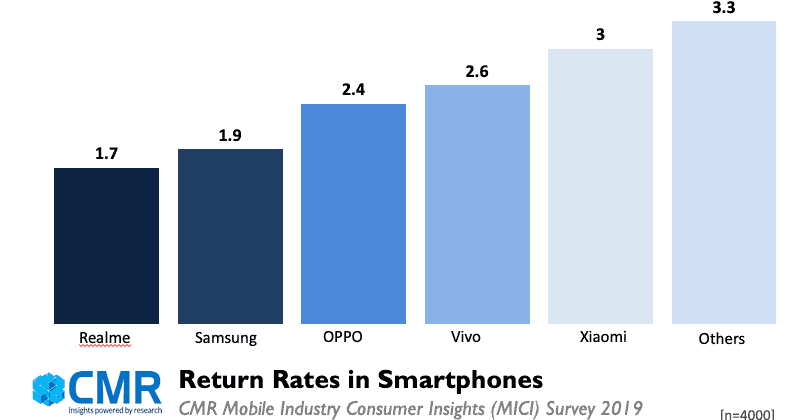 According to Prabhu Ram, Head- Industry Intelligence Group (IIG), CMR, “What the CMR MICI Survey insights provide us is a compelling scenario of what a smartphone brand needs to do to succeed in India. In order to win consumer mindset, smartphone brands need to invest in getting not just product design and product quality right, but they must ensure overall brand experience, and service quality right.”

Smartphone buyers are looking at functional use cases, including performance (88%), build and durability (83%), camera capabilities (80%), battery life (79%), and RAM (78%). These use cases trump more advanced smartphone technological features such as facial recognition and digital wellness, were deemed less important by buyers.

“For consumers looking to buy new smartphones, it is not just factors such as design, and value for money that matters. A key factor influencing smartphone purchase decision is the emotional relationship that consumers feel with smartphone brands, as exemplified by intangible brand factors,” said Satya Mohanty, Head- User Research Practice, CMR.

Across smartphone brands, smartphone users are highly excited about the design aesthetics, camera performance and build quality that phones sport across price bands. In addition, smartphone users indicate more satisfaction with intangible factors that they associate with their smartphones, including reliability and performance.

As per the CMR MICI Survey findings, amongst those surveyed, these were the key findings by smartphone brand:

Smartphone purchases are increasingly influenced by digital. A majority of the consumers research online before buying either online or offline. Most consumers seek product information online. Among consumers who researched online, smartphone ratings on e-commerce websites, including Flipkart and Amazon, also influenced them in their purchase decision.

When it comes to overall aftersales service, Samsung is the clear leader coming first (84%) followed closely by Vivo with 82%, and Oppo at third with 80%.

With an intent to gauge consumer experience with their current smartphone brand, the CMR MICI Survey probed on problems that consumers might have faced, and which, in turn, led them to either have to visit the service center to return the phone, for either repair or replacement.

Around 3% of the total smartphone users visited a service center for the first time within the first six months of their smartphone purchase, during the in warranty period. Most common issues reported by consumers included issues with software and accessories.

“The return rates in smartphone brands provide a measure of consumer satisfaction with their current brand, and in turn, implies that the brands have been able to excel in meeting consumer expectations. Our survey findings report the lowest return rate for brands, such as Realme and Samsung, in comparison to the prevailing industry average,” added Prabhu.

“Smartphone brands which are responsive to consumer needs and focus more holistically on all aspects of consumer experience, including after-sales service, stand to gain in a hyper-competitive smartphone market environment. Realme’s product quality performed the best among the major players in the industry which is impressive. Similarly, Samsung has got everything right, when it comes to their overall aftersales service,” added Prabhu.

A CMR Viewpoint: How will Apple’s new iPhones fare?

On 10th September, Apple unveiled its 2019 generation of iPhones, alongside a greater emphasis on content,…