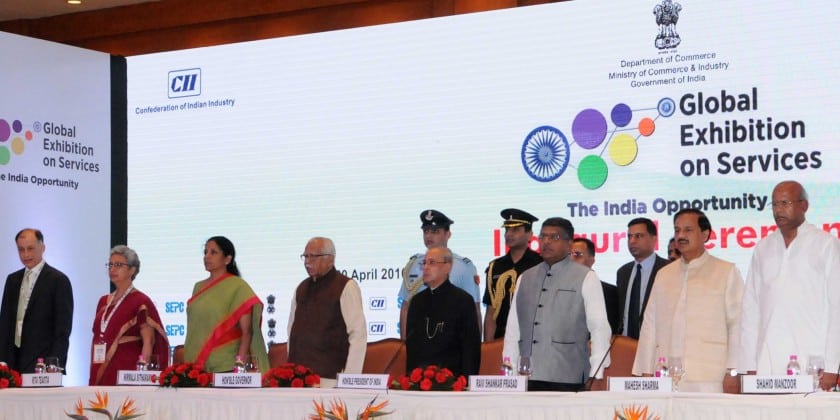 NEW DELHI: The President of India, Pranab Mukherjee said Services sector has emerged today as an agent of change for the country while inaugurating the Second Edition of Global Exhibition on Services -2016 at India Expo Centre & Mart, Greater Noida.

“This sector drives the Indian economy in an inclusive and equitable manner. It is the ‘sector of the current millennium’, in terms of generating employment, skill development, bringing in FDI, enhancing trade and boosting strategic partnerships,” he said.

The President said India has one of fastest growing services sectors in the world with annual growth rate of above 9% since 2001.The contribution of Services Sector of India to overall GDP has increased sharply, from 41% in 1990–91 to 66% in 2014–15.

“In this context, the Global Exhibition on Services (GES) is a much-needed forum to give global visibility to the need to encourage trade in services. The sector with its wide outreach can surpass geographical boundaries and unite nations through the common thread of offering skills and capabilities,” he added.

The President said Services sector will remain for India the key driver of economic growth. It has the potential to lay the path for India to migrate from a developing to a developed economy. It is, therefore, important to design and implement a services-driven development strategy within a coherent and comprehensive policy framework ensuring linkages with key policy areas and overall national development objectives.

The President said there exists a positive correlation between the extent of liberalization and growth in different service subsectors in India. The services that have been liberalized the most in terms of trade and FDI policies have experienced higher growth rates and employment creation opportunities. The results of the Services sector post initial era of liberalization warrant that the process of reforms has to be further intensified to fully utilize its full potential.

The services sector today has emerged as an agent of change for the country. This sector drives the Indian economy in an inclusive and equitable manner. It is the ‘sector of the current millennium’, in terms of generating employment, skill development, bringing in FDI, enhancing trade and boosting strategic partnerships.

The dynamism exhibited by India’s service sector is largely a reflection of the liberalization and reform process carried out in this sector since the 1990s. There exists a positive correlation between the extent of liberalization and growth in different service subsectors in India. The services that have been liberalized the most in terms of trade and FDI policies have experienced higher growth rates and employment creation opportunities.

“The services sector encapsulates many areas such as IT, Telecommunication, Finance, Logistics, Professional Services, Entertainment, Education, Tourism & Hospitality, Retail, and Healthcare. In fact, it includes all sectors, which contribute to the well being of a citizen. We enjoy natural advantages when it comes to services sector due to our beneficial demographic profile. For India, thus, services sector will remain the key driver of economic growth,” President said.

“Services are increasingly embedded in manufacturing and infrastructure. Economies round the globe depend greatly on their attainments in sectors such as IT, creativity and innovation, design, R&D and professional services. India’s famed IT industry has demonstrated the capabilities and potential inherent in the Indian services sector. The IT sector has positioned India globally as a major services hub, becoming a major exporter of IT, BPO and software services. With over 4,300 technology start-ups in the country, India has emerged as the third largest start-up eco-system in the world. The IT sector has become a true success story for the Indian services sector. We need to replicate this success across multiple sectors,” he added.

“Service Sector of India has been one of the biggest sources of employment generation. The share of employment in services sector in 2011-12 was 28.5 per cent which was 4 per cent higher than that in the industry sector. The exponential growth of service sector have opened tremendous job opportunities in the software development; information technology; BPO Services; financial institutions; telecommunications; internet service; aviation industry; tourism and hospitality industry. In the years to come, the service sector will be one the largest generator of employment opportunities in India,” President said.

The ‘Make in India’ initiative of the government is a comprehensive and unprecedented overhaul of outdated processes and policies. It represents a complete change of the Government mindset – a shift from being an issuing authority to becoming a business partner with the basic tenet of ‘Minimum Government, Maximum Governance’.

“To transform the entire ecosystem of public services through the use of information technology, the government has launched the ‘Digital India’ programme. It has been envisaged to transform India into a digitally empowered society and knowledge economy. With these policy initiatives, the entrepreneurial skills and business initiatives of the manufacturing and service industry has to converge to instill a sustainable and robust growth of the economy,” he said.

“When India is embarking upon a mission to become a world leader in manufacturing and service sector, we have to generate skilled work force to cater to domestic and global job market. The ‘Skill India’ initiative of the government is aimed at training over 40 crore people in India in different skills by 2022. The initiatives include National Skill Development Mission, National Policy for Skill Development and Entrepreneurship 2015, Pradhan Mantri Kaushal Vikas Yojana (PMKVY) scheme and the Skill Loan scheme,” he added.

“The government through its ‘Make in India’, ‘Digital India’, ‘Start up India’ and ‘Skilling India’ initiatives is bringing about business process re-engineering in its working to promote ease of doing business. It is now incumbent upon the business leaders to seize this opportunity. The synergy between government and industry can make India achieve significant socio-economic transformation. You all in the service sector have a larger responsibility on your shoulders to become co-partners in the success story of Indian economic development,” he concluded.