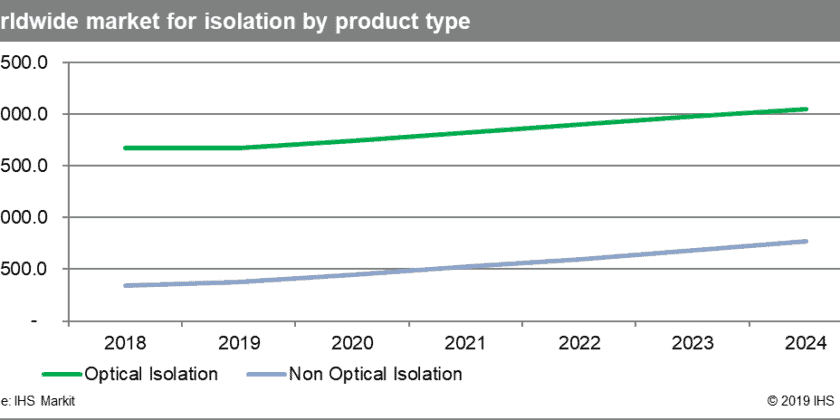 Non-optical revenue has grown significantly larger over the years, expanding to $343 million in 2018.By 2024, this revenue is forecast to more than double, reaching $767 million.

Humble beginnings
A decade ago, non-optical isolation was a very small market—at $54 million in 2010—making it easier for optical manufacturers to dismiss it. There were only a small number of suppliers. There were concerns about how an unproven technology could enter a mature and stable market.

Growing now
Non-optical has met, or sometimes slightly beaten, IHS Markit forecasts for some time now. It already has a track record of growth.

It seems reasonable to assume this well-established trend will continue given that there is no fundamental change expected in the market dynamics that should stop this.

Pros and cons
Non-optical isolation offers high speed, long lifetime, robustness, a better timing specification and lower power consumption. However, for many of the medium and low-end applications, using non-optical isolation is not cost competitive. Also, for some applications, any additional value of changing to non-optical solutions is not worth the risk of a new technology compared to continuing with a tried-and-tested and reliable optical product.

While non-optical has some advantages, these vary on a case-by-case basis. The best choice between optical, magnetic or capacitive will depend on the particular customer’s needs and the specifics and the application.

The pros and cons have not substantially altered over time.

Automotive is going to be big, and a key battleground
The automotive market for isolation is all about electric vehicles. While some opportunities do exist for isolation in internal combustion engine (ICE) vehicles, these are extremely limited, and the overall value of isolation per vehicle is much lower for ICE vehicles.

ICE vehicles’ share of sales will greatly reduce in the coming years due to global warming concerns and the fact that battery prices are projected to fall, making electric vehicles less expensive.

Hydrogen vehicles are not the answer in the short term because their cost is too high, and the technologies and networks have not been developed in time.

Electric cars will win! This is now almost inevitable. The only real question is whether most new vehicles globally will be electric during the 2020s, or whether the electric vehicle takeover might take two decades rather than one. IHS Markit believes the latter will be the case.

Players
In the beginning of the market, a decade ago or more, there were only four major suppliers: Analog Devices (ADI), NVE, Texas Instruments and Silicon Labs. Infineon has also been present in the market for some time, but most other players have only entered the market in earnest in the last five years.

In the early years, until about 2015, ADI dominated the market as the clear leader and was the only supplier perceived as a strong competitor by optical manufacturers. In recent years, ADI has remained No. 1 but Silicon Labs and Texas Instruments have scaled their business more effectively, and reached a similar level, forming a big three in the market.

NVE did not grow its business as well as the others, but remains in the market. Many other players, such as Intersil, Maxim, NXP, STMicroelectronics, Rohm, and others, now sell products to this space.

The non-optical market is young enough that there is still a good opportunity for some of the smaller suppliers to see good growth in the coming years.