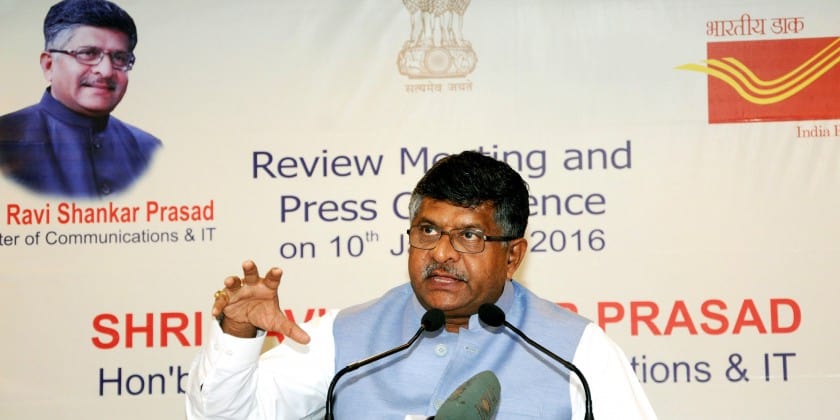 Addressing a Press Conference after taking a review meeting of Departments under his Ministry in Mumbai today, Prasad said several steps are being taken to address the issues of connectivity including spread of broadband, wi-fi and Next Generation Network across the country.

He also said 2500 Wi Fi hotspots will be set up by next fiscal.

Underlining the need for promoting inclusive growth,  Prasad announced that the Government has planned to set up BPOs in the form of Mofussil call centres across India with 48,000 seats.

Out of these, Maharashtra will have 35 call centres of 3500 seats. “BPO Call Centres at small places and mofussil towns will become the crux of digital India” the Minister said.

The Minister said ‘Digital India’ is aimed at empowering the poor and the underprivileged. “ We want a small time tea-seller, a paanvala, a carpenter to seek services through his mobile phones. That is the concept of real ‘Digital India’.

Prasad informed that mobile phone connectivity has increased to 100 crores and internet connectivity to 40 crores. “We will strengthen Digital India for health, education, entertainment and ecommerce and to make India a truly empowered society” he asserted.

Announcing the road map for improving connectivity in Maharashtra, Shri Ravi Shankar Prasad said four (4) lakh connections under Next Generation Network (NGN) will be made available in Maharashtra during the Financial Year 2016-17. NGN Service will be available in Pune, Nagpur, Nashik, Aurangabad, Kolhapur, Kalyan and Nanded in Maharashtra and Goa, which is also part of the Maharashtra Telecom circle. NGN is a packet based network which provides voice, data and other media services at high speed.

The Minister also announced that 174 Wi Fi hotspots will be installed in 58 cities across Maharashtra. He said a new Mobile Intelligence Network will be set up in Pune, which will facilitate pre-paid mobile service customers.

For Mumbai, Prasad said, the MTNL is laying Optical fibre which aims to provide High Speed Broadband to 1 lakh households in the city.

“6,000 city surveillance cameras will be installed at 1800 locations, in collaboration with the Mumbai Police” he added.

Dwelling on the performance of the Postal Department, Prasad said the Government has asked India Post to become an active player in the e commerce segment.

The Minister said that a CAG Survey of 8 states has concluded that the Speed Post Service of India Post has been declared the best courier service.

The Minister further said that India Post Payment Bank would become operational by March 2017 to extend access to formal banking in rural areas.

“India Post is getting very good attention from across the world. Already 40 national and international consortia have evinced interest to partner with the Postal Department for insurance delivery and other financial products.

About Net Neutrality, the Minister said “Telecom Regulatory Authority of India” TRAI is considering the entire nuances of net neutrality, we have to await their report, Thereafter, the Government will take a structured view,”

He however asserted that Internet, being one of the finest creations of human mind, should not remain the monopoly of few .