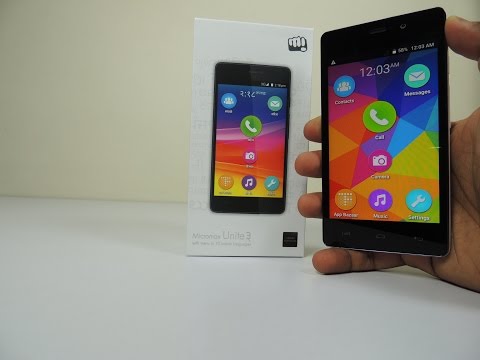 MUMBAI: Micromax’s Unite 3 Q372 is exclusively available on Infibeam at a price of 6,699 and is not available offline yet.

The device is expected to compete with brands like Motorola Moto E, Xiaomi Redmi 2, Lenovo A6000, Microsoft Lumia 535 and the likes.

In terms of specifications, the phone is equipped with 1.3 GHz Mediatek quad-core CPU, 1 GB RAM and the latest Android OS Lollipop 5.0. It sports a 4.7-inch WVGA display with 480*800 screen resolution and 16.7M colour depth.

On the camera front, it has an 8MP AF rear camera and 2MP FF front camera. Unite 3 also supports HD Playback and Recording. Connectivity options include 3G, Wi-Fi, Bluetooth and USB along with a storage capacity of 8 GB internal memory which is expandable upto32 GB.

The new version comes with several upgrades mostly when it comes to storage capacity and OS. However, the internal hardware remains the same. Primarily, it is preloaded with 10 regional languages for the users to communicate in the language they are comfortable with. The users can also change the navigation language of their phone. The phone also offers a feature called Swipe Right to translate or left to transliterate a message.

Unite 3 is equipped with gestures like the Smart Awake and First Touch launchers which is a short cut to clicking images, searching contacts and listening to music directly from the home screen. The other feature called HotKnot allows sharing images, videos, music & browser URLs when two devices touch screen-to-screen. Talkback is another gesture that enables people with weaker eye-sight to take a spoken feedback.

Infibeam: Only eCommerce company with a healthy bottom line