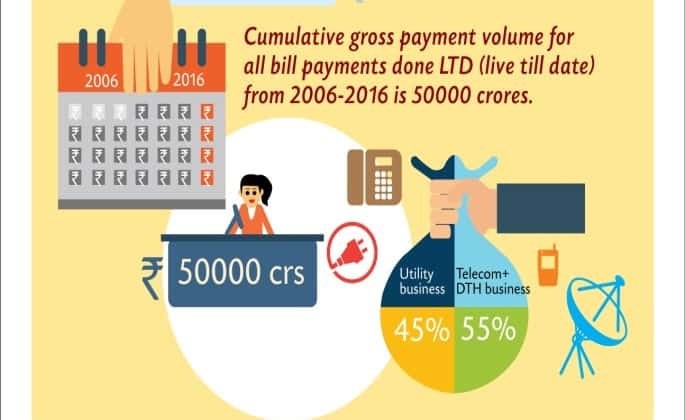 MUMBAI: India’s pioneer and the largest player in the digital payments space, ItzCash has announced that it has crossed Rs 50,000 crore worth of cumulative gross payment volume for all bill payments done by the company for the period 2006 to 2016. The company, which boasts of a strong 40 million-customer base across the country, has set a target to cross Rs 15000 crore in the current year of FY 16-17.

ItzCash has clocked in the country’s highest volume transactions in the utility bill payments space at Rs 6,000 crore for the current year of 2015-16. The company which has the largest distribution network for financial services with more than 75000 franchise outlets across the country is expecting to generate Rs 270 crores in revenues in the current fiscal.

Naveen Surya, Chairman – Payment Council of India & MD – ItzCash, said, “India is eventually gaining a strong foothold on the digital stage and this is getting bigger by the day. While the ‘Digital India’ campaign provided a broader vision, the BBPS, and the UPI initiatives have brought in a fresh momentum to the entire agenda for less cash India.”

“BBPS is a very ambitious platform and is capable of playing the game changer by interconnecting existing networks and being the one-stop-shop for all the bill generators thereby building a more concrete online payment infrastructure. With the initial phase of the platform focused on the utility bills segment we expect to penetrate deeper within our target markets,” he further added.

Currently West & Northern regions contribute to approximately 50% of the company’s revenue. One of the front-runners in applying for BBPS, ItzCash bets big on the ‘anytime anywhere’ bill payment concept and aims a 40-50% growth in its overall revenue growth in the next three years, once the integrated platform goes live. In 2013, RBI had estimated that around 3,080 crore bills were generated amounting to Rs 6,20,000 crore in the top 20 cities. This is expected to rise to Rs 9,30,000 crore by 2019, and BBPS will be one big leap.

With the digitization deadline for the 4th and the final phase soon approaching on 31 st December 2016 the DTH players are eyeing a lion’s share as the fragmented market will not be profitable for cable operators. This inherently is expected to spell a diverse lead for the players in the digital payment space who will be its direct benefactors. ItzCash which derives 25% of its income from the telecom and DTH businesses put together is planning to garner approximately 20% of market share from the segment after BBPS goes live.

ItzCash has adopted an aggressive omni-channel, omni-product strategy catering to the mass middle income segment of the customer pyramid. The company caters to mu ltiple consumer segments including ‘unbanked’ and ‘under-banked’ population of the country who has a bank account but would have not utilized the same for several reasons. The company thus envisions providing the conveniences of digitized payment transactions to as many people as possible across consumer segments.