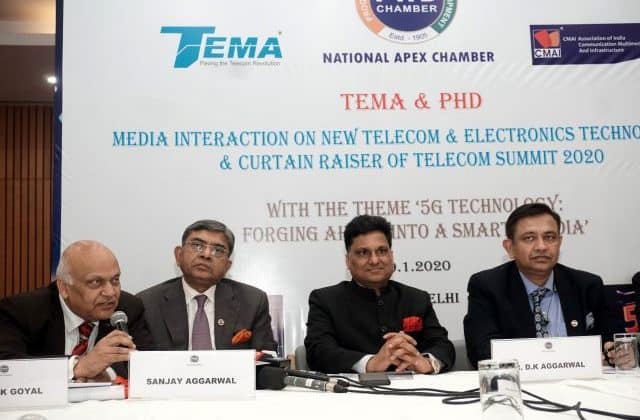 No comments
As the global telecom players are progressively testing and launching 5G in phases in a few countries, India is still lamenting on the spectrum auctioning.
Trade and industry body, PHD Chamber of Commerce and Industry has asked the Department of Telecom (DoT) to delay the auction of 5G spectrum by at least 3 to 5 years, so that the government gets proper valuations of 5G spectrum. The Department of Telecom intends to auction the 5G spectrum sometime this year only after having already missed its 2019 deadline.
This opinion was shared by Sandeep Aggarwal, Chairman- Telecom Committee, PHDCCI at the curtain raiser of Telecom Summit 2020. According to Sandeep, if the 5G spectrum is auctioned now, the license fees would be frozen for the next 20 years and the government will lose money.  Also, he says, the operators will also lose since they will be able to monetize bandwidth only after 3-5 years.
Sandeep Aggarwal further said that the government should not charge license fees to the operators for the next 2-3 years after the auction. The government should also charge reasonable prices for 5G waves to make it sustainable as the present economic scenario is not good.
The base price for the 5G spectrum auction has been proposed by the Telecom Regulatory Authority of India and the Indian government is not keen to reduce prices of 5G spectrum for the next round of auction.
PHD Chamber in its budget suggestions also recommended to declare ‘Broadband a ‘utility’
According to Sandeep Aggarwal, the Centre, State, and local authorities should be obliged to improve building codes to include common duct along all roads from National highways, colony roads. Local bodies will also need to make arrangements so that all new houses/ buildings should have high-quality broadband connections.
Aggarwal further added the Indian telecom operators have already invested 150 billion USD in current technology and will be investing 100 billion USD more to roll out newer technologies. To help the operators, the government should launch Telecom Finance Corporation to provide domestic line of credit funding to telcos to procure domestic PMI compliant Equipment.

This is not as official as the popular Big Boss reality TV show, but it…

Recently, HUAWEI CLOUD has launched a global action plan to help customers around the world…