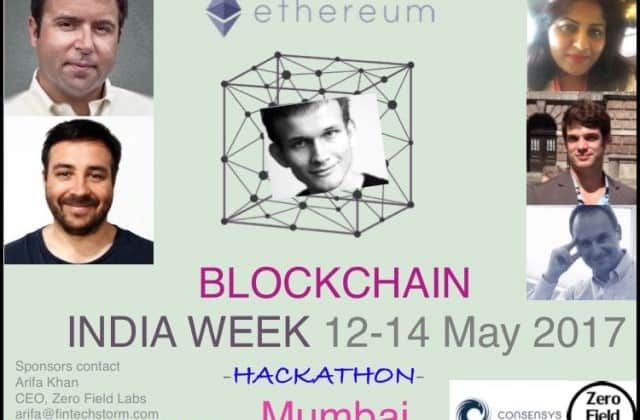 MUMBAI: Zero Field Labs has announced that it is organizing India’s first ever International Blockchain Hackathon. The event will be held in Mumbai, from May 12-14th, 2017 at IIT Mumbai campus in collaboration with the Ethereum Foundation, Enterprise Ethereum Alliance members like Microsoft, ConsenSys and IIT Mumbai.

Zero Field says that around 250 candidates have already registered for the hackathon, notably from countries across the globe – Australia, Ukraine, Europe, China, Malaysia and India. The teams will be vying for Vitalik Buterin Prize for Blockchain Excellence with a cash prize of Rs 1 lakh to be given away by Buterin himself on May 18th.

Many technical experts from Australia, Europe and USA are expected to convene to administer the hackathon. The participants are very diverse comprising of Blockchain developers from marquee banks like J. P. Morgan and IT firms such as Cognizant, L&T Infotech, academia & startups.

The hackathon is a part of the “Blockchain India Week” hosted by Zero Field Labs and Fintech Storm from 12th-19th with a series of blockchain focused activities spread across Mumbai. Vitalik Buterin, inventor of Ethereum and Chief Scientist at Ethereum Foundation will preside over the activities through the week.

The hackathon will be followed by a Vitalik town-hall at IIT Mumbai on  May 16th evening, a Blockchain Masterclass on May 17th at Sofitel Hotel BKC and the main flagship Ethereum India Summit on May 18th at Taj Mahal Palace Hotel, Apollo Bunder, Mumbai. Other key speakers invited are Ashish Chauhan, CEO of BSE, Rahul Bhasin, MD of Barings Private Equity, J A Chowdary, IT Adviser to Andhra Pradesh Govt. An Enterprise Ethereum Alliance India Launch event is scheduled for 17 May evening at Sofitel BKC.

The company has also indicated that Buterin is scheduled to meet Andhra Pradesh Chief Minister Chandrababu Naidu on May 19, after which he will educate the Govt. officials in Vijayawada on adopting next generation technologies for state governance.

Naidu was persuaded of blockchain after understanding the benefits of the technology at the World Economic Forum 2017 in Davos. Soon after, he announced a slew of blockchain initiatives in A.P such as a Blockchain Institute of Excellence and Fintech Valley Vizag.

Fintech Valley will organize the Blockchain Global Summit on October 9-10, 2017 where Buterin and Arifa Khan, CEO Zero Field Labs, are invited to speak, and has also announced a Million Dollar Competition for the best startup. Arifa Khan hosted India’s first ever Blockchain India Summit 6 Dec 2016 with Buterin as Chief Guest.

Khan is a pioneer of the blockchain movement in India advising and educating the Government, and regulatory bodies like RBI and playing a substantive role in building the blockchain eco-system and facilitating collaborative relationships between the fledgling developer community, enterprises and inventors. Blockchain India Week is being sponsored by Zero Field Labs, Microsoft, Cognizant, L&T Infotech and ConsenSys.

A first in the country, Tamil Nadu unveils policies on Blockchain, cybersecurity and AI

The world has not seen anything like the Covid-19 pandemic before. Today we need to…