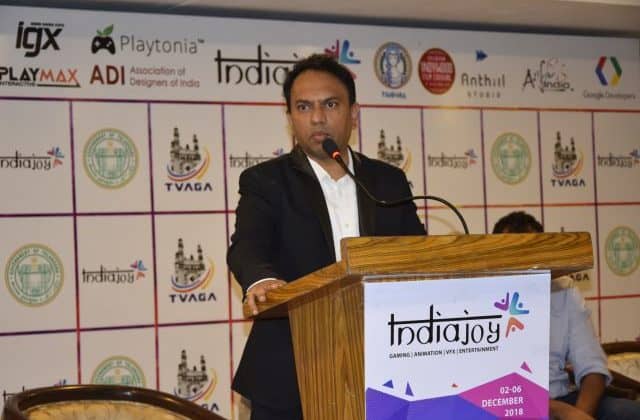 “The gaming industry in India is growing at a rapid pace. Especially given the rapid adoption of cheap smartphones in India combined with the very affordable high-speed internet, the gaming market in India is exploding with growth. The market is no longer limited to children but Indians of all ages are hooked onto games,” expresses Rajeev Chilaka, President TVAGA & Founder of Chota Bheem fame GreenGold Animation.

Rajeev Ckilaka is facilitating IndiaJoy 2018, a gaming event that will make its debut at HICC and HITEX in Hyderabad. It’s a 5-day event supported by Government of Telangana and Telangana VFX, Animation & Gaming Association (TVAGA) during December 2nd – 6th.

According to Chilaka, IndiaJoy will bring all the creators of games along with the entire ecosystem of programmers, platforms, animators and business guys together not just from India but from across the world. This is going to enable cross-pollination of ideas for gaming enthusiasts of different age groups, companies, nationalities and seniority levels. Young innovators can attend the relevant tracks, speeches and networking events designed to help the industry as a whole grow.

Revealing more about the event, Chilaka says, “Indiajoy will put the spotlight on this massively growing industry like never before in India. At the same time, events like Indiwood and Pandora music feat will bring film and music enthusiasts together. IndiaJoy aims to facilitate investment and partnership opportunities for game developers and studios with investors and publishers through India GDC investor-publisher connect, which will have participation from major VC firms and angel investors across India and overseas.”

According to industry analysts, in terms of regions, Asia-Pacific builds out its lead with revenues of $71.4 billion in 2018. With markets like India, Asia-Pacific is home to the fastest-growing games market globally. Driven by increased smartphone adoption, better internet infrastructure, and competitive and immersive mobile games, these markets have boosted the region to capture 52% of the global market.

Hence, the Government of Telangana sees this event as a big boost to the gaming industry and has taken the stride to be the principal promoter of this event. IndiaJoy is also facilitated by Telangana VFX, Animation & Gaming Association (TVAGA) – a non-profit association established to promote & support the growth of Animation, Gaming & Visual effects industry.

Jayesh Ranjan, Principal Secretary, Information Technology Electronics & Communications, Government of Telangana in his address to the media at the curtain raiser said, “IndiaJoy 2018 bring significant value to the industry, largely comprising Animation, Gaming, VFX, AR / VR Content developers, and Investors. We commit to support and help to showcase the event on a global scale. Our goal is to make this event as an annual affair and make IndiaJoy as the go-to trade expo for the finest of minds from the global AVGC (Animation, VFX, Gaming and Comic) industry. This event will be a 360-degree Talent-Entertainment-Networking (TEN) experience.”

The Gaming, Animation Digital Media and Entertainment week will kick off with Asifa CG Meet up on 2nd December. A series of daylong events on 3rd, 4th, 5th and 6th December, featuring Google Day, Indie Game Developers Day, Animation Express-Investor Connect are some of the other highlights of the event.

This event will showcase Unite, Virtual Augmented Mixed Reality, Indywood, and Indian Gaming Expo. Every day, the evening will culminate with Hyderabad Music Festival. An e-sports carnival in association with Playmax is another attraction with a range of PC games, Console games to indulge.

The event hopes to attract a large number of gaming enthusiasts with its PlaymaxESports Carnival, which will feature games like PUBG, WWE, FIFA, LoL, DoTA, and Counter-Strike.

Globally-acclaimed smartphone brand, OPPO has partnered with Tencent Games and PUBG Corp to announce the…