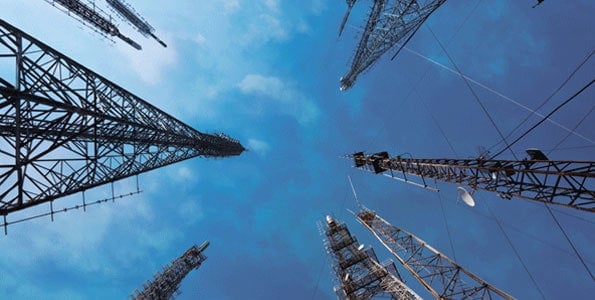 How it seems to be so simple to make a call to a friend who you plan to meet this evening? Or if you want to say Hi to your cousin, she is hardly a touch away. I just boarded a local train in Mumbai and I found almost every second person seems to be completely devoid of their physical existence with their heads dipped inside their phones. Gone are the days when we wrote letters to far away friends and relatives and then waited for months to receive their response. Today we are in the digital age! Matrix was no fiction and so we see it happening, rather, we are the letters of the page being folded, and so it ultimately is up to us, as to how we want the fresh page to look?

With the world moving towards digitally dominant technologies, the consumption of data has grown exponentially by the masses. Today, telecommunications, has changed the way we think, decide and act. From an individual level to an organizational point of view, we are evolving with the machines at every step. Though much of the activity is witnessed in the urban parts of the country, it is gradually penetrating and making inroads in rural areas. This is paving way for technology to reach out to larger part of the rural population, who have largely remained aloof to the benefits that has come with the growth of telecom and technology.

While the growth of telecom has ushered massive growth in technology and has made life better  for the masses, at the same time, it has also drastically affected our environment. Today our cities and towns are getting chocked with poor air which has dropped to alarming levels and are playing havoc with the life and health of the larger part of our population. So there is an urgent need to execute green measures across various platforms to contain the growing threat of air pollution.

One of the crucial pollutants today is diesel-run telecom towers. Diesel being one of the most critical and widely used air pollutants is food to the automobile industry in the first place, followed by the telecom towers industry where at least 4, 02,458 telecom towers across the country are run using diesel gen-sets. However, only 50,461 telecom towers that partially run on green fuel add to a miniscule 12.53 % of the 4, 52,919 total number of telecom towers in the country. The impact is nowhere near negligible. It is important to understand that how 100% use of green energy can save a lot for our coming generations? A 100% Solar-Powered telecom tower has nearly no operational expense and saves approximately 20 litres of diesel from burning in a day. This figure makes up to 7300 litres of consumption of diesel by a telecom tower in a year. One can easily calculate the amount of diesel all these 4.52 lakh plus telecom towers burn each year and the quantum of pollution they create across the country, at any point of time.

In fact, the combined installed capacity for all sites with 1836 green cell sites with each having a minimum of 20 panels and consuming 270 Watt each produces, saves around 9.91 Mega Watt (MW) of power. In another scenario taking into count, existing 2200 green towers in the LWE region, the power generated by these 2200 solar cell sites is 1,40,01,984 KWh per Year, the electricity utilized by these solar powered cell sites stands at 77,26,320 KWh per Year. The total electricity unused, which is 62, 75,664 KWh per Year, is enough to electrify 209 villages. This is, assuming there are 50 families in a village and one family consumes an average of 50 Watts in a month. .

Telecom towers are a key to connect airwaves across the country, but its consumes over two billion litres of diesel every year and generates over five million tonnes of alarming levels of CO2 emissions, which is alarming and a cause of concern for the Indian government.

The government is keen that stakeholders should build renewable energy-based mobile tower infrastructure. The Telecom Regulatory Authority of India’s (TRAI) policy measures on Green Telecom Policy has mandated that the proportion of hybrid-powered tower sites be increased to 33 per cent in urban areas and 75 per cent in rural areas by year 2020. TRAI has also pointed out its concerns that the CO2 emission levels from the Indian mobile telecom sector has moved up by more than 70 per cent over the past three years.

While the urban areas are striving for more and more greenery, the rural areas still have the advantage of living amidst the green. Deploying typical diesel run tower sites in these areas, is like turning the rural areas too, vulnerable to pollution. Moreover, , unlike towns and cities, rural areas generally have ample of unused land, which can be utilized for deploying renewable energy cells powered by solar, that run a telecom tower. By the end, it is interesting to know that if all the existing 4,02,458 diesel run telecom towers across the country are powered with renewable energy or solar energy, the annual savings could be around Rs 19,896 crore, which would be a gift for the coming generations to breathe in clean air.

With over one billion mobile users in India, which is projected to grow 5%  in next 4-5 years, calls for more sophisticated networks with installing environmental-friendly green equipment. The growing need for services like high-speed internet, video streaming, e-facilities and the nearing 5G, the telecom tower industry needs to add one lakh more towersto do justice and address the growing environmental concerns.  .

We are a developing nation and requires a better understanding between the industry and the government. . Since 1995, when for the first time, the then Union Telecom Minister Shri Sukh Ram and the then Chief Minister of West Bengal Shri Jyoti Basu spoke to each other using hand held mobile phones. Since the advent of these mobile devices then, it has been little more than 23 years long journey. . The Indian Telecom market today is highly competitive with telecom sector offering loads of services to consumers and enterprises. As telecom services is growing much faster than ever before,  and competition getting fiercer amongst telecom companies, both the industry and the government must look at the environmental concerns, as any neglect to it will have its own repurcussions.   It has now become imperative to think of sustainable technologies in order to walk through the digital makeover gracefully.

The Roadmap Indian Telcos Need for The 5G Rollout