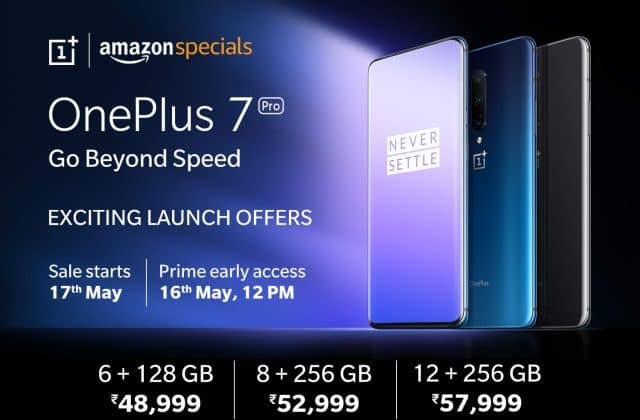 Priced at ₹48,999, the triple camera android sensation OnePlus 7 Pro will go on an early access sale on Amazon.in on May 16th, 12 PM. The regular sale of the phone starts from May 17th on Amazon.

Launched on May 14th, the OnePlus 7 Pro smartphone features a 6.70-inch touchscreen display with a resolution of 1440×3120 pixels at a pixel density of 516 pixels per inch (ppi) and an aspect ratio of 19.5:9. The OnePlus 7 Pro runs OxygenOS based has a 128GB of inbuilt storage. The OnePlus 7 Pro is a dual-SIM (GSM and GSM) smartphone that accepts Nano-SIM on both slots.

Supporting a face unlock feature, the connectivity options on the OnePlus 7 Pro include Wi-Fi 802.11 a/b/g/n/ac, GPS, Bluetooth v5.00, NFC, USB OTG, USB Type-C, 3G, and 4G (with support for Band 40 used by some LTE networks in India) with active 4G on both SIM cards. Sensors on the phone include accelerometer, ambient light sensor, compass/ magnetometer, gyroscope, proximity sensor, and fingerprint sensor. Bearing a glass body, it is available in Almond, Mirror Grey, and Nebula Blue colors.

With the ongoing Covid-19 restrictions, social distancing has become a norm, and social interaction has…