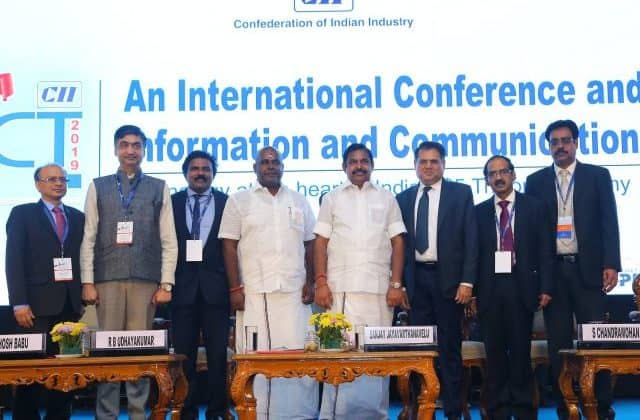 Placing the state in the eyes of the digital world, the Tamil Nadu Government displayed its prowess and future roadmap to its serious uptake of digital technologies to primarily enhance its citizen’s socio-economic condition. The display took place at the 18th edition of CII Connect 2019 on November 7th.

Inaugurated by the Hon’ble Chief Minister of Tamil Nadu, Edappadi K Palaniswami, the 18th edition of CII Connect 2019 turned out to be a two-day International Conference and Exhibition on Information and Communication Technology on the theme Technology at the Heart of India’s $ 5 Trillion Economy.

Connect 2019 is jointly organized by the Confederation of India (CII) along with the Government of Tamil Nadu and Software Technology Parks of India (STPI).

While delivering his inaugural address, Chief Minister Palaniswami revealed that the state of Tamil Nadu has made significant strides in its digital infrastructure. The State, according to him, has received Rs 6500 crore investments in the last year after an appeal was made to the captains of the industry in the state. This has resulted in 60,000 new employments in the state.

The CM further revealed that the first CII Connect was inaugurated by the late Chief Minister J Jayalalithaa in 2001 with a vision that TN would witness great developments in the ICT sector and also remain at the forefront of technological development in all possible ways.

The Chief Minister noted that the peaceful atmosphere and the human resource available in the state have made things possible for investors across the spectrum to come and start their business and the IT industry indeed had seen tremendous growth in the last few years.

Tamil Nadu’s e-governance department led by IAS Dr. Santhosh Babu and IAS Santhosh Mishra used the CII Connect 2019 event as a platform to launch several key digital initiatives that could be of significant use to the citizens of Tamil Nadu.

The products launched were:

Apart from these launches, in the presence of the Chief Minister, an MoU was signed between the Anna University, Kerala Blockchain Academy and IITMAA.

The Chief Minister further indicated that the TN government’s electronics manufacturing policy has seen the creation of an ecosystem for IT parks and start-ups, besides the formulation of e-governance and 12,000 e-Seva centers with 120 services for the benefit of 4.80 crore people till today. As many as 12,524 villages in the state have been provided with internet services backed by an investment of Rs 500 crore.

R B Udhayakumar, Minister for Revenue and Disaster Management and Information Technology, Government of Tamil Nadu, said Tamil Nadu has a vibrant IT policy to help the common man in getting all types of services through the internet, artificial intelligence, blockchain, virtual reality, to name a few. He also said the state has put in place an ecosystem for a knowledge-driven society with the creation of jobs in the IT sector in large numbers besides forming a new infrastructure in areas of health, education, and other aspects of life, both in the urban and rural regions.

Sanjay Jayavarthanavelu, Chairman, CII Southern Region, lauded the efforts of Tamil Nadu Chief Minister Edappadi K Palaniswami in making the state a number one global destination with the unveiling of several path-breaking policy initiatives and measures for the creation of IT corridors and IT Parks. He also noted that the recent meeting between Indian Prime Minister Narendra Modi and Chinese President Xi Jinping at Mahabalipuram in Chennai has brought an impetus to the state’s development in so many ways. He further said that the CII and the Tamil Nadu Government worked in tandem for the overall growth of the industry in the state.

In his closing remarks, S Chandramohan, Chairman, CII Tamil Nadu, thanked Chief Minister of Tamil Nadu for his proactive efforts for the growth of Industry in the state as also attracting investments and making Tamil Nadu the number one state in the country.

Coinciding with CII Connect 2019, a two-day International exhibition is being organized by the Confederation of Indian Industry which showcases the strength of Tamil Nadu in the ICT spectrum. Around 70 plus exhibitors from IT and ITES Companies, Electronic and hardware companies, gaming and animation companies are exhibiting their product and technologies at the exhibition which is expected to attract 10000 business and trade visitors for two days.