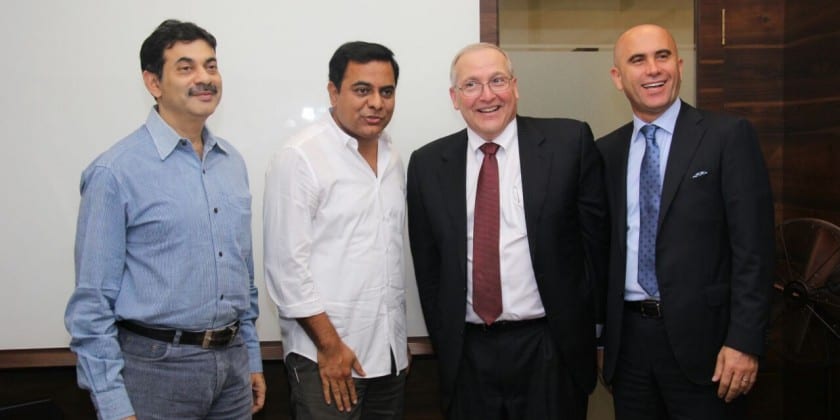 Minister Rao presented to Avaya’s CEO, Kevin Kennedy, the pillars of Digital Telangana initiative, a grand plan to build and deliver connectivity to more than 8.5 million households with more than 32 million people living in rural area and other parts across the Telangana state, a project scheduled to be completed by the end of 2018.

Kennedy presented to Minister Rao the various initiatives that Avaya has been driving in India. He explained that Avaya today is a software and services company that recruits and retains the best the best talent in the country spanning across sales and services operations and its R&D hubs in Hyderabad, Bangalore and Pune.

He said that Avaya India R&D generate 12% annually of Avaya’s global patents, and today owns the innovation cycle of some of Avaya’s strategic solutions. Kennedy also discussed with Minister Rao the various initiatives that the state is currently rolling where Avaya can play a role.

Nidal Abou Ltaif, Avaya International president “T-HUB is a particularly exciting project as it promotes entrepreneurships, creates opportunities and fuels innovation. Avaya has its largest R&D centers in India, one of which is in Hyderabad and there will be immense opportunities to transfer knowledge, expertise and innovation into T-HUB to enable the creative minds of the state to innovate. Last year, we acquired KnoahSoft, a software company in Hyderabad. We are hunting for companies like KnoahSoft especially in data analytics and analytics orchestration on the networking side.”

Minister Rao explained to the Avaya leaderships that investing in the state of Telangana cannot be matched anywhere in the world. “Our self-certification system enables any investor to self-certify quickly and easily, recent legislation that makes our bureaucrats accountable, the abundant, and strategically located land and our human resources that are being trained to offer investors skilled resources from Telangana are unique to India and the world.” Mr. Kennedy said he admires the coherence and aggressiveness of the policies in Telangana and as a company.

Avaya is holding its third annual CXO India Summit in Taj Falaknuma Palace in Hyderabad, where 50 of the country’s top CXOs are meeting with Avaya executives on innovation and digital transformation agenda. Vishal Agrawal, MD for Avaya India ended saying: ”Avaya is determined the help its customers in India to transform to the digital age and is excited with the opportunities to work with private and public sector leaders to innovate in its R&D the right smart digital solutions that addresses the nation’s pressing needs today and in the future.”

Avaya global leadership met with KT Rama Rao, IT Minister, State of Telangana, to discuss ways of collaboration on digitization projects led by the state.