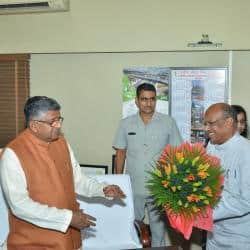 On 3rd June 2019, Ravi Shankar Prasad assumed the role as Cabinet Minister for Communications, Electronics & Information Technology and Law & Justice for the second time. Joining him is Dhotre Sanjay Shamrao, Minister of State for Human Resource Development, Communications and Electronics & Information Technology, who would be assisting the Union Minister in overseeing and executing critical functions of the telecommunications discipline.

Being a senior cabinet minister with knowledge and experience in the telecom industry, Ravi Shankar Prasad in his previous tenure, headed by Prime Minister Narendra Modi, spearheaded the Digital India program. Minister Prasad was instrumental in several key initiatives that re-defined India’s telecom sector and led to many profitable outcomes.

MoS Sanjay Shamrao Dhotre is an eminent parliamentarian with decades of contribution at the grass root level. He is an engineer, agriculturist, and advocate. His areas of interest include Technology for Change, Water Conservation, Infrastructure & Community Development, Environment and Climate Change, Sustainable Agriculture for Marginal Farmers. With such credentials, there is a hope that Minister Dhotre can bring a paradigm shift to rural and last mile connectivity.

Along with External Affairs Minister S Jaishankar (as The Hindu reports that he would be part of 5G dialogues), the two Ministers are projecting a strong power to push the telecom sector to new frontiers. India now pins hope on the two of them to bring effective deployment of new generation technologies that escalates India to new standards and make the country stand on par with its global counterparts

Six critical priorities that lie ahead of Ravi Shankar Prasad and Sanjay Shamrao Dhotre are:

Posted by: Anusha Ashwin
View more posts
Assuming his role again, Union Minister Ravi Shankar Prasad has 6 critical priorities to give the Indian telecom industry a fillip 0 out of 5 based on 0 ratings. 0 user reviews.
New Television Experience via Tata Sky Binge
Are you skilled to take on the 5G onslaught?