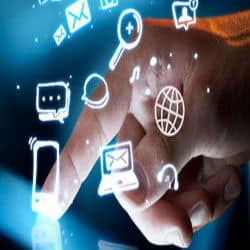 NEW DELHI: The breakneck speed of innovations in Information and Communication Technology (ICT) over the past few decades has radically transformed the way businesses, individuals and even things such as physical devices operate and interact with each other.

The research reveals that post digitization, ‘intelligence’ is being viewed as the next step in IT evolution, with disruptive technologies being developed and deeply permeating various applications and markets all around the world.

Frost & Sullivan’s latest analysis, Top Information and Communication Technologies, 2017, provided an in-depth insight into top ICTs that have the ability to disrupt existing markets as well as unearth new opportunities for market players.

The research further reveals that Internet of Things (IoT) is emerging as a new paradigm for data collection as IoT endpoints generate huge amounts of data that enterprises need to analyze in real time to glean actionable insights. As of today, it is noted that only 0.5 percent of all data generated is ever analyzed and used by enterprises.

“AI has been one of the most funded technologies, attracting large investments from independent and corporate venture capital companies. Already, more than 21,000 patents have been published in this space over the last three years,” observed Frost & Sullivan TechVision Senior Research Analyst Debarun Guha.

“Another technology with huge potential is Blockchain, which is expanding its application scope beyond banking and financial institutions into a wide range of use cases across industries; the global funding to Blockchain start-ups since 2014 is noted to be in excess of $1 billion,” added Frost & Sullivan TechVision Program Manager Kiran Kumar.

The research inferred that the convergence of Blockchain and IoT, combined with Big Data Analytics, is proving to be a viable solution to many challenges such as the authentication and authorization of IoT edge devices. As a result, this will help secure mesh networks and eliminate the need for central brokers. From a regional adoption standpoint, the research discovered that North America continues to dominate the global shares of revenue, adoption and sales in the ICT industry due to high consumer awareness and an increasing number of technology use cases among various industries. Furthermore, several universities and enterprise R&D centers conducting research in the field of emerging ICT technologies are located in North America. This has caused the region to experience a surge in the number of start-ups over the past couple of years.